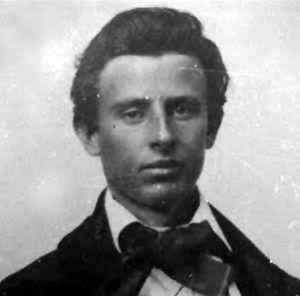 George Donner was one of the leaders of the infamous Donner Party that were migrating from the midwest to California when they were snowbound in the Sierra Nevada mountain range.

George was born of German descent in North Carolina around 1786. Later he moved to  Kentucky before settling with his family outside Springfield, Illinois. There, he worked as a farmer before joining James Reed, who led a party to California. On April 14, 1846, George, his third wife, Tamsen, and their five daughters, began the journey westward. Also joining him was his brother Jacob,  his wife, Elizabeth, and their seven children, as well as several hired hands.

The group followed the Oregon Trail until they reached Fort Bridger, Wyoming, on July 28, 1846. There, they met a man named Lansford Hastings, who told them about a quicker way to California via the Hastings Cutoff. Hastings claimed that his route would reduce some 300 miles from the distance to Sutter’s Fort. His shortcut left the California Trail at Fort Bridger, passed through the Wasatch Mountains, across the Great Salt Lake Desert, looped around the Ruby Mountains, and rejoined the California Trail about seven miles west of modern Elko, Nevada.

Hastings also promised them that the desert was only  40 miles across and that they would find water after 24 hours. However, the desert was 82 miles wide, and water was only found after 48 hours of traveling. He also said that three wagon trains had already successfully traveled the route. This was untrue.

The Donner Party endured a grueling drive through the Wasatch Mountains that delayed them and arrived in California just as an early winter storm closed the trail. After becoming snowbound in the Sierra Nevada Mountains, many died, and some emigrants resorted to cannibalism. George died at his camp in the Alder Creek Valley in Nevada County, California, in March 1847.

Tragic Story of the Donner Party