Rocky Face Ridge (May 7-13, 1864) – This battle that took place in Whitfield County during the 1864 Atlanta Campaign is also known by several other names including Combats at Buzzard Roost, Mill Creek, and Dug Gap. Confederate General Joseph E. Johnston had entrenched his army on the long, high mountain of Rocky Face Ridge and eastward across Crow Valley. As Union Major General William T. Sherman approached, he decided to demonstrate against the position with two columns while he sent a third one through Snake Creek Gap, to the right, to hit the Western & Atlantic Railroad at Resaca. The two columns engaged the enemy at Buzzard Roost (Mill Creek Gap) and at Dug Gap. In the meantime, the third column, under Union Major General James Birdseye McPherson, passed through Snake Creek Gap and on the 9th advanced to the outskirts of Resaca where it found Confederates entrenched. Fearing defeat, McPherson pulled his column back to Snake Creek Gap. On May 10th, Sherman decided to take most of his men and join McPherson to take Resaca. The next morning, Sherman’ s army withdrew from in front of Rocky Face Ridge. Discovering Sherman’s movement, Johnston retired south towards Resaca on May  12th. It is known that the number of casualties in the Union victory were high, there are no estimated numbers. 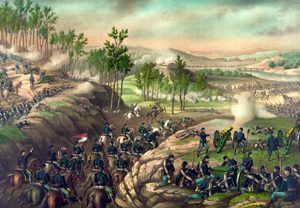 Resaca (May 13-15, 1864) – This battle of the 1864 Atlanta Campaign took place in Gordon and Whitfield Counties. Confederate General Joseph E. Johnston had withdrawn from Rocky Face Ridge to the hills around Resaca, Georgia. On May 13, 1864, the Union troops tested the Rebel lines to pinpoint their whereabouts. The next day, full-scale fighting occurred, and the Union troops were generally repulsed except on the Rebel right flank where Union Major General William T. Sherman did not fully exploit his advantage. On May 15th, the battle continued with no advantage to either side until Sherman sent a force across the Oostanula River, at Lay’s Ferry, towards Johnston’s railroad supply line. Unable to halt this Union movement, Johnston was forced to retire. The inconclusive battle resulted in estimated casualties of 2,747 Union and 2,800 Confederate.

Adairsville (May 17, 1864) – Occurring on May 17, 1864, this battle, which was part of the Atlanta Campaign, took place in Bartow and Gordon Counties. Following the Battle of Resaca, which occurred on May 13-15, 1864, Confederate General Joseph E. Johnston’s army retreated southward while Union Major General William T. Sherman pursued. Failing to find a good defensive position south of Calhoun, Johnston continued to Adairsville while the Rebel cavalry fought a skillful rearguard action. On may 17th, skirmish fire continued throughout the day and into the early evening. Union Major General Oliver O. Howard’s IV Corps ran into entrenched infantry of Lieutenant General William J. Hardee’ s corps, while advancing, about two miles north of Adairsville. The 44th Illinois and 24th Wisconsin (under the command of Major Arthur MacArthur, father of Douglas) attacked Cheatham’s Division at Robert Saxon (the Octagon House) and incurred heavy losses. Three Union divisions prepared for battle, but, Major General George H. Thomas halted them due to the approach of darkness. Sherman then concentrated his men in the Adairsville area to attack Johnston the next day. Johnston had originally expected to find a valley at Adairsville of suitable width to deploy his men and anchor his line with the flanks on hills. The valley, however, was too wide, so Johnston disengaged and withdrew. This delaying action by the Confederates allowed General Joseph E. Johnston to bait a trap at Cassville. The skirmish resulted in an estimated 200 Union casualties and an unknown number of Confederate.

New Hope Church (May 25-26, 1864) – Another battle of the Atlanta Campaign, this battle occurred in Paulding County. After Confederate General Joseph E. Johnston retreated to Allatoona Pass on May 19-20, 1864, Union Major General William T. Sherman decided that he would most likely pay dearly for attacking Johnston there, so he determined to move around Johnston’s left flank and steal a march toward Dallas. Johnston anticipated Sherman’s move and met the Union forces at New Hope Church. Sherman mistakenly surmised that Johnston had a token force and ordered Major General Joseph Hooker’s corps to attack. This corps was severely mauled. On May 26th, both sides en-trenched, and skirmishing continued throughout the day. The Confederate victory resulted in an estimated 1,600 Union casualties. The number of Confederate casualties is unknown.

Dallas (May 26-June 1, 1864) – Also called the Battle of New Hope Church and the Battle of Pumpkinvine Creek, this conflict occurred over several days in Paulding County, as part of the 1864 Atlanta Campaign. Confederate General Joseph E. Johnston’s army fell back from the vicinity of Cassville-Kinston, first to Allatoona Pass and then to the Dallas area and entrenched. Union Major General William T. Sherman’s army tested the Rebel line while entrenching themselves. The Battle of Dallas occurred on May 28th when Lieutenant General William J. Hardee’s corps probed the Union defensive line, held by Major General John A. Logan’s Army of the Tennessee corps, to exploit any weakness or possible withdrawal. Fighting ensued at two different points, but the Rebels were repulsed, suffering high casualties. Sherman continued looking for a way around Johnston’s line, and, on June 1st, his cavalry occupied Allatoona Pass, which had a railroad and would allow his men and supplies to reach him by train. Sherman abandoned his lines at Dallas on June 5th and moved toward the railhead at Allatoona Pass forcing Johnston to follow soon afterward. The Union victory resulted in 2,400 Union casualties and 3,000 Confederate.

Marietta (June 9-July 3, 1864) – Also called Marietta Operations, this was a series of battles that occurred in Cobb County as part of the 1864 Atlanta Campaign. These battles included Brushy Mountain, Gilgal Church, Lost Mountain, Mcaffee’s Cross Road, Mud Creek, Neal Dow Station, Noonday Creek, Pine Hill, Pine Mountain, Rottenwood Creek, and Ruff’s Mill. During the Atlanta Campaign, Union Major General William T. Sherman maneuvered General Joseph E. Johnston’s Confederate army out of several successive defensive positions in Cobb County. This strategy spared the Union army from making costly frontal attacks on the well-situated Confederates. Sherman first found Johnston’s army entrenched in the Marietta area on June 9, 1864. The Confederates had established defensive lines along Brushy, Pine, and Lost Mountains. Sherman extended his forces beyond the Confederate lines, causing a partial Rebel withdrawal to another line of positions. After further pressure and skirmishing from Union forces, Johnston withdrew to an arc-shaped position centered on Kennesaw Mountain on June 18 and 19. Sherman made some unsuccessful attacks on this position but eventually extended the line on his right and forced Johnston to withdraw from the Marietta area on July 2-3. The number of casualties suffered in the Union victory is unknown.

Kolb’s Farm (June 22, 1864) – Occurring in Cobb County, this battle was one of the many that took place in the Atlanta Campaign of 1864. On the night of June 18-19, Confederate General Joseph E. Johnston, fearing envelopment, moved his army to a new, previously selected position astride Kennesaw Mountain, an entrenched arc-shaped line to the west of Marietta, Georgia to protect his supply line, the Western & Atlantic Railroad. Having encountered entrenched Rebels astride Kennesaw Mountain stretching southward, Union General William T. Sherman fixed them in front and extended his right wing to envelop their flank and menace the railroad. Joe Johnston countered by moving John B. Hood’s corps from the left flank to the right on June 22nd. Arriving in his new position at Mt. Zion Church, Hood decided, on his own, to attack. Warned of Hood’s intentions, Union generals John Schofield and Joseph Hooker entrenched. Union artillery and swampy terrain thwarted Hood’s attack and forced him to withdraw with costly casualties. Although the victor, Sherman’s attempts at envelopment had momentarily failed. The Union victory resulted in estimated casualties of 350 Union and 1,000 Confederate.

Kennesaw Mountain (June 27, 1864) – Another battle of the Atlanta Campaign, this conflict took place in Cobb County. On the night of June 18-19, 1864, Confederate General Joseph E. Johnston, fearing envelopment, withdrew his army to a new, previously selected position astride Kennesaw Mountain. This entrenched arc-shaped line, to the north and west of Marietta, Georgia protected the Western & Atlantic Railroad, the supply link to Atlanta. Having defeated Confederate General John B. Hood troops at Kolb’s Farm on the 22nd, Union Major General William T. Sherman was sure that Johnston had stretched his line too thin and, therefore, decided on a frontal attack with some diversions on the flanks. On the morning of June 27th, Sherman sent his troops forward after an artillery bombardment. At first, they made some headway overrunning Confederate pickets south of the Burnt Hickory Road, but attacking an enemy that was dug in was futile. The fighting ended by noon, and Sherman suffered high casualties. The Confederate victory resulted in estimated casualties of 3,000 Union and 1,000 Confederate.

Peachtree Creek (July 20, 1864) – Taking place in Fulton County, this was another battle of the 1864 Atlanta Campaign. Under Confederate General Joseph E. Johnston, the Army of Tennessee had retired south of Peachtree Creek, an east to west flowing stream, about three miles north of Atlanta. Union Major General William T. Sherman split his army into three columns for the assault on Atlanta with Major General George H. Thomas’s Army of the Cumberland moving from the north. Johnston had decided to attack Thomas, but, President Jefferson Davis relieved him of command and appointed General John B. Hood to take his place. Hood attacked Thomas after his army crossed Peachtree Creek. The determined assault threatened to overrun the Union troops at various locations. Ultimately, though, the Yankees held, and the Rebels fell back. The Union victory resulted in estimated casualties of 1,710 Union and 4,796 Confederate.