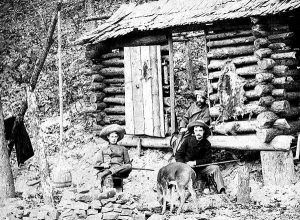 In 1837 three fur trappers, Prewett Sinclair, Philip Thompson, and William Craig, formed a partnership and reportedly built Fort Davy Crockett that same year. The Fort was named after the famous Tennessee frontiersman Davy Crockett who died at the Battle of the Alamo in Texas the previous year.

The fort was established along the Green River in the far northwest corner of Colorado near the Utah border, within a naturally sheltered area called Brown’s Hole. This area had long been a favorite wintering place for mountain men and Indians because of the mild winters and abundant forage and game. It was one of three known 19th-century trading posts on the western side of the Rocky Mountains along with Fort Uncompahgre in Colorado and Fort Uintah in Utah.

Described as a hollow square of one-story log cabins, it served an important trade center with the Native American tribes, fur trappers, and passing travelers. In the winter of 1837-38, famous frontiersman, Kit Carson was employed by the owners of Fort Davy Crockett as a hunter, “having to keep 20 men supplied with meat,” he later wrote. In the spring of 1838, Carson left the fort to join Jim Bridger.

“The fort, as it is called, peered up in the center, upon the winding banks of the Sheetskadee (Green River). The dark mountains rose around it sublimely and the green fields swept away into the deep precipitous gorges more beautiful than I can describe. …We rode into the hollow square and received St. Claire (Prewett Sinclair), the person in charge, the hearty welcome of an old hunter to Fort Davy Crockett.

The fort is a hollow square of one-story log cabins with roofs and floors and mud construction. Around this, we found the conical skin lodges of the squaws of the white trappers, who were away on their fall hunt. And also the lodges of a few Snake Indians, who had preceded their tribe to the winter hunt. Here also were the lodges of Mr. Robinson, a trader, who usually stations himself here to traffic with the Indians and white trappers. His skin lodge was his warehouse, and buffalo robes spread upon the ground his counter on which he displayed his butcher knives, hatchets, powder, lead, fishhooks, and whiskey.”

Less than a week later, however, F.A. Wislizenus, returning to St. Louis, Missouri from the Oregon country, painted a bleak picture of the fort even referring to it as Fort Misery. In part he said:

“The fort itself is the worst thing of the kind that we have seen on our journey . . . in short, the whole establishment appeared somewhat poverty-stricken.”

Afterward, the trading post was commonly known as Fort Misery by local trappers.

In 1839, the last Rocky Mountain rendezvous of the American Fur Company occurred north of Brown’s Hole along the upper Green River in Utah.

After the rendezvous, many of the trappers went to the Fort Davy Crockett for the winter. Demoralized over the poor prospects of trapping and even poorer prices, Philip Thompson and some of the free trappers turned to horse stealing. After a visit to Fort Hall, Idaho, Thompson and a group of 11 others stole over 30 horses from friendly Shoshone Indians. When the thieves returned to Colorado, Thompson’s partners, Prewett Sinclair and William Craig, as well as the other mountain men staying in the area were outraged. Thompson and his allies quickly fled southward with the stolen horses. They were immediately pursued by Joseph Walker, leading Joe Meek, William Craig, Robert Newell, Kit Carson, and 25 others who caught up with the thieves at the junction of the Duchesne and Green Rivers. After a short battle, the horses were recovered and the thieves fled the country.

After this event, the partnership broke up and the post was abandoned. Though the fort was never rebuilt, the area remained vital to the independent fur-trading industry for a few years.

In 1844, when explorer John C. Fremont entered Browns Hole in 1844, the fort was abandoned and in ruins.

The fort was again mentioned by Captain Randolph B. Marcy during his near-fatal winter expedition over the Rocky Mountains in 1857. He stated that “Fort Davy Crockett was now in ruins, its crumbling walls presenting mute evidence of the passing of the hectic days of the fur trade.”