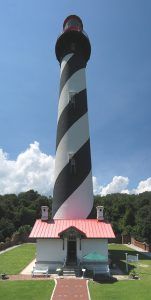 There are numerous reports of spirits who continue to reside on the grounds of the old lighthouse, some of whom are believed to be previous lightkeepers and their families. During its long history, several tragic events have occurred that many feel attribute to the unusually high level of paranormal energy.

One of the first was the unfortunate accident of Juan Andreu who is said to continue to look after his beloved lighthouse. An apparition caught on film by the Ghost Hunters show is believed to be the old lightkeeper. He is often spied moving on the top level of the stairs inside the lighthouse as well as staring through the window.

Another accident occurred on the grounds when three young girls were playing with a handcart near the ocean. When the cart broke they fell into the sea and drowned. Today, there are a number of tales about the girls seen roaming the ground, visitors who hear the voices of children playing, apparitions of the girls sometimes seen swinging on the swing set, laughter, faces seen peering from the windows, and the spirit in a blue dress floating above the grounds.

Though no tragic accident is known to have occurred to a former lightkeeper, Peter Rasmussen, he is also said to keep a watchful eye on the property, leaving behind a strong odor of cigar smoke.

Throughout the history of the lighthouse, San Augustine has often been the site of violence, disease, and murderous storms. Perhaps some of the paranormal energy comes from others who are unknown to the property. Further events include random unexplained noises, objects that have been moved and thrown, a woman’s voice that is sometimes heard, laughter heard from the top of the tower, locked doors that are mysteriously found open, music boxes that turn on by themselves, and cold spots and drafts. 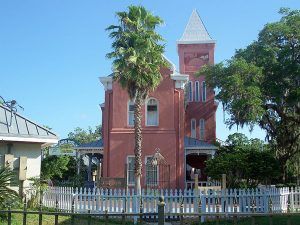 The Old Jail building was built in 1891 and financed by Henry Flagler, owner of the Ponce de Leon Hotel. The former jail building stood on land that Flagler needed for the construction of his hotel and he wanted to ensure a safe and pleasant environment for his customers by creating a secure building to house criminals. He also wanted the building to be farther from the hotel and to blend beautifully into the neighborhood. To accomplish this, the building was designed with a Romanesque Revival style that gave it the distinct appearance of a Victorian home, so much so that it was almost unrecognizable as a jail apart from the barred windows.

Originally built to house up to 72 prisoners, the two-story northern wing of the jail was a general population and maximum security area, a women’s section and a lower level kitchen. Maximum Security housed the most dangerous prisoners and included a Death Row cell. Eight men were hung from the gallows on the jail compound during its history. The two-story southern wing of the Jail consisted of an Office for the Sheriff and living quarters for his family.

During its more than six decades, life inside the jail was in vast contrast with the beauty of its exterior. Conditions for the prisoners were said to have been very poor with meager rations, infrequent bathing toilet facilities that consisted of one bucket per cell and hard labor during the day as prisoners were sent to work in neighborhood farms. Disease, violence, and death were said to be commonplace.

The jail served as the St Johns County Jail until 1953 and just one year later, became a local attraction. In 1987 it was listed on the U. S. National Register of Historic Places. Today, the Old Jail Museum provides guests to St. Augustine with a glimpse into the history of the penal system and the daily life of its prisoners. The guided tour includes the restored jail and sheriff’s living quarters, a display of weapons and artifacts, a pictorial history of the executions, and more.

Today, it is said to be haunted by former inmates and a former warden, Sheriff C.J. Perry. Perry lived with his family in the residential quarters and was known to have been strict and harsh in his punishments. Strange sounds are often reported including chains rustling, the gallows dropping, and dogs barking and whining. Apparitions have been sighted in the form of both inmates and the sheriff.

The Old Jail Museum is located at 167 San Marco Avenue, just north of the downtown district. 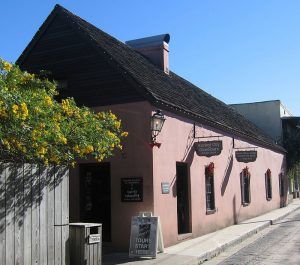 Strictly a military facility, the three parts plus their outbuildings and gardens functioned as a hospital complex during the Second Spanish Period.

In 1818 the west wing burned but the remaining parts stayed in operation. In 1821 the city needed to replace water lines that ran under the building, at which time they discovered thousands of human bones buried underneath the hospital. The hospital remained operational until two years into the American Territorial Period, officially closing in 1823. The east wing was destroyed in a fire in 1895. Only the original Watson house still stands today. Over the years, several buildings were built over the land where the hospital wings once sat. Potter’s Wax Museum is located on the lot where Hospital West was located. The last building over Hospital East was demolished in the early 1960s. Archaeological digs at that time uncovered the original foundations of the hospital building. Using those foundations and the Spanish records of the hospital, the building was reconstructed.

Today the reconstructed east wing of the old hospital is a museum that recreates the hospital practices of the late 1700s. They include a full surgical demonstration of procedures done at the time, an apothecary demonstration discussing the medicines used and their manufacture, and a tour of the medicinal herb gardens.

With the many deaths that have occurred at the old hospital, it comes as no surprise that some of the spirits of those who passed remain today. Paranormal reports tell of hearing cries, moans, and screams as well as ghostly apparitions seen in hospital gowns, with some of the missing limbs, 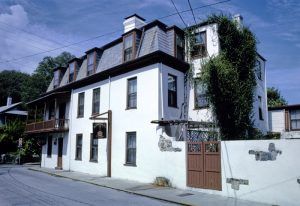 Dating back to 1791 during the city’s Second Spanish Colonial Period, this building is St. Augustine’s “oldest inn” and is listed on the National Register of Historic Places. Gaspar Garcia, the property’s first owner, was a military man who was granted the lot in by the King of Spain, and shortly thereafter built a home. At that time, the threat of invasion was so great that the King of Spain ordered that all houses were to be constructed so that they might “serve as a defense of fortress against those who might attempt to occupy the town.”

In 1838, it was bought by Thomas Dummett and six years later, after his death, it was turned into a boarding house by his daughter, Anna Dummett in 1845. From that time forward, the building has served continuously as a lodging house. The name was officially changed to the St. Francis Inn in 1948. Fully restored today, it continues to cater to St. Augustine visitors.

It is also said to be haunted by what is believed to be several former tenants. Paranormal activity includes sightings of misty spirits, objects being moved and thrown, and some visitors reporting being touched by an unseen apparition.