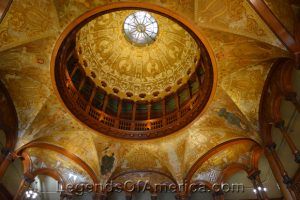 Other restless spirits are also said to continue to reside at the hotel including a young boy who fell to his death in the hotel. A number of people have reported a little boy who tugs at them and asks to play. Others have reported seeing a ball bouncing or rolling down the hallways.

Yet, another mistress is said to haunt the hotel, though this one wasn’t Flagler’s. The story tells of a woman who, while a guest at the hotel, had an affair with a married man which resulted in a pregnancy. Of course, she wanted the man to divorce his wife and marry her. This led to a meeting between the man, his wife, and his mistress at the hotel. Obviously, the meeting didn’t go well for the mistress, as she is said to have emotionally run away from the meeting, fleeing up the stairs to her room. However, along the way, she tripped and fell down the stairs to her death. Called the “Lady in Blue”, this spirit is said to be the one who is most frequently appears, seen and heard crying in the hallways or the dining room.

In addition to sightings of the spirits, other paranormal activity has been reported including the sound of footsteps and voices when no one is present and objects that mysteriously get moved about. 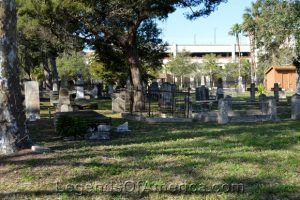 Located just across from the Old City Gate, the Huguenot Cemetery was a Protestant burial ground between the years 1821 and 1884. When the Americans took possession of St. Augustine and Florida Territory, the only burial ground within the city, the Tolomato Cemetery, was reserved for Catholics. Recognizing the need for a Protestant cemetery, an area just outside the city gate was chosen by the new American officials. The cemetery was established just prior to a yellow fever epidemic which claimed the lives of a large number of the city’s residents. Burials continued until 1884 when both Huguenot and Tolomato cemeteries were closed. The cemetery is believed to hold the remains of about 436 people.

Today, the old burial ground is said to be the most haunted cemetery in St. Augustine, so much so that it is often referred to as “Spirit Central”.

One of the most often seen spirits is that of Judge John Stickney. From New York, the judge fought in the Civil War and afterward moved with his three children to St. Augustine. His wife had already passed away. He first worked as a lawyer and was then appointed as a States Attorney for the 6th Judicial Circuit of Florida. He was also a U. S. Commissioner for the Northern District of Florida and Justice of the Peace. He soon became well-known and much liked within the community as he was often known to offer free legal advice. Unfortunately, he contracted yellow fever and died in 1882. He was laid to rest at the popular Huguenot Cemetery and his children moved back north. Some years later, they wished their father’s remains to moved to Washington DC to be re-interred. Gravediggers were hired to do the work, but when they took a short break, they returned to find the grave being robbed. The thieves immediately ran, but they had already made off with some valuables including the Judge’s gold teeth. Today, though his remains are gone, the Judge is said to haunt the graveyard. He is sometimes seen walking the grounds both day and night as if looking for something. Other times he has been spied sitting in a tree.

Another restless spirit that has been seen in the cemetery is a young girl, said to be around 14 years old. She, too, died of yellow fever and her body unceremoniously dumped at the Old City Gates. When no one claimed the body, she was buried in the Huguenot Cemetery. Obviously, she isn’t resting peacefully as numerous people have seen her spirit floating in the trees, Described as wearing a flowing white gown, she often waves at visitors.

Other reports from visitors tell of seeing strange mists and unexplained flashes of light, the sounds of a man laughing, and the crackling of leaves while in the ancient graveyard. Many also describe photos they’ve taken to include strange phenomena such as orbs and misty areas. 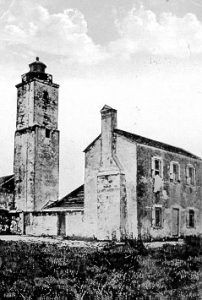 Standing at the north end of Anastasia Island in St. Augustine, Florida, the St. Augustine Light Station is an active lighthouse built in 1874. However, a Spanish watchtower was built on this same site in the late 1500s. Over the years, a series of wooden watchtowers evolved into Florida’s first lighthouse, which was built on the site in May 1824 by Florida’s American territorial government.

The first lightkeeper was a man named Juan Andreu, who was the first Hispanic-American to serve in the Coast Guard and the first to oversee a federal installation of any kind. He continued to serve until 1845. Nine years later, his son, Joseph would take up the same position in 1854. Unfortunately, Juan was killed in an accident when he fell 60 feet to his death when the scaffolding gave way while he was whitewashing the tower in 1859. Joseph’s wife, Maria Mestre de los Dolores Andreu, took over as keeper, becoming the first woman to serve as an official lighthouse keeper in Florida and the first Hispanic-American woman to lead a federal shore installation. She served as keeper of the St. Augustine lighthouse for three years. In 1862, with the Civil War underway, the light was extinguished, fearing it would aid the Union Navy. Paul Arnau, collector of customs in Saint Augustine, removed and buried the lens. It was eventually recovered, but the light was not relit until 1867.

By 1870, the shoreline erosion was threatening the lighthouse and Congress appropriated $100,000 to build a new one. Construction began in 1871 and continued for three years until the beacon was lit in October 1874. The original Fresnel lens remains today as one of only a few such operating lenses in the United States. In the meantime, a jetty of coquina and brush was built to protect the old tower. However, it wasn’t enough as the 1824 lighthouse was destroyed during a storm in 1880.

On August 31, 1886, the Charleston earthquake caused the tower to “sway violently”, according to the keeper’s log, but there was no recorded damage. In 1907, the lighthouse received modern plumbing and in 1925, it received electricity in the keeper’s quarters. The tower light was electrified in 1936. During World War II, Coast Guard men and women trained in St. Augustine, and used the lighthouse as a lookout post for enemy ships and submarines which frequented the coastline.

The U.S. Lighthouse was incorporated into the U.S. Coast Guard in 1939.

In 1955, the light was automated and the positions for three lighthouse keepers slowly dwindled down to two and then one. No longer housing lighthouse families by the 1960s, the keepers’ house was rented to local residents. Eventually, it was declared surplus and suffered a devastating fire at the hands of an unknown arsonist in 1970.

In 1980, the Junior Service League of St. Augustine, which included 16 volunteers began a 15-year campaign to restore the Keepers’ House that was destroyed in the fire. The League then began to restore the lighthouse tower with the assistance of the United States Coast Guard. A maritime museum was opened to the public part-time in 1988 and in the Spring of 1994, the full site was opened to the public full time.

Today, the Lighthouse is St. Augustine’s oldest surviving brick structure and has been restored to the colors and materials used the year 1888. The lighthouse rises 165 feet above sea level. At the top, the original, first-order Fresnel lens still serves the beacon, but today is lit by a 1000 watt bulb, and maintained by the museum and volunteers. The grounds also consist of the 1876 Keepers’ House, two summer kitchens added in 1886, a 1941 U.S. Coast Guard barracks and a 1936 garage that was home to a jeep repair facility during World War II.