She is thought to have been born in Sonora, Mexico, around 1800, to prosperous Spanish ranchers. Little is known about her early life, but she was well educated — learning to read and write.

Shortly after Mexico won its independence from Spain in 1821, Maria, along with her parents, a brother, and two sisters, moved from Mexico to New Mexico territory, settling in Toma, a small village about 30 miles south of Albuquerque. Fiercely independent, she waited until she was 23 years old to marry, which was unusual for Spanish girls of the time who generally married in their teens.

On June 23, 1823, she was wed to a prominent man named Manuel Sisneros in Tome, New Mexico. During the ceremony, the couple was referred to her as Don and Doña, titles given to men and women of quality and high social standing. Continuing to maintain her independence Barceló retained her dowry, her own property, and maiden name. Much attention would later be given to the fact that she was four years older than her groom and four or five months pregnant at the time. The couple would soon have two sons, Jose Pedro and Miguel Antonio Sisneros, who died in infancy. Maria would make up for this by later adopting two daughters. 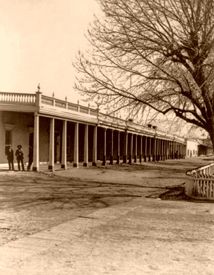 In 1825 the couple relocated to the Santa Fe area, where Maria’s mother was living, and soon established a gambling hall at a mining camp in the Ortiz Mountains. That same year, Barceló was fined by Mexican authorities for operating an illegal gambling operation. That, however, did not stop her. Dealing Monte, she became an extremely efficient and skilled dealer and picked up the nickname “tules,” meaning “reeds,” probably referring to her curvaceous figure or diminutive size. Keeping her earnings and winnings, she moved to Santa Fe in 1835, where she opened her own hotel and casino, signing the deed with her name and excluding her husband from the transaction.

The building was a block-long located on Burro Alley between Palace Avenue and San Francisco Street. Decorated opulently, the interior featured floors covered with the finest European carpets and brick, the ceiling was illuminated with etched glass mirrors, crystal chandeliers lighted the games, rich drapery lined the walls, and customers were seated on expensive imported furnishings. For additional entertainment, Spanish men made their way about the casino, singing melodies, and fandangos were held regularly for visitors. The luxurious casino quickly became a favorite of Santa Fe’s socialites and the many travelers making their way to the city along the Santa Fe Trail. All were welcome — the upper class, traders, soldiers, priests, and immigrants.

Madame La Tules was extremely skilled in dealing Monte, named from the mountain of cards left after a certain number had been dealt, and reading the players and never revealing her own emotions. She knew the betting habits of regular players, and many who didn’t know how to play would try their luck just to be near her. Stakes on the tables were said to have been as much as $50,000. As Santa Fe was a trade hub, Doña Tules increased her wealth and status through shrewd trade deals and investments. In addition to her profits from the hotel and casino, she also made money from real estate, gold ventures, and trading. But she was also a very giving woman – providing money and gifts to the Catholic Church and needy families and contributing more than her share of taxes to keep the government functioning during budget shortfalls.

After 1841 her husband’s name — Manuel Sisneros — stopped appearing in written records. Whether he died or simply left remains unknown. By 1846 when the Mexican-American War erupted, La Tules was at the peak of her career. She was well known and respected for her shrewdness, charm, and business skills and was an influential and respected member of the social elite in Santa Fe. She was friends with Governor Manuel Armijo, the godfather of one of her adopted daughters.

When the U.S. troops came to Santa Fe, she welcomed them not as invaders but as customers and “friends.” When an American civilian government established itself in Santa Fe, she maneuvered her standing in the new society by helping the Americans, passing on information, uncovering a conspiracy and reporting it to officials, and even loaning money to the army to cover payroll and buy provisions. She invited officers and their staff to lavish dinners in her home, furnished lodging to some American troops, and was escorted to a ball at the La Fonda Hotel by General Stephen Kearny.

Her success yielded both admirers and detractors. During her lifetime, she was labeled a courtesan, a madam, a monte dealer, and an expert mule trader. She was called the Mexican “Queen of Sin” in American newspaper articles before, during, and after the war. Josiah Gregg, in his book Commerce of the Prairies, published in 1844, described her as having “very loose habits” and “richly, but tastelessly dressed,” and later —  “She is openly received in the first circles of society: I doubt, in truth, whether there is to be found in the city a lady of more fashionable reputation …”

Susan Magoffin, granddaughter of Kentucky’s first governor and the bride of an American trader, was perhaps one of Doña Barceló’s greatest critics. The Magoffins had traveled to Santa Fe in 1846 and quickly became part of the “high society” of the town. Of La Tules, she would say that she “made her living by running a house where open gambling, drinking, and smoking were enjoyed by all… with no thought of being socially degraded” and described her as “the principal monte-bank keeper in Santa Fé, a stately dame of a certain age, the possessor of a portion of that shrewd sense and fascinating manner necessary to allure the wayward, inexperienced youth to the hall of final ruin.” 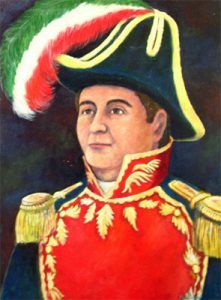 Others would say that she had an illicit affair with Manuel Armijo, the Governor of New Mexico and that she was often romantically involved with U.S. Army officers. Many of these depictions were written to explain why the United States had invaded Mexico and that Doña Barceló represented the immoral nature of the Mexican population. They also represented the narrow-minded and prudish views of the time.

La Tules, who could only speak and read Spanish, was probably unaware of the American publications, as she was known to carefully guard her good name in Santa Fe. In fact, on several occasions when locals had spoken against her, she had taken them to court to defend herself against slanderous comments. In court, she usually won the lawsuits, or the allegations were recanted. Of these accusations, the truth will never be known. But, what is known is that she was a fashionable, shrewd, and brilliant entrepreneur who was the confidante to some of New Mexico’s most powerful political, military, and religious leaders.

When the Mexican-American War was over in 1848, present-day New Mexico became a part of the United States. Though Maria continued operating her gambling hall and hotel for a time, it would never be the social center of Santa Fe that it had once been. She continued to operate her casino and hotel until at least 1849, the same year she became a U.S. Citizen. Afterward, her health declined, and she made her will in 1850. After receiving the Sacraments of Penance, Extreme Unction, and Eucharist from the priest Don José de Jesus Lujan, she died on January 17, 1852, at the age of 47. She left her residence, property, and some $10,000 to her brother, sister, and two adopted daughters, as well as setting aside a contribution to the church and city officials to be used for charitable purposes. She was given an elaborate church funeral attended by politicians, military leaders, and most of the city’s residents. She was one of the last people to be buried in the south chapel of La Parroquia, the Santa Fe parish church — the St. Francis Cathedral today.