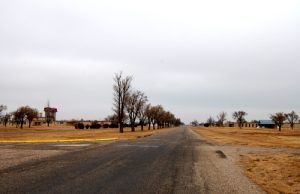 Route 66 passed right by Amarillo’s old English Field Airport and later through the Amarillo Air Force Base in its earliest days. This old segment is blocked by one of the longest runways in the country at what is now known as Rick Husband Amarillo International Airport.

In those first days of Route 66, the old road was still gravel and traveled northwest from Conway, passing by English Field, which was first established in 1929 by Harold English. Prior to English becoming involved, the area was utilized as early as 1920 by the Panhandle Aerial Service, who operated charters and performed air stunts at various events. When Harold English got involved in 1929, the airport was named English Airport and began to grow. 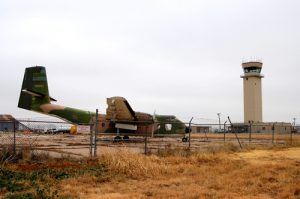 Adjacent to English Field, the Amarillo Army Air Field was established in April 1942. The first troops arrived under Colonel Edward C. Black’s command and began the construction on a number of buildings. Before they were complete, the first classes began in September to train pilots and ground mechanics to service B-17 aircraft. For the next several years, classes continued and expanded to train for B-29 aircraft. However, the operation was closed on September 15, 1946, and its buildings were converted to peacetime uses or destroyed.

In March 1951, the post was reactivated and renamed Amarillo Air Force Base, becoming the first Air Force all-jet mechanic-training base, which also included the training of U.S. soldiers and trainees from foreign countries. Within just a year, the program had reached its planned maximum of 3,500 students and expanding; the installation grew to some 5,000 by 1955. The base continued to develop, adding more technical training courses, including a missile-training department in 1957. The following year, a supply and administration school was relocated to the base from Wyoming. In 1959, the base was re-designated as the Amarillo Technical Training Center when the 4128th Strategic Air Wing agreed with the Air Training Command. By May 1960, the jet-mechanic school had graduated some 100,000 students and trained thousands of others in administrative tasks, procurement, and supply. 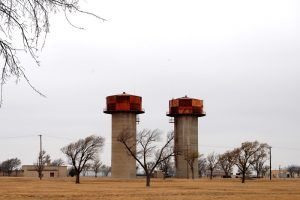 Things began to change when the U.S. Department of Defense started to make plans to close the base in 1964. In February 1966, it became the 3330th Basic Military School and graduated its last troops in December 1968. The base was closed forever at the end of the month, much to the chagrin of Amarillo area businesses.

During its heyday, the base covered more than 5,000 acres, included a full-service hospital, a church, numerous training buildings, and housing for troops and officers.

In the meantime, adjacent English Field had also expanded, and by 1952, the name was changed to Amarillo Air Terminal. After the base was closed, the land was converted to civilian use, and much of it became part of the Amarillo Air Terminal. The primary runway, constructed by the Strategic Air Command base at 13,502 feet, was, for years, the longest commercial runway in the United States, and it is still used by military pilots today. Today, the length of the runway is surpassed only by the JFK International Airport in New York. 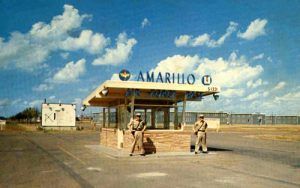 Amarillo Air Force base while active.

Other facilities of the former base were taken over by the Amarillo branch of Texas State Technical Institute in September 1970 and later became the east campus of Amarillo College. Housing units were sold to individuals, many of which remain in use today.

In 1976, the airport changed its name to Amarillo International Airport upon the opening of a U.S. Customs facility. In 2003, it was renamed again after fallen NASA astronaut and Amarillo native Richard Douglas Husband who died in the Space Shuttle Columbia disaster in February 2003.

The long runway, built for the Air Force base, bisected the original Route 66, which was rerouted into Amarillo. This old alignment is one of the few in Texas that cannot be traveled today. Mother Road enthusiasts must detour around the airport by traveling north to Highway 60 to join Amarillo Boulevard or return to I-40.

Old Route 66 ends at a high fence with restriction warnings. The best choice for continuing the journey; is traveling north to Highway 60, where a couple of old service areas can be seen before the highway merges with Amarillo Boulevard, which continues to sport numerous old travel stops along its east end.

The original English Field terminal building was converted to an Air Museum in 1997, but after a decade, it closed in 2007, and its exhibits were sold. Today, a tour through the old Air Force base displays several old buildings in various states of deterioration. However, many are still used by Amarillo College, though they’ve seen better days. The old base church is the best-kept building and still serves parishioners today. 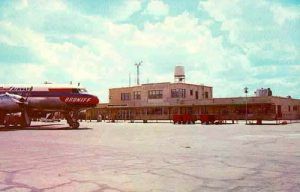 English Field in its heyday 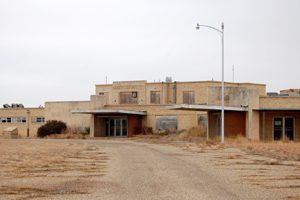