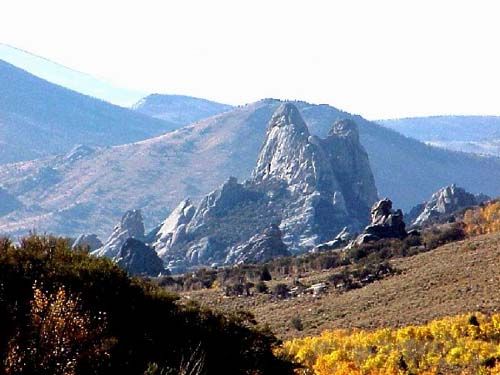 City of Rocks in southern Idaho

Numerous treasures are said to be hidden along the granite spires, sculptured boulders, and canyons of the City of Rocks National Reserve in Idaho. Hundreds of thousands of people passed through here on their way westward, especially after the discovery of gold at Sutter’s Mill in Coloma, California.

Among these hardy pioneers were travelers of the Oregon and California Trails, and later thousands of prospectors when gold was discovered in northern Idaho and Montana. Though the City of Rocks Reserve is off the beaten path and rather isolated today, it was once a busy crossroads of the northern trails from the 1840s through the 1890s.

One treasure tale that is often told is that of a massacre that occurred at Almo Creek. Though the site is depicted by a historical marker, this tale is now thought by many to be untrue. As the legend goes, an immigrant caravan of about 60 wagons took the Sublette Cutoff for the California Road and was attacked by Indians.

Allegedly, the 300 some pioneers held off the attack for days, but in the end, all were massacred with the exception of five who escaped. Massacre sites are often found to contain numerous relics and hidden caches. However, historians today believe the massacre is nothing more than campfire folklore. Because there are no military records, nor newspaper reports that even briefly mention what would have been the second-largest Indian massacre in the 19th century, it is now believed the historical marker, erected in 1938, was done so purely to attract tourists to the area.

However, numerous other treasures are said to be hidden here, primarily along the roadways and trails that led from the gold camps of northern Idaho and Montana to Salt Lake City.

Gold was first discovered on the Clearwater River in northern Idaho in 1860, then the Salmon River in 1861, the Boise River in 1862 and, both silver and gold, near the Owyhee River in 1863. In nearby Montana Territory, richer veins were found along Grasshopper Creek in 1860 and still richer placers at Alder Gulch in 1861. Before long, word spread and prospectors flooded the area as the boomtowns of Idaho City, Silver City, and Florence, Idaho, as well as Virginia City, Nevada City, and Bannack, Montana sprang up to accommodate the many men.

However, the gold strikes brought not only miners and businessmen to the area; it also attracted numerous outlaws, with their minds set upon making an easier living than those toiling in the mines. In no time, the boomtown cities that were built during these strikes were known to have been rough and lawless places where gold dust was the primary monetary exchange. By 1863, a substantial number of outlaws had arrived and organized themselves in groups for the sole purpose of robbing stages, freight wagons, and individuals. Leader of one of these notorious bands was said to have been non other than Henry Plummer, duly elected sheriff of Virginia City and Bannack, Montana in 1863. Though Plummer was hanged by vigilantes in January 1864, he claimed to have hidden more than $100,000 in stolen loot somewhere along the trail from Virginia City through Idaho.

In 1863, a man named Ed Long, along with a partner, stole almost $100,000 in gold dust and nuggets from a stagecoach in Portneuf Canyon in eastern Idaho. The stage, headed from the gold camps of Montana, was bound for Salt Lake City when it was waylaid between Pocatello and McCammon, Idaho. Though Long, who had formerly been a stage driver in the area, had spent the previous month attempting to learn about planned gold shipments, he and his partner were amazed to find so many gold-filled leather pouches in the stagecoach strongbox.

Knowing that a posse would be quickly in pursuit, the outlaws headed west towards the City of Rocks near the Idaho-Utah border. Planning to bury their cache and then blend in with many travelers along the trail. However, after burying the stolen gold, a Brigham City posse caught up with them at Birch Creek near the City of Rocks.  As the posse grew close, Long threw down his gun, trying to surrender. However, his partner opened fire and naturally, the posse fired back, killing Ed Long in the process.

After a long gunfight, Long’s wounded partner was finally captured and taken to a nearby stage station where his wounds were dressed. Though thoroughly questioned, he refused to divulge where they had hidden the stolen gold.

He was then transported to Utah, where it was found that he was a wanted man in Texas. Turning him over to the Texas authorities, the nameless man maintained his silence and there is no record of the treasure ever having been found. 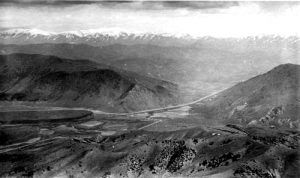 Two years later, the Portneuf Canyon Stage Robbery took place in nearly the same place as had Ed Long’s. Many believe that the gold taken from the robbery was also hidden in or near the City of Rocks. Valued at some $86,000 at the time, it would be worth more than $1.6 million today.

Though the transcontinental railroad was completed in 1869, stage and freight lines continued to run from the northern goldmines to the depot at Kelton, Utah, some 40 miles southeast of the City of Rocks.

In 1878, a stage bound for a U.S. military camp in Boise was robbed along the near Goose Creek, a few miles north of the City of Rocks. The treasure, valued between $90,000-200,000 at the time, was so heavy with gold bullion, it had to be dragged. A posse was soon on the trail following the tracks made by the laden strongbox, which led to the City of Rocks before disappearing. One of the outlaws was killed in the inevitable confrontation and the other was captured days later. Thought to have buried the cache at the base of what is now known as Treasure Rock, he later died in prison without ever having revealed the exact location of the stolen loot.

There are other records of a holdup that occurred near Oakley, Idaho that netted five outlaws about $100,000 in gold. Followed by a posse, they were trailed to a box canyon in the City of Rocks, where all five were killed in the ensuing gunfight. The stolen loot was never found.

Other tales abound of more stage robbery loot and even treasure from a couple of train robberies being hidden in the rocky crags and among the giant granite boulders of the City of Rocks.

Over the years, the Portneuf Canyon area became so notorious for its many hold-ups; it was variously described as Robber’s Roost and Hell’s Half Acre. The local lore of these many hidden treasures has been the discussion of many for well over a century and numerous accounts have been recorded of those who have attempted to retrieve the treasures over the years.

On one such occasion, a man named Leander Whittaker, a resident of Newton, Idaho, was approached by a stranger from Texas who claimed to have met Ed Long in a prison there. Whittaker was an old acquaintance of Long, having been the horse tender at the Woodland Stage Station when Long was a stage driver. The Texan asked Whittaker to help him find the hidden treasure which, he alleged Long had told him the location before he died. Though the pair spent many days in the City of Rocks looking for the hidden cache, they came away empty-handed. After returning to Newton, Whittaker found out the stranger was a wanted in Texas on seven counts of murder and was much relieved when he finally left the area.

Another man known as Glovemaker Jim who had been a Rocky Mountain Trapper since the 1830’s also tried to find the Ed Long cache. Spending the entire summer of 1873 looking for the stolen gold near the Twin Sister Boulders, he found nothing.

By the 1930s dozens of men had dug for the hidden treasures at the City of Rocks. However, if anyone ever discovered anything, they kept it a secret. 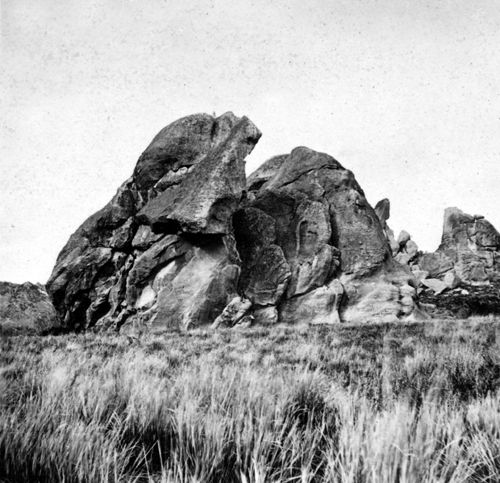 I enjoyed reading the articles about lost treasures. One I found most interesting was the massacre at Almo Creek near the City of Rocks. I disagree with the writer’s assessment that the story is fiction. My great Grandmother Wickel was a small child when her family came to the Almo area on Mormon Wagon trains in the 1800s. She often told me stories of when they arrived, they found what was left of a wagon train and dead settlers that had been massacred by Indians. The family and other settlers then buried the dead and began to homestead. My grandmother’s family built a cabin and turned the massacre site  into a pasture, swearing never to plow or try to farm that area. My grandmother told me that after the settlers built a small school, she had to step over grave mounds as she walked to school. My grandmother married a Ward and raised a family on Connor Creek, west of Elba, Idaho. Many Wards and Wickels still live in that area. – Dennis, Twin Falls, Idaho, June, 2008

Note:  This article is provided for entertainment purposes only. It is illegal to treasure hunt on National Park and Monument land. In fact, it is illegal to even have a metal detector in your vehicle. Legends of America does not condone the breaking of any federal or state laws, nor does it condone treasure hunting on any property without receiving the proper permissions.