“We encamped at the City of the Rocks, a noted place from the granite rocks rising abruptly out of the ground. They are in a romantic valley clustered together, which gives them the appearance of a city.”
– James Wilkins, one of the first wagon travelers through the area, 1849 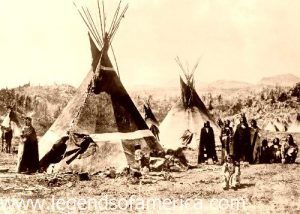 Nestled against the peaks of the Albion Mountain Range in Idaho, and spanning more than 14,000 acres is the City of Rocks National Reserve. The reserve provides numerous scenic views of spectacular granite spires, unusual sculptured rock formations, age-old forest stands, alpine meadows, and remnants of the California Trail.

Before the white man emigrated to the west, the area was called home primarily to the Shoshone and Bannock tribes who roamed the area hunting buffalo and gathering nuts.

The first non-Indians to see the area were Peter Skene Ogden and his Snake River band of beaver trappers in 1826. However, the trappers were disappointed when they found no beaver and the area was left to the Indians for the next 17 years.

Beginning in the early 1840s, a growing number of wagons began to pass through the area, guided by experienced mountain men such as Joseph B. Chiles and Joseph R. Walker. At this time, Granite Pass was actually part of Mexican territory and less than a mile from Oregon Territory.

Later wagon parties followed the trails themselves, without mountain guides. By 1843, the trail through the City of Rocks was officially known as the California Trail, and the site became a landmark for emigrants to mark their progress as they neared to their final destinations. 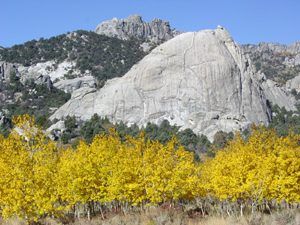 Stripe Rock at the City of Rocks, Idaho by the National Park Service.

By 1846, hardy travelers headed for Oregon’s Willamette Valley used this route as part of the Applegate Trail, and two years later, in 1848, the Mormon Battalion opened the trail from Granite Pass via emigrant Canyon to Salt Lake.

When gold was discovered at Sutter’s Creek in California, the trickle of emigrants became a flood as thousands of prospectors and families made their way to the Golden State in hopes of finding their fortunes. According to some statistics, over 70,000 emigrants used the California Trail in 1849 and 1850 alone.

Many of these early pioneers wrote their names in axle grease upon the rock faces, which can still be seen today on the northern edge of the Great Basin Desert. 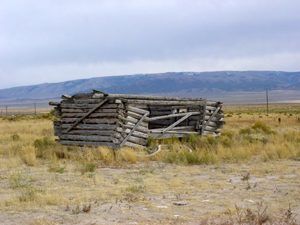 An outbuilding from an old homestead at the City of Rocks, Idaho by the National Park Service.

Later, numerous freight and stage routes ambled through the City of Rocks connecting Kelton, Utah and what would become Boise, Idaho.

After 1850 the area became part of Utah Territory, and in 1872 the Idaho-Utah boundary survey placed the City of Rocks in Idaho Territory.

With the completion of the transcontinental railroad in 1869, the overland wagon routes began to be used less often, with the exception of regional supply routes. John Halley’s stage route connected the railroad at Kelton, Utah with Idaho’s mining activities in Boise which supplied much of the early economic development of Idaho. A stage station was set up near the junction of the old California Trail and the Salt Lake Alternate.

In the late 19th century, homesteaders began to filter into the City of Rocks area, practicing dryland farming and ranching. Farming declined drastically during the drought years of the 1920s and 1930s, but ranching survived, continuing even yet today. 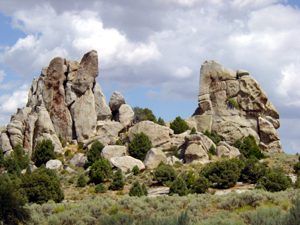 Devil’s Bedstead rock formation at the City of Rocks, Idaho by the National Park Service.

The area’s long history, coupled with beautiful scenery and recreational opportunities led to its designation as the City of Rocks National Reserve on November 18, 1988.

Today, recreational activities abound including hiking, wildlife viewing, camping, backpacking, cross country skiing, and horseback riding. The City of Rocks is also known to be one of the finest technical rock climbing sites anywhere in the world, with 100-300 foot spires providing the climbing opportunities.

The City of Rocks Visitor Center is located in Almo, Idaho and an all-weather route through Almo is open year-round. The road via Oakley is closed during winter months. The reserve is administered cooperatively by the National Park Service and the Idaho Department of Parks and Recreation.

Directions: The reserve is located 45 miles south of Burley, Idaho. From Boise and the west, take I-84 to Declo exit 216 and south to Idaho route 77 to Albion, Elba, and Almo. From Pocatello and Idaho Falls, take I-86 & I-84 to the Declo exit and then south to Almo. From Salt Lake City take I-15 north to Tremonton, then west on I-84 to Snowville and then routes 30 and 42, or continue north on I-84 to Sublette exit 245 and go west toward Malta, Elba, and Almo. 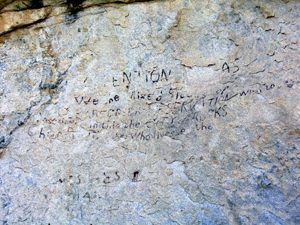 Inscriptions left by travelers along the California Trail by the National Park Service.