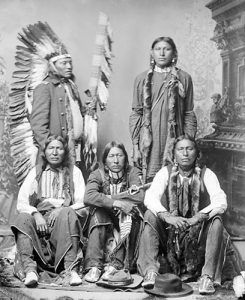 The Chickamauga were a band of Cherokee who supported the English cause in the American Revolution and separated from the main group of Cherokee, moving far down on the Tennessee River. There, under the leadership of Chief Dragging Canoe, they established 11 new settlements on Chickamauga Creek, in the neighborhood of the present Chattanooga, Tennessee. Wishing to gain distance from colonists’ encroachments, the Chickamauga soon became noted for their uncompromising and never-ceasing hostility against the American rebels. In 1782, their towns were destroyed by American Revolutionists, John Sevier, and Henry Campbell.

Here, they were continually recruited by Creek, Shawnee, and British soldiers, until they were estimated to number a thousand warriors. They raided as far as Indiana, Ohio, Kentucky, Georgia, and Virginia to fight for Cherokee lands. Following the death of Dragging Canoe in 1792, his hand-picked successor, John Watts, assumed control of the tribe and continued their hostility toward European-Americans. The Chickamauga/Lower Cherokee and the frontiersmen were continuously at war until 1794 when Chief John Watts signed the Treaty of Tellico Blockhouse in 1794, ending the “Cherokee Wars”.

Afterward, the Chickamauga warriors joined with the rest of the Cherokee who were removed from their homelands in the east along the Trail of Tears between 1836 and 1839 to Indian Territory (Oklahoma).

Cherokee – Westward on the Trail of Tears