Castle Gate, Utah, was once a busy coal-mining town located in Carbon County. It took its name from a nearby rock formation near the mouth of Price Canyon that has two sheer sandstone walls on either side of the Price River.

The first coal mine, Castle Gate Mine #1, opened in about 1886 after the Denver and Rio Grande Western Railroad constructed its line over the Wasatch Plateau from Springville. The mine was operated by the Pleasant Valley Coal Company, which was owned by the railroad. The coal mine soon became a major producer. 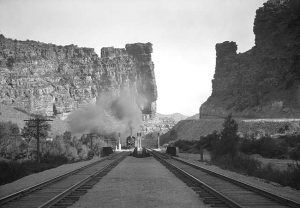 The town of Castle Gate was founded by the Denver and Rio Grande Western Railroad in 1888. Employees first lived in old boxcars provided by the railroad. In time, homes and buildings were built as more people came. The first school was taught in a private home, and in 1890, it was moved to the Mormon church.

The first coke ovens at Castle Gate were built in 1889 and immediately commissioned to produce coke for the Salt Lake smelters.

On April 21, 1897, the train from Salt Lake City coasted into Castle Gate, carrying the payroll for the Pleasant Valley Coal Company. As the baggage was unloaded from the train, three men, including the company paymaster, E.L. Carpenter, and two guards, gathered the payroll, consisting of three bags, estimated at $8,800, emerged from the Baggage Room and headed to the Company office some 75 yards away. 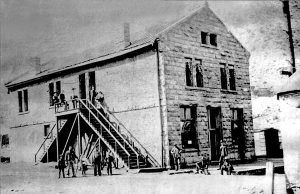 However, before they reached the office, a lone cowboy held the three at gunpoint, taking the largest bag from the paymaster. In the meantime, another man also approached, relieving them of another bag. Though 150 stunned miners looked on, only one man, a customer from a nearby store, attempted to interfere. However, he backed down when he was met with a gun.

In broad daylight, none other than the famous outlaws Butch Cassidy and Elza Lay made off with more than $8,000. The loot was never found. See the story HERE.

In the early 1900s, men earned 60 cents for every ton of coal removed from the mine. Working alongside their fathers, boys as young as six years old loaded the ore into coal cars, carefully removing any rocks.

By 1901, the Utah Fuel Company, also owned by the railroad, operated all of the former Pleasant Valley Coal Company mines, including Castle Gate. The Pleasant Valley Company then served as the retail outlet for the coal. 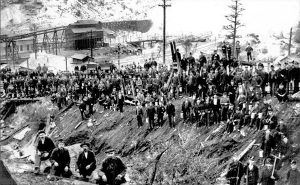 A large group of miners stood before the Castle Gate Mine in about 1900.

The Denver and Rio Grande Western Railroad actively recruited labor from Europe to work the mines from the outset. Soon, so many Italian immigrants were working at Castle Gate that the mine was soon dubbed the “Italian Mine.” The mining company segregated the ethnic groups to keep talks of strikes at bay. However, in November 1903, miners in Castle Gate and other mines in Carbon County went on strike. Most of the striking miners were Italian workers who partnered with the United Mine Workers of America in Castle Gate. The miners protested the dangerous working conditions of the Utah coal mines and sought better wages and hours.

The Utah Fuel Company strongly opposed unionization and restricted credit payments to the strikers and evicted them from their homes. The company successfully kept the mines from shutting down by recruiting local farmers to work in the mines. Fearful that the strike would lead to violence, the Utah government sent in the Utah National Guard.

A tent colony for the striking miners had been established between Helper and Castle Gate. In April 1904, the legendary labor organizer Mother Jones arrived in Utah, and her residency in the tent colony led to a confrontation between local law-enforcement officers and the strikers. On April 25, the sheriff and a 45-man posse entered the camp and arrested 120 Italians who were herded into boxcars and sent to a makeshift jail in Price. There, they waited until they received trials. In the end, eleven were found guilty of various offenses, and the rest were set free. 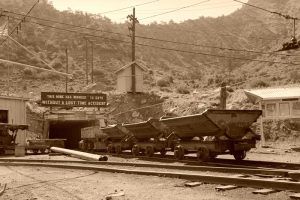 The United Mine Workers of America vowed to fund the Utah strikers until they had successfully unionized, but in the end, it was too much of a financial burden. The Union withdrew in the fall of 1904, leaving the striking miners without jobs or other support. Leaving bitter feelings with the strikers, it would be more than a decade before Utah miners would make another effort to unionize.

Castle Gate Mine #2 opened in 1912 in a side canyon east of Castle Gate on Willow Creek, about a mile to the northeast of Castle Gate. It was soon was found to have the finest coal in the region. The coal to the tipple traveled over a 5,300-foot long electric haulage tram pulled by an electric 15-ton General Electric mine locomotive to Castle Gate.

In 1914 the company town of Castle Gate was incorporated. The Utah Fuel Company owned the land, homes, and all of the businesses. All purchases by employees for goods and supplies had to be made at the company-owned Wasatch Store. In 1916, a new school was built for grades one through nine. The high school students traveled ten miles south to Price. Over time, Castle Gate also boasted a hospital, amusement hall, boarding house, saloon, two churches, a hotel, a meat market, confectionery, and a baseball field. 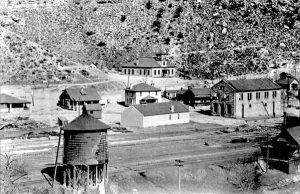 In 1918, the Denver & Rio Grande Railroad sold its stock in the Utah Fuel Company.

In 1922 Castle Gate No. 3 was opened. It was located between Castle Gate and the Bear Canyon Mine to the north and was the first vertical shaft coal mine in Utah.

On the morning of March 8, 1924, a crew of 171 miners entered the Castle Gate No. 2 Mine for the last time. Shortly after the start of the shift, an open flame ignited the coal dust and methane in the air, and an explosion tore through the mine. Two more explosions followed.

The force of the explosions was so powerful that heavy mining equipment, telephone poles, and coal cars were blown from the mine entrance across the canyon nearly a mile away. Inside the mine, rails were twisted, roof supports were destroyed, and the tunnels were caved in. 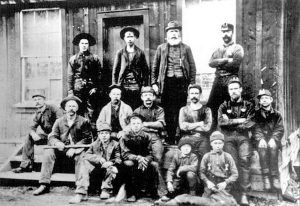 Scores of people came from the neighboring towns to render aid and offer support. One of these men, the leader of the rescue crew, died from carbon monoxide inhalation while attempting to reach the victims shortly after the explosion.

Recovery of the bodies took nine days, and identifying the bodies was a daunting task. The miners were terribly burned, and identification of some of the victims was only possible by their articles of clothing.

The amusement hall became a makeshift mortuary with rows of caskets awaiting funerals. The youngest victim was 15 years old, and the oldest was 73. The majority of miners killed were immigrants. Fifty-seven of the miners were single, 115 were married.  They left 417 dependents, including 241 children and 25  expectant mothers. Most miners were buried in the Price City Cemetery, but the final resting place for others was the Castle Gate Cemetery. 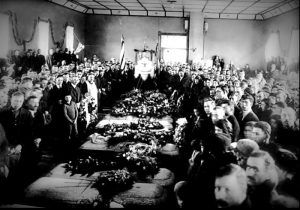 Caskets in Castle Gate, Utah, after the mining disaster of 1924.

In 1950 Kaiser Steel bought the Utah Fuel Company, and in November 1953, the Utah Power & Light Company began construction on a coal-fired electric generating plant at Castle Gate. Once opened, the $26 million plant employed about 100 full-time workers and produced enough electricity to serve the needs of over 300,000 people. 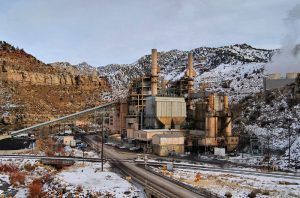 Afterward, the mine and its properties went through a series of owners, and by 1974 it was owned by McCulloch Oil, who decided the town was in the way of mining operations. The town was disincorporated in June 1974, and the company then began to dismantle the town. The homeowners were given the choice of taking the fair market value for their home, or the company would pay to move the home to another location. Sixty of the 72 homeowners chose to have their houses moved to the Castle Gate subdivision west of Helper.

The former townsite, including the company store and other business buildings, was razed and replaced with coal-loading facilities along the railroad line. 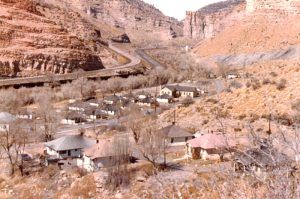 On July 31, 2000, at approximately 11:48 p.m., an explosion and fire rocked the Willow Creek Mine taking the lives of Shane Stansfield and Cory Jordon Nielson and sending eight other miners to the hospital. The explosion marked the end of a short and troubled life for the Willow Creek Mine. Afterward, it was sealed, and mining operations halted.

In 2015, the Castle Gate Power Plant was closed due to stricter environmental rules related to mercury. One of the oldest coal-fired power plants in Utah served the area for more than six decades. Over the next few years, it was torn down, and today there are no remains.

Today, the cemetery at Castle Gate is the only remnant of this once bustling mining town. Its many headstones tell much of the town’s history. Graves from many of those killed in the 1924 mine explosion can be found, as well as evidence of the infamous “flu epidemic of 1918,” which struck Castle Gate in 1919. The ethnic and religious diversity can be seen in the names of those buried here, including people from Scotland, Greece, Italy, Japan, and more. African-Americans, Mormons, Europeans, Asians, and Americans are buried here. There is a separate section for charity burials, Austrians, and even a Ku Klux Clan section. A monument sits at the cemetery that lists the names of the men who were killed in the mining disaster. The cemetery is 4.6 miles northeast of Helper. Head north on US-191 N/US-6 W for 3.3 miles and turn right onto US-191 N for 1.3 miles. The cemetery will be on the left.

Another monument to the Castle Gate Mine Disaster stands just off of Highway 6, about four miles north of Helper 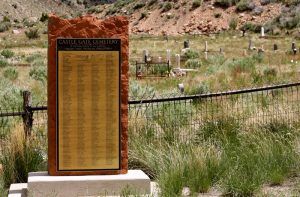