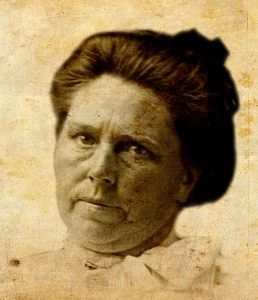 “Hell’s Belle” Gunness was America’s most degenerate female serial killer in history, Gunness likely killed both her husbands and all of her children. What is certain is that she murdered most of her boyfriends and her two daughters, Myrtle and Lucy. Between 1884 and 1908, the Norwegian immigrant is believed to have slain over 40 people in Chicago, Illinois and La Porte, Indiana, profiting from insurance claims and other scams, before disappearing without a trace.

Born Brynhild Paulsdatter Storseth on November 11, 1859, in Selbu, Norway, Brynhild was the youngest daughter of eight children born of stonemason, Paul Pedersen Størseth, and Berit Olsdatter. She was raised on a small farm in Innbygda, Norway and grew up to be a physically very strong woman, standing 5′ 9″ tall and weighing over 200 pounds.

One common, but unverified story, says that when she was about 18 years old she was pregnant and attended a country dance. While there, she was attacked by a man who kicked her in the abdomen, causing her to miscarry. The man, who came from a rich family, was never prosecuted by the Norwegian authorities. Afterward, the locals said that Brynhild’s personality drastically changed. A short time later, the man who had kicked her died of what was said to be stomach cancer.

She then went to work as a servant on a wealthy farm for the next several years. Then, in 1881, following the example of her sister, who had emigrated to America earlier, Brynhild moved to the United States where she assumed a more American-style name. She then made her way to Chicago, Illinois where she again worked as a servant for a time.

In 1884, Gunness married Mads Albert Sorenson in Chicago and two years later they opened a candy store that was not very successful. Not long afterward, their home and the store mysteriously burned down. The couple collected the insurance money and bought a new home. The pair had four children: Caroline, Axel, Myrtle, and Lucy. Caroline and Axel died as infants from acute colitis, the symptoms of which — nausea, fever, diarrhea, and lower abdominal pain and cramping — are also symptoms of many forms of poisoning. They collected on life insurance policies for both children.

On June 13, 1900, Gunness and her family were counted on the United States Census in Chicago, recording her as the mother of four children, of whom only two were living: Myrtle A. and Lucy B.. Also counted was an adopted 10-year-old girl, identified as Morgan Couch at the time, but who was apparently later known as Jennie Olsen.

On July 30, 1900, Albert Sorenson, on the one day his two life insurance policies overlapped, died. The first doctor to see him thought he had suffered from strychnine poisoning. However, the Sorensons’ family doctor had been treating him for an enlarged heart, and he concluded that death had been caused by heart failure. An autopsy was considered unnecessary because the death was not thought suspicious.

Though her husband’s family demanded an inquiry, claiming Belle had poisoned her husband to collect on the insurance, no charges were filed. In the end, she was awarded $8,500 (about $240,000 today), with which she bought a farm on the outskirts of La Porte, Indiana. It was reported that both the boat and carriage houses burned to the ground shortly after she acquired the property. 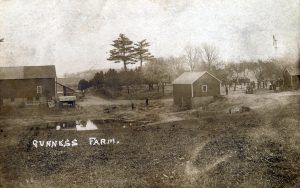 As she was preparing to move from Chicago to LaPorte, she became re-acquainted with a recent widower named Peter Gunness, who was also from Norway. Gunness, a butcher by profession, and Belle were married in LaPorte on April 1, 1902. Just one week after the ceremony, Peter’s infant daughter died of uncertain causes while alone in the house with Belle. In December 1902, Peter himself met with a “tragic accident.” According to Belle, he was struck on the head when a sausage-grinding machine had toppled off a high shelf in the kitchen. But, when the coroner looked at the body, he allegedly muttered: “this is a case of murder.” To make matter worse, one of Belle’s own children told a classmate that her mother had hit her husband over the head with a cleaver. Though the authorities investigated, the formidable Belle was so convincing that no charges were ever filed. A year later, Peter’s brother, Gust, took Peter’s older daughter, Swanhild, to Wisconsin. She was the only child to have survived to live with Belle.

Belle’s husband’s death netted her another $3,000 (about $81,000 today). Local people refused to believe that her husband could be so clumsy — he had run a hog farm on the property and was known to be an experienced butcher. The district coroner reviewed the case, unequivocally announced that he had been murdered, and convened a coroner’s jury to look into the matter. However, Gunness successfully convinced the investigators that she was innocent of any wrongdoing. At the time, Gunness did not mention that she was pregnant, despite the possibility that it might have inspired sympathy, and in May 1903 Gunness gave birth to a son she named Phillip.

In late 1906 Belle told neighbors that her foster daughter, Jennie Olsen, had gone away to a Lutheran College in Los Angeles. In fact, Jennie’s body would later be found buried on her adoptive mother’s property. 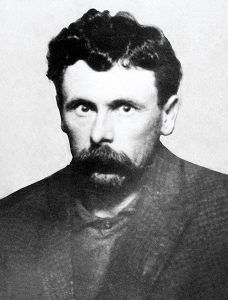 In 1907, she employed a farm hand, Ray Lamphere, to help with chores. However, word soon spread that her relationship with Lamphere was more than strictly professional. When drinking, Lamphere often boasted of sleeping with his employer, which came as a surprise to those who only saw Belle as the burly woman who liked to dress in men’s overalls and do her own hog butchering. But, there was another side to the woman that Lamphere saw, and soon the local folk would as well.

Lamphere would not be enough for Belle. She wanted something more and soon began to look for new suitors by inserting the following advertisement in the lovelorn column of newspapers in large midwestern cities:

Personal — Comely widow who owns a large farm in one of the finest districts in La Porte County, Indiana, desires to make the acquaintance of a gentleman equally well provided, with view of joining fortunes. No replies by letter considered unless sender is willing to follow answer with a personal visit. Triflers need not apply.

Several middle-aged men of means responded to Gunness’ ads and within no time, Belle was often seen going for carriage rides with strangers on Sunday afternoons. On those occasions, Belle was wearing the finest clothing and her hair was adorned in the latest style. Usually accompanied by a handsome man, she was unrecognizable from the rough farm woman the locals were used to seeing.

One of these men was John Moe, who arrived from Elbow Lake, Minnesota. He had brought more than $1,000 with him to pay off her mortgage, or so he told neighbors, to whom Gunness introduced him as her cousin. He disappeared from her farm within a week of his arrival.

Next came George Anderson from Tarkio, Missouri who said he would pay the mortgage off if they decided to wed. Late that night, while sleeping in the guest room, Anderson awoke startled to see Belle standing over him, peering into his eyes and holding a candle in her hand. He later stated that the expression on her face was so sinister and murderous, that he let out a loud yell and she immediately ran from the room without uttering a single word. Feeling terrified and uncomfortable, Anderson believed that Gunness intended to murder him. He quickly jumped out of bed and threw on his clothes. He fled the house without saying goodbye, and ran away, getting on the first rain headed to Missouri. He never returned for his belongings, nor did he ever speak to Gunness again.