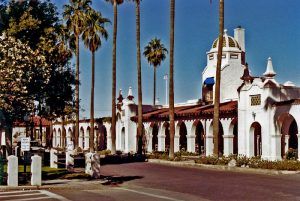 In the 1950s, after a young couple had just married in Ajo, Arizona, they headed north on their honeymoon to Lake Tahoe. However, they never made it. Soon, they entered an area lined with hills and rocks, known as the crater range. About midnight, their car slammed into a boulder, and both newlyweds were killed. Today, it is said that if you drive through this area after midnight, you can see their stranded vehicle, along with the honeymooners off to the side, trying to flag down help.

Days Inn – Reports of a tall ghost of a man have often been reported standing next to a bed in one of the rooms.

Monte Vista Hotel – Haunted by several ghosts, including a phantom bellboy that knocks on doors, then disappears, a female ghost has been seen walking the halls, a 1970’s bank robber who died in the lounge, and a long-ago resident of the hotel that can be heard clearing his throat and coughing. For the whole story of the Monte Vista Hotel, click HERE. 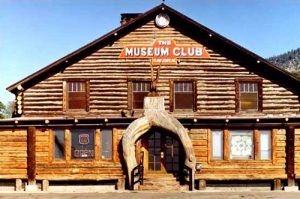 Museum Club – The voice of a woman thought to be the wife of a former owner talks to people after hours. She asked one musician, “are you done with that beer?” When he turned around, nobody was there. She’s also been seen in dark corner booths too. Occasionally customers will buy her a drink only to find she has vanished when they return. For the whole story of the Museum Club hauntings, click HERE.

NACOG Head Start Administration Building – The apparition of a woman has often been sighted in the halls, and strange phenomena continually happen in the building, including the sounds of disembodied voices. Other peculiar events include faucets that turn on and off by themselves, objects that are moved from one location to another, and mysteriously locked doors. Unfortunately, when staff takes their keys to unlock the doors, they no longer work, and the doorknob has to be replaced. Telephones ring to the front office from locked offices upstairs, even after they have been unplugged. Disembodied voices, apparitions, objects that would be moved from one location to another have also been reported.

Northern Arizona University – North Morton Hall – Many years ago, a girl killed herself in the dormitory just before Christmas break. According to reports, she apparently never left and is blamed for lights that go on and off of their own accord, smells, and has even been spotted occasionally. She also likes to pull the blankets off of people who stay on the floor she lived on and to “lock” girls in the bathroom. However, there is no lock on the bathroom door.

Readers Update: I was a student at NAU in 1988-89 and resided at the North Morton Hall. I had heard about a ghost there but didn’t think anything of it. It’s an old building with a lot of history and creepy spaces within the hallways. The laundry room was downstairs in the basement with the broiler. On one occasion, I took some reading down there while I did my laundry. I was the only one down there and was drying my clothes in the dryer. Suddenly, the door of the dryer flew open. It freaked me out, and I ran to get my roommate. She had to sit down there with me for the rest of the drying cycle. I still think about it even now. Dryer doors aren’t an easy thing to open on their own. And it just didn’t open a little bit… if flew wide open. I didn’t know anything in particular about the ghost until I read about it on the web. I guess “she,” thought I needed company. Sheri, October 2005 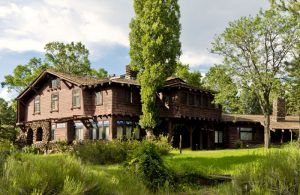 Riordan House State Park – The upstairs of the magnificent log mansion at the center of this small park is reportedly haunted by the ghosts of Caroline Riordan and her daughter Anna. Caroline’s ghost is seen dutifully caring for young Anna, who died of polio. Employees and visitors have seen the apparitions of both the mother and her ailing daughter. The house was built by the Riordan brothers, who made a fortune in the lumber industry but suffered from several family tragedies.

USGS Offices – Building 1 – Reportedly, the sounds of clapping hands are often heard, as well as doors that open and close seemingly by themselves and lights that tend to flicker constantly.

Hotel Weatherford – This historic hotel has been serving guests since its opening on New Year’s Day in 1900, with such visitors as newspaper tycoon William Randolph Hearst, former President Theodore Roosevelt, and lawman Wyatt Earp. Along with its rich history, a couple was reportedly murdered in the hotel in the 1930s. The staff has reported that one employee staying in the hotel awoke in the middle of the night to find a bride and groom sitting on the foot of the bed. In addition, another guest relayed that while taking an early morning stroll through the hotel, he spied the silhouette of a young woman darting from one side of the room to the other in the hotel’s ballroom. Other reports tell of low whispers and voices coming from the empty lounge. Hotel Weatherford, 23 N. Leroux St, Flagstaff, Arizona 86001, 928-779-1919. For the whole story of the Hotel Weatherford, click HERE! 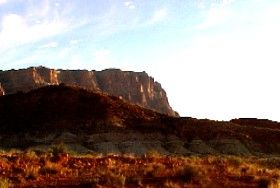 In a place called Launa’s Canyon about two or three miles southeast of Kingman, unearthly screams are reportedly heard in the middle of the night. During the mid-1950s, a man and his two daughters and his fiancé traveled out of Kingman in search of gold. Prepared to stay awhile, they soon built a new house in a deep narrow canyon. The future wife and her soon-to-be stepdaughters did not get along, and the fiancé decided to take matters into her own hands on the very night before her marriage. She murdered the children, hiding their bodies in the house, and then took off into the canyon.

Later, when she regained her sanity, she came back screaming and moaning through the canyon, begging forgiveness for what she had done. To this day, the legend says that her moans and cries can be between midnight and 3:00 a.m. 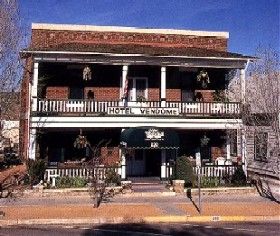 Hotel Vendome – The Hotel Vendome in Prescott is reportedly haunted by Abby Byr and her cat, Noble. At some point in the early 1900s, Abby came to Prescott in an attempt to heal herself of tuberculosis, then called “consumption.” She soon met and married a man, and the pair bought the hotel. After a time, they lost the hotel due to unpaid taxes. However, the generous new owners allowed the couple to stay at the hotel at no charge. Somewhere along the line, when her husband went out to get medicine, he never returned. The devastated Abby refused to eat or drink and died of starvation in Room 16 in 1921. After World War II, guests began to report seeing Abby, along with her cat, in the room where she died. Still waiting for her husband’s return, she is described as a benevolent ghost, friendly to those she encounters. 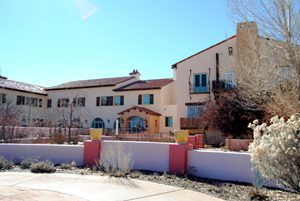 The La Posada Hotel – On May 15, 1930, the famous La Posada Harvey House Hotel opened its doors for business. The last one built in the famous Harvey Hotel and restaurant chain, Winslow, was chosen for the site, as it was the headquarters for the Santa Fe Railway. During those days, Winslow grew so fast that the railroad anticipated the town would soon become another Santa Fe, New Mexico. Designed by Mary Colter, the famed Grand Canyon architect, she paid careful detail to blend the aspects of the area’s Native American and Spanish cultures into the hotel. During the heydays of Route 66, the hotel garnered even more attention as thousands of travelers passed along this historic path. With the decline in rail travel, La Posada closed in 1957. Today, however, it has been restored and stands as an oasis in the desert.

With the many people and their varied stories, who have passed through these historic doors, is it haunted? We couldn’t dig up any information, but our reader, Diane, shared her experience.

I just got in from a road trip and “know” for a fact that we ran into lots of “spirits” at the La Posada in Winslow, Arizona. The manager agreed with us that he and his wife had seen one too. We had a dog that noticed it first, and that night, we had a glass move from the closet to the bathroom — it had my dang partial in it!! hehe… We noticed the dog staring at the closet the next morning too. This was in the Douglas Fairbanks room. Let me know if anyone else noticed it. I thought maybe no information was on the net due to “bad publicity,” but there is no doubt in my mind that something (unseen) was “around us” in that motel. – Diane, May 2007.