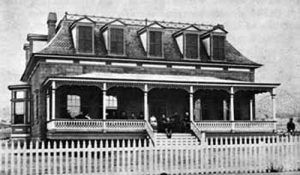 Prior to the closure of old Fort Grant (Fort Breckinridge), a site was chosen for a new fort by General George Crook. The “new” site was at a higher elevation. It was a more strategic location, situated at the foot of the southwestern slope of Mount Graham in what is now Graham County in southeast Arizona. Founded along a route that was often used by Apache fleeing to Mexico from the San Carlos Reservation, the fort’s purpose was to stop the marauding bands of Apache Indians in western New Mexico and southeast Arizona. 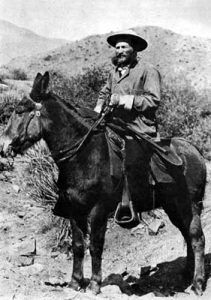 In January 1873, eleven companies of cavalry and infantry were transferred to Fort Grant, under the command of Major Brown. The troops immediately began to establish additional buildings, including officers’ quarters and a commissary building, and constructed a wagon road up the side of Mount Graham. The soldiers were tasked with intercepting the Indians escaping from the San Carlos Reservation and pursuing raiding parties along the international boundary. The troops played a prominent role in the Apache Wars of the 1880s.

Following the Battle of Cibecue on August 30, 1881, three White Mountain scouts — Dead Shot, Dandy Jim, and Skitashe, were court-martialed for their part in the mutiny. The three scouts were hanged on a specially constructed gallows on the parade ground on March 3, 1882, as scores of civilians from the surrounding countryside looked on. The Cibecue affair touched off a general outbreak that saw Chiricahua and Warm Springs Apache such as Naiche, Juh, and Geronimo bolt the reservation and plunge Arizona, New Mexico, and northern Mexico into years of turmoil. The campaign against the Apaches would continue until it finally ended with Geronimo’s surrender in August of 1886.

In 1888, Buffalo Soldiers of the 10th Cavalry were stationed at Fort Grant who often participated in civil duties, such as chasing train robbers and other outlaws. One high-profile case was the infamous Wham Paymaster Robbery which occurred on May 11, 1889. After U.S. Army Paymaster Major Joseph W. Wham had paid the soldiers’ salaries at Fort Grant, he, along with an escort of eleven Buffalo Soldiers, was making his way to Fort Thomas when they were ambushed 18 miles from their destination. The soldiers soon found themselves in a lengthy gun battle with the robbers, resulting in eight wounded. The bandits, in the meantime, made off with $28,000 in gold and silver coins.

The troops were withdrawn from Fort Grant in 1898, and the site was empty, but for a caretaker by the name of Colonel William F. Stewart in the Artillery Corps. However, two years later, in 1900, the post became a staging point for numerous soldiers on their way to the Philippines to fight in the Spanish-American War.

In October 1905, Captain Jenkins marched Troop D across the parade grounds of Fort Grant for the last time. The soldiers were then transferred to Fort Huachuca and the post was once again abandoned except for a caretaker.

After Arizona became a state on February 14, 1912, the government turned over the site to the State of Arizona to use the Arizona State Industrial School for wayward boys and girls. The school quickly began to modernize the buildings for new purposes.

In 1968, the school officially became part of the Arizona State Department of Corrections and in 1973, became an adult male prison. In 1997 the prison became a unit of an Arizona State Prison complex headquartered in Safford, Arizona.

Over the years, extensive construction programs have destroyed many of the historic buildings, but several of the original adobe officers’ quarters are still utilized today. The prison is located on Arizona State Road 266 about 36 miles southwest of Safford, Arizona.