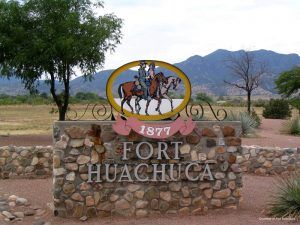 A product of the Indian Wars of the 1870s and 1880s, Fort Huachuca, Arizona, was established in March 1877 at the base of the Huachuca Mountains. The name “Huachuca” comes from an obscure local American Indian language that, when loosely translated, describes a “place of thunder.”

The fort was one of a chain of forts established to guard southern Arizona against the Chiricahua Apache, led by Geronimo. The troops also worked to block the traditional Apache escape routes through the San Pedro and Santa Cruz Valleys to Mexico.

A temporary camp was established at the post’s current location on March 3, 1877, by Captain Samuel Marmaduke Whitside with two companies of the 6th Cavalry. The site was selected because it had fresh, running water, an abundance of trees, excellent observation in three directions, and protective high ground essential for security against Apache tactical methods. Several years later, in 1882, it was designated as a fort.

In 1886, General Nelson A. Miles designated Fort Huachuca as his advance headquarters and supply base for the Geronimo Campaign. Geronimo’s surrender in August 1886 practically ended the Apache danger in southern Arizona. The Army closed more than 50 camps and forts in the territory, but Fort Huachuca was retained because of continuing border troubles involving renegade American Indians, Mexican bandits, American outlaws, and freebooters.

In 1913, the 10th Cavalry “Buffalo Soldiers,” one of the Army’s elite black cavalry corps, arrived and remained almost 20 years. The 10th Cavalry joined General John J. Pershing in the 1916 expedition into Mexico, and, during World War I, it was assigned the mission of guarding the United States-Mexico border.

By 1933, the 25th Infantry Regiment had replaced the 10th Cavalry as the primary combat unit for the fort. The 25th, in turn, was absorbed by the 93rd Infantry Division during World War II. When the 93rd departed for the Pacific in 1943, the 92nd Infantry Division arrived at the fort for training and subsequent assignment to the European Theater. During the war years, the troop strength reached 30,000 men at the fort, which in the 1930s had been described as suitable for a brigade-sized unit of about 10,000 men. 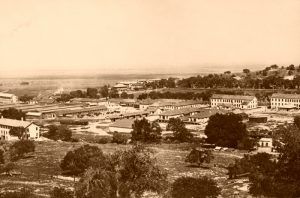 At war’s end, the fort was declared surplus and transferred to the state of Arizona. It was reactivated during the Korean War by the Army Engineers.

A new era began in 1954 when control passed to the chief signal officer, who found the area and climate ideal for testing electronic and communications equipment. The fort’s importance in the national defense picture grew steadily from that moment. In 1967, Fort Huachuca became the U.S. Army Strategic Communications Command headquarters.

Then, in 1971, the post became the U.S. Army Intelligence Center and School’s home, bringing with it the School Brigade. 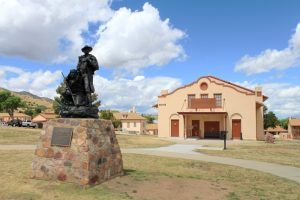 Today, Fort Huachuca is the primary military installation in Arizona and one of prominence throughout the Southwest. The active Army post covers more than 70,000 acres, 110 of which are the “Old Post Area.” The original Fort Huachuca cantonment was declared a National Historic Landmark in March 1977. A rustic wooden sign sits on the northeast corner of Brown Parade Field, the center of post-life during the days of horse soldiers. Surrounding buildings and homes are maintained with the appearance and flavor of the old days. Among its historic buildings is the Pershing House, an adobe structure built in 1884, traditionally the Post Commander’s quarters; the “Old Post” Barracks, built in 1882-1883; Leonard Wood Hall, a large two-storied building used as the hospital; and the Fort Huachuca Historical Museum, an adobe and stone building initially used as the post chapel.

The fascinating history of the U.S. Army in the Southwest and the history of the Southwest itself unfolds at the Fort Huachuca Historical Museum. Opened in 1960, the museum has grown rapidly and now houses one of the most representative collections in the state. The exhibits are instructive and entertaining, and some of the U.S. Army manuscripts and documents, dating back as far as 1861, tells viewers a great deal about the way of life on a rugged frontier. The museum, in Building 41401, is open to the public without charge. A museum annex across the street from the Fort Huachuca Historical Museum displays more artifacts.

The fort is located about three miles west of Sierra Vista, Arizona, on Arizona Highway 90. The Fort Huachuca Museum is located three miles northwest of the fort’s main gate at Boyd and Grierson Aves. 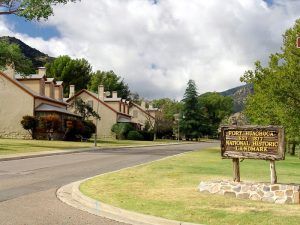