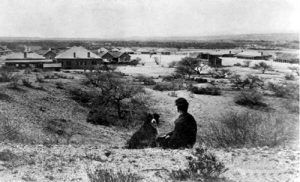 After Fort Goodwin, Arizona, was closed, the Gila Valley was still in need of protection, and a new post on the Gila River was established in the summer of 1876, about six miles east of old Fort Goodwin. The post was initially named Camp Thomas in honor of Adjutant General Lorenzo Thomas, who had died in 1875. Two years after it was built, the post was moved to the present-day townsite of Fort Thomas. At its peak, 27 buildings were situated at the fort, all constructed of adobe by the soldiers. Like its predecessor, Fort Goodwin, Fort Thomas was also afflicted with malaria outbreaks throughout its existence. The post was re-designated as a fort in 1882 and became the regimental headquarters for the 3rd U.S. Cavalry that same year.

Following the Battle of Cibecue on August 30, 1881, right up until the final surrender of Geronimo in 1886, Fort Thomas was an active military post. However, with the Apache Wars over, the troops were gradually moved to other posts, and the fort began to decline. It was over to the Department of the Interior in the spring of 1891.

The town that grew up around the fort, which took its name, had a poor reputation in its earliest days – filled with brothels and saloons. The small, unincorporated community continues to be populated today, but there are no remains of the fort.

The site of the first Camp Thomas is marked with a bronze plaque reading “Geronimo.” On the north side of U.S. Highway 70, between the abandoned village of Geronimo and the present-day town of Fort Thomas. The site of the second Fort Thomas is about one mile west along U.S. Highway 70 across the highway from the Fort Thomas high school. There are no visible remains except for a few stones with mortar between them on a low hillside to the southeast of the original site.