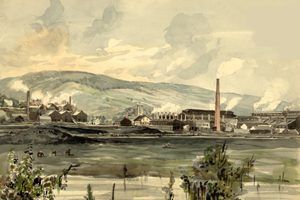 The Middle Atlantic region was settled by a wider range of people than New England. Dutch immigrants moved into the lower Hudson River Valley in what is now New York State. Swedes went to Delaware. English Catholics founded Maryland, and an English Protestant sect, the Friends (Quakers), settled Pennsylvania. In time, all these settlements fell under English control, but the region continued to be a magnet for people of diverse nationalities.

Early settlers were mostly farmers and traders, and the region served as a bridge between North and South. Philadelphia, in Pennsylvania, midway between the northern and southern colonies, was home to the Continental Congress, the convention of delegates from the original colonies that organized the American Revolution. The same city was the birthplace of the Declaration of Independence in 1776 and the U.S. Constitution in 1787. 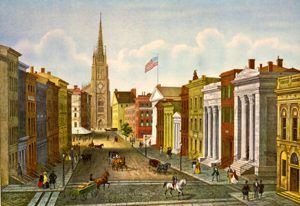 As heavy industry spread throughout the region, rivers such as the Hudson and Delaware were transformed into vital shipping lanes. Cities on waterways — New York on the Hudson, Philadelphia on the Delaware River, Baltimore on the Chesapeake Bay — grew dramatically. New York is still the nation’s largest city, its financial hub, and its cultural center.

Like New England, the Middle Atlantic region has seen much of its heavy industry relocate elsewhere. Other industries, such as drug manufacturing and communications, have taken up the slack.

Including the states of New York, New Jersey, Pennsylvania, Delaware, Maryland, Washington D.C., Virginia, and West Virginia, this region has a varied geography with a broad, flat coastal plain lining the Atlantic and Gulf shores from the Texas-Mexico border to New York City. It was in this region that much of American Revolution was fought and the Declaration of Independence signed in Philadelphia on July 4, 1776. The Nation’s capitol, Washington D.C. is located here along the Potomac River. With numerous industrial areas, this region attracted millions of European immigrants and gave rise to some of the East Coast’s largest cities: New York, Baltimore, and Philadelphia. The climate in the northwest is humid with cool summers in the northernmost areas. Snow falls during the winter as the temperatures are regularly below freezing. Major geographical of the region include the Appalachian Mountains, Atlantic Ocean, Great Lakes the and border with Canada to the north.

Frederick Jackson Turner wrote in 1893 about the important role the Mid-Atlantic or “Middle region” had played in the formation of the national American culture, and defined it as “the typical American region”. 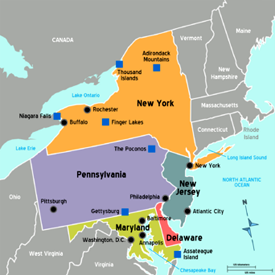 The Middle region, entered by New York harbor, was an open door to all Europe. The tide-water part of the South represented typical Englishmen, modified by a warm climate and servile labor, and living in baronial fashion on great plantations; New England stood for a special English movement– Puritanism. The Middle region was less English than the other sections. It had a wide mixture of nationalities, a varied society, the mixed town and county system of local government, a varied economic life, many religious sects. In short, it was a region mediating between New England and the South, and the East and the West. It represented that composite nationality which the contemporary United States exhibits, that juxtaposition of non-English groups, occupying a valley or a little settlement, and presenting reflections of the map of Europe in their variety. It was democratic and non-sectional, if not national; “easy, tolerant, and contented;” rooted strongly in material prosperity. It was typical of the modern United States. It was least sectional, not only because it lay between North and South, but also because with no barriers to shut out its frontiers from its settled region, and with a system of connecting waterways, the Middle region mediated between East and West as well as between North and South. Thus it became the typically American region. Even the New Englander, who was shut out from the frontier by the Middle region, tarrying in New York or Pennsylvania on his westward march, lost the acuteness of his sectionalism on the way.