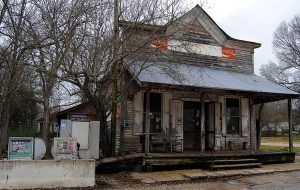 The Gibbes Store in Learned, Mississippi began operations in 1899. Though the clientele and the merchandise has changed, stepping into this place is an adventure into the past. Photo by Kathy Weiser Alexander.

“There are more ducks killed around the stoves on the dry goods boxes at the customary haunts of local nimrods every evening between seven and nine-thirty o’clock, than are slain in twenty-four hours along the Illinois River from source to mouth. Unless the legislature puts some restriction on this method of wholesale slaughter, the time will soon come when there won’t be any duck-shooting stories to tell — that anybody will put any confidence in.”

— Correspondent in news notes to the Carrollton Patriot

Out of necessity, country stores, or general stores, got their start during the colonial period for the many pioneers who lived outside urban markets. Many owners of these mercantiles began as roving peddlers and once they had accumulated enough capital and inventory, they often established permanent locations in settlements where there was a need and likely profit. Others; however, would specifically move too quickly growing areas or crossroads, knowing that they would be successful. This was particularly true in boomtowns, such as mining camps or railroad towns. In many cases, the “peddler” and his “store” would move along to the next booming community if, and when, the boomtown and its profits declined. In many instances, the country store would be the first business in a new settlement, and sometimes, the town itself would take its name from the store itself. This was not necessarily because the area residents wanted it that way; but, when the number of area residents grew large enough, the post office was generally located in the General Store. And who was the potential postmaster that requested a post office and name? — The proprietor of that very same establishment. Sometimes, the owner was also the town clerk, served as Justice of the Peace, or even an undertaker. 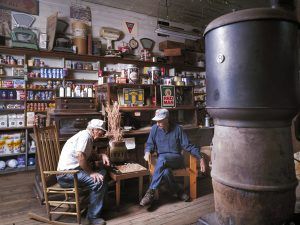 In addition to often being the only provider of “store-bought goods” and the post office, the country store served other roles, including the social center of the community, as an “exchange bank”, community message center, and political club and forum for men in the community. Somewhere in the store, on a door or a wall, one might find every type of notice. These might include local events, elections, auctions, and “wanted posters” for outlaws.

While every store was different, there were similarities among many, including a front that was decorated by tin sign advertising, representing tobacco, cigars, soft drinks, hardware, and more. Usually, the store featured double doors that opened inward, and windows that were filled with notions, jewelry, and other women’s items to entice them in. For the men, displays might show tools and boots.

When visitors entered the store, they were met with dim light, long counters, rounded glass showcases, and side walls lined with shelves, drawers, and bins. Other items such as buggy whips, horse harnesses, lanterns, pails, ropes and more hanged from the ceiling. Produce, nuts, beans, and nails were stored in bins, usually on the floor or against a wall. Shelves not only contained foot stuffs, but, also fabric and sewing notions, household items, soaps, medicines, spices, crockery and dishes, cartridges and shells, and small farm implements. Generally, there were no side windows, contributing to the dark interior. The post office, if there was one, was tucked into a corner, or the rear of the store.

Sitting on the countertops, shoppers might find merchandise that included stacks of overalls, denim and khaki pants, candy jars, tobacco, and all manner of other products. Also sitting on the counter, one would usually see the cash register, a coffee mill, scales for weighing grocery items and nails, and a wrapping paper unit with string attachment. Virtually, the countertops would be filled with merchandise, leaving only enough room for purchases, and wrapping of the items.

Between floor to ceiling shelves that lined the walls, and the multitude of items sitting atop and below the counters, visitors would find a pot-bellied stove surrounded by a couple of chairs, a coal bucket, the ever-present spittoon, and yes, a checkerboard sitting atop an empty nail keg. Elsewhere, in the narrow passageway that was the middle of the store, could be found barrels that might contain any number of items — from pickles, to crackers, potatoes, mincemeat, and more candies. 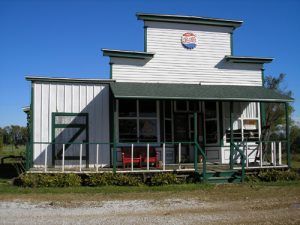 This old general store in Red Oak,  Missouri displays the typical white paint and a false front which was often seen in these old country stores, photo by Kathy Weiser.

The store was usually a two-story frame building, painted white, and fronted by a raised porch for convenient loading and unloading. During warm weather, the porch also served as the social center as men gathered on a provided bench, chairs, or the steps, to talk about weather, politics, the price of crops, and more. The upper floor was often only attic space, which served for supply storage. In cases, where the second floor was a full floor, it often served as the proprietor ‘s home. Reserve stock, fertilizer, livestock feed and other heavy bulk items were stored in an extension at the side or rear.

For rural families, a weekly trip to the General Store was a social event come Saturday. With the kids sitting in the back of the wagon, along with chickens, cream, eggs, and pelts to be traded, Mom would pack a basket lunch and feed for the horses, and make a day of the outing. Store-bought items were “luxuries” for most farm families, and were rarely purchased except for need, and maybe something special for Christmas. Entering the store with anticipation, they were met with the distinct aroma familiar in many country stores — a blend of ripe cheese, pickles, kerosene, produce, feed, cured meats, leather, and tobacco smoke.

Everyone looked around, perhaps picking out something they hoped for as a Christmas gift. With eager smiles, the children pressed against the candy displays, featuring peppermint sticks, licorice, jelly beans, horehound and rock candy, lemon drops, and maybe some chocolate. 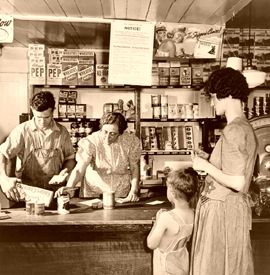 Boys looked longingly at Barlow knives, Stevens single-shot rifles, Jew’s harps, and harmonicas, while the girls wished and hoped for china dolls, “store-bought” dresses, glass beads, and pretty ribbons. Mom and Dad were more practical, perhaps sending wistful glances to new tools and glassware; but, in the end, they would leave with only what they needed. This might include basic staples such as flour, salt, and coffee; some nails, chicken feed, a needle, and thread, and if the kids were very lucky, one piece of penny candy each. Rather than placing their articles in a bag, the clerk would wrap it all up in brown paper, tied up with twine.

Stocking of early stores required that the proprietor make trips to wholesale and auction houses, most of which were located in the northeast. Later, a growing number of traveling salesmen called “drummers” began to peddle their wholesale wares to store owners. With the expansion of the railroad, buying trips became much more convenient and ordered wholesale goods could be sent by rail. To the townsfolk, the arrival of fresh merchandise became yet another social event, especially during the holidays when a merchant might stock items not seen during the rest of the year, such as crates of oranges, boxes of figs, and English walnuts.

In the South, the country store assumed a different significance after the Civil War. Many stores were the outgrowth of the plantation system. When plantation owners owned slaves, the often had a commissary from which, food and clothing were distributed to the slaves.

When the Civil War was over, the newly freed slaves often became sharecroppers or tenant farmers, and of course, had to pay for what they need. The commissary might then become a “general store” which provided supplies on seasonal credit, often at exorbitant rates of interest. Collateral for the credit was a crop lien where the merchant had a legal claim to future profits from harvests. During this time, the number of stores grew tremendously.