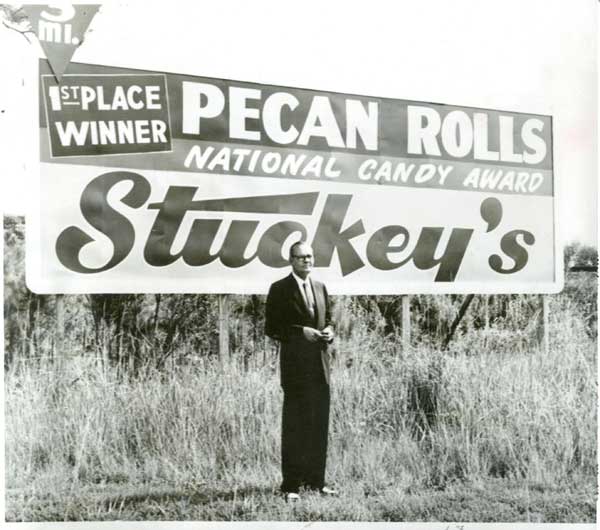 W.S. Stuckey in front of a Billboard advertising Pecan Rolls.

When remembering the good ole days of Route 66, do you have memories of your family stopping at Stuckey’s to browse through their pecan log rolls, pralines, and peanut brittle?

In those long-ago days of Burma-Shave signs and the static of rock and roll on the AM radio, it seemed that the high-pitched roofs of Stuckey’s were simply everywhere. But what happened?  Where are they now? While you still see a few of them here and there, its certainly not like it used to be when we were kids.

Stuckey’s, like Burma-Shave and so many other icons of the past, eventually got lost in the corporate jungle, where small things are not so important as profits. But, it was not always so, and it’s not so again today. 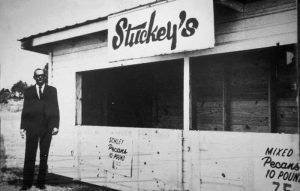 Stuckey’s began in the early thirties when a man named W.S. Stuckey, Sr. began selling pecans. During these times of the great depression, Stuckey had dropped out of college due to finances and was working on his family farm, a job he hated.  He was looking for a side hustle to make extra money – and escape a life of cotton farming. A local warehouseman suggested he start buying pecans and selling them to the warehouse. In no time, with a $35 loan from his grandmother and a Model A Ford converted into a truck, Stuckey began traveling from house to house buying pecans.

Sometimes he would spend all his cash too early in the day so he would wait until the bank closed and start writing checks. He would then sell the pecans that night and deposit the checks the next morning before the checks had cleared. 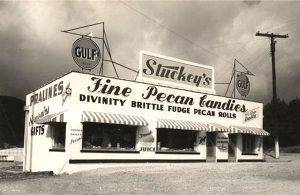 It was a great idea for the unemployed Stuckey who sold about $4,500 worth of pecans in his first year. By 1933 he was doing well enough that a banker lent him $200 to expand his business. Three years later, the bank had extended his credit line to $20,000 and Stuckey’s pecan sales reached $150,000.

In 1937, Stuckey, along with his wife, Ethel, decided to take advantage of the winter tourist season by setting up a roadside stand. In addition to selling shelled and unshelled pecans, Ethel made batches of pecan candy that were also sold at the stand. For two years, their sales totaled $2,000 to $3,000. They sold the roadside stand and opened their first retail store in Eastman, Georgia. Before long, two more stores were built in Georgia, and in 1941, a new one was opened in Hilliard, Florida.

When gas and tire rationing began in World War II, Stuckey was forced to close one of his stores and another fell victim to moonshiners who robbed the store for its sugar and burned it. Only the store in Eastman remained. However, by this time his pecan treats had become so well known, that the couple was commissioned to produce candy for the military.

In 1948, they started large-scale candy production in a warehouse behind the Eastman store. By that time people were traveling again and they began to aggressively set up more stores. By 1953, the number of stores was 29, and a little more than a decade later, in 1964, it had jumped to over 100.  It was in this year that Stuckey’s merged with Pet, Inc. with W.S. Stuckey serving as President of Stuckey’s Inc. However, in 1969, the CEO of PET, Theodore Gamble, died unexpectedly of a heart attack.  The new leadership of PET was not as supportive of the Stuckey’s brand, and W.S. took early retirement in 1970.  He died on January 6, 1977, largely disappointed by the way PET had begun to neglect the roadside chain that bore his name. 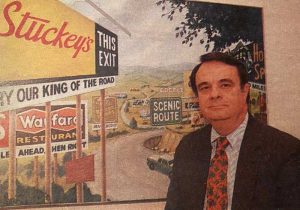 With the loss of its visionary founder, coupled with the Arab oil embargo and reduction in road travel, the Stuckey’s stores began to falter. In 1979 Pet was acquired in a hostile takeover by IC Industries and the Stuckey’s brand sadly continued to decline. IC Industries began to sell Stuckey’s stores for their real estate value and those that were not sold were closed. Within a matter of years, what had taken W.S. Stuckey a lifetime to build was largely lost.

Of this, Bill Stuckey, Jr. would later say: “Instead of marketing what worked, Pet wanted to look good on Wall Street and let the company-owned stores go to hell in order to keep the bottom line up.”  PET officials retorted, saying that the problem was “a changing world that included McDonald’s, Hardee’s, Shoney’s, and gas stations that sold food and novelties.”

Fortunately, on May 1, 1985, Billy Stuckey, son of the founder, purchased the remaining assets of Stuckey’s from IC Industries after a year of negotiations.  This included the trademark, the franchise system, and the few remaining company-owned stores. 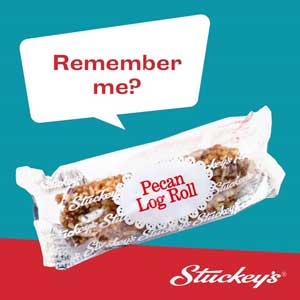 Stuckey’s fit well within Billy’s business portfolio, as he had been successfully running Interstate Dairy Queen Corporation (“IDQC”), a company he founded in 1977, and had the franchise rights to all of the famous soft ice cream stores within a half-mile radius of the interstate highway system.  He built upon this expertise to align Stuckey’s locations with his Dairy Queen Stores and launched a Stuckey’s Express franchise program, a store-within-a-store concept that complemented existing c-store and travel-stop operators’ businesses.

Stuckey’s continued to be managed by Billy until 2014 when he sold IDQC to Warren Buffet / Berkshire Hathaway, owner of American Dairy Queen.  Largely retired after that point, the company was left being run by a skeleton crew with Billy remaining as an advisor. It had not seen a profit for over three years when in November of 2019, Ethel “Stephanie” Stuckey, Billy’s daughter, purchased the company and became CEO of Stuckey’s Corporation. Since taking over, Stephanie has made the company profitable by developing more retail and online sales channels, creating a line of branded merchandise, and acquiring a pecan shelling/candy manufacturing plant. 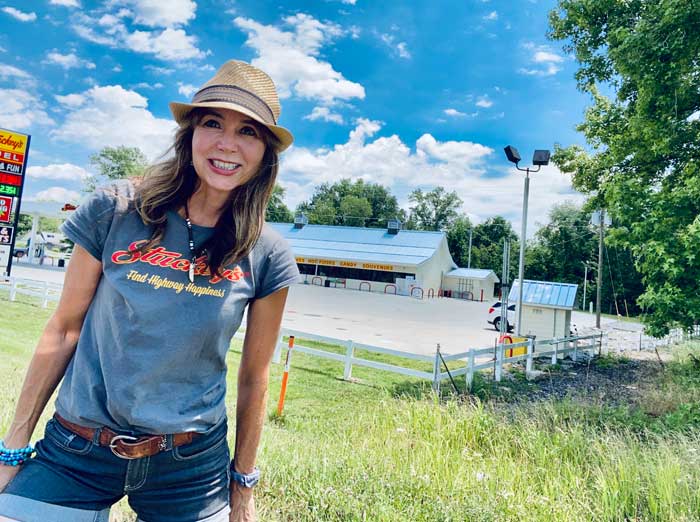 Stuckey’s is unique in that – unlike many other nostalgic food brands that made America great and were sold to large corporations – the family got the company back and is in the process of reviving it. 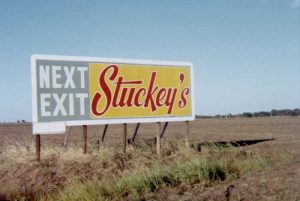