Heading westward on Route 66 beyond the ghost towns of Two Guns and Canyon Diablo, Arizona, travelers will soon come to the old site of the Twin Arrows Trading Post before passing by Padre Canyon, and NO, you can’t forget Winona. 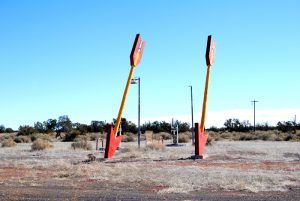 For years, billboards lined old Route 66 advertising the Twin Arrows Trading Post at exit 219. Today, however, this once vibrant Route 66 icon sits abandoned in the Arizona desert just next to I-40, with concrete barriers blocking access and large semi-trucks rushing by, close enough to make your hair fly.

Though the specific date it was established remains unknown, it was built sometime after 1946, as it was not mentioned in Jack Rittenhouse’s A Guide Book to Highway 66. It was called the Padre Canyon Trading Post, named for the nearby Padre Canyon Gorge when it first opened. It appears to have gained little notice until 1955 when it was taken over by the Troxell Family, who placed two very tall wooden arrows complete with tips and feathers in the parking lot and renamed it the Twin Arrows Trading Post. Over the years, a Valentine Diner and a gas station with above-ground tanks are still visible today. 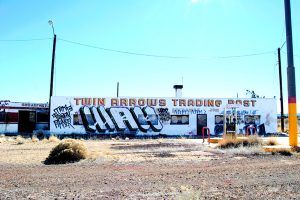 Unfortunately, like with many Route 66 businesses, the interstate construction through the area in the 1970s spelled impending doom for the once-popular tourist site. Despite having Exit 219 designated in its name, the business soon began to fail. It reportedly changed hands several times, reopening for the last time in 1995. After operating for some 60 years, it finally closed down for good in 1998. In the end, the property was relinquished to the state.

Today, the land continues to be owned by the State of Arizona, but the Hopi tribe owns the buildings and its famous arrows. For years, the buildings have sat vacant in hot, dry Arizona, with both the weather and the vandals taking their toll on this Route 66 Icon. 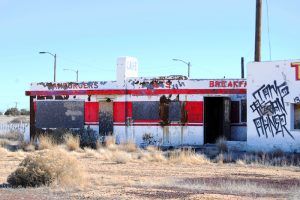 The Hopi Tribe, owners of the property, has made plans to restore the site, but though these hopes have been in the works for years, no improvements have been made to the buildings, though the iconic arrows appear to be maintained. The windows and doors of the old Valentine Diner, gift shop, and gas station are boarded up and covered by graffiti.

The State of Arizona, owners of the land, have placed Jersey barriers around the property, blocking access for various reasons. Please use care when walking along the blockades as trucks pass in front of the property at a high rate of speed.

Nearby sits the Twin Arrows Navajo Casino Resort on the north side of I-40. 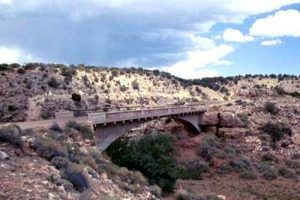 From Twin Arrows, the oldest alignment of Route 66 once traveled northwest of today’s I-40, crossing Padre Canyon, which dramatically breaks the relatively flat plains of the high desert. Pre-dating Route 66, the 1914 Padre Canyon Bridge, on the old Flagstaff-Winslow highway, was one of the most dangerous on the Mother Road.

Several serious accidents occurred here as drivers required six hazardous approach curves descending into the canyon before crossing the narrow bridge and climbing out the other side. But, at the time, it was the only way for the many depression-era travelers, and later, tourists taking vacations, to make their way westward. Recognizing the traffic volume and the dangerous aspects of the road, Route 66 was realigned with a new bridge in 1937 in the same place that it is today. This bridge, too, was replaced when I-40 came through, but its old foundations can still be seen under the westbound lanes of I-40.

Today, the old Padre Canyon Bridge is listed on the National Register of Historic Places. Though a little worse for wear, the architecture speaks of another era when model-T’s were the norm.  Though the bridge is just about one mile northwest of the Twin Arrows exit, it cannot be seen from the interstate because of its depth in the canyon. Located on private property, permission should be obtained to access the bridge from the east. Lacking permission, the bridge can also be seen by approaching it from Winona on the old Forest Service Road. The bridge and canyon are approximately eight miles on rough roads. A high clearance vehicle is recommended.

The activities of the Native Tribes are documented in the rock carvings found along the walls of Padre Canyon.

Finally, in the words of Bobby Troup, “don’t forget Winona.” Initially, the place was called Walnut, predating its occupation in 1912. The town began when Billy Adams was making his way on a bicycle from Moody, Texas, to Long Beach, California, to visit his brother in the early 1900s. 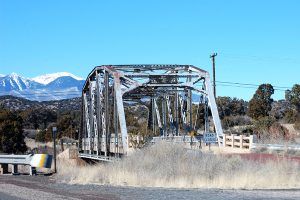 However, before he reached California, he came upon a spot, about 13 miles east of Flagstaff, which would become Winona. He liked the place, and traveling on to Flagstaff, he boarded a train and returned to Texas. He married a girl named Myrtle, and they soon returned to that “perfect spot,” building a trading post that exchanged supplies and groceries with the Navajo and Hopi Indians for blankets, jewelry, and other native crafts.

Though Route 66 was not yet established, by the 1920’s Model-T’s were making their way westward on the Flagstaff-Winslow Highway, passing right by the Adams’ trading post. Seeing the opportunity, they soon established one of the first tourist camps in Arizona in 1920. Billy built 12 one-room cabins and overnight camping for those who couldn’t afford the $1 per night cabin fee.

Billy’s skilled trade was as a barber, and after he got the tourist camp going, he traveled to Flagstaff to work while Myrtle ran the store and tourist camp. Before long, several ranchers had settled in the area, and a post office was needed. Myrtle Adams became its first Post Mistress in 1924. To make mail pick-up easier, she would hang the mail sack outside so that railroad men could hook it as the train rolled by. A Texaco service station was also added. The Adams’ continued to live upstairs in the trading post through the 1920s when they moved across the highway. There, they homesteaded a piece of land, and Billy began ranching, a career he continued, increasing their landholdings until they wound up with a sizeable spread and retired in the late 1960s.

Winona grew as people began to travel Route 66 in earnest, winding up with a population of just over 100 people. However, the small town’s Route 66 heydays would be short, as, in 1937, the highway was routed south of the town, bypassing it altogether. The Adams’ sold the store in the 1940s to a couple named the Pills, who added a garage offering mechanical work. When Mr. Pill retired, his son, Bill, took over the operations. It then sold two more times and is currently in operation today as a Shell Station.

Winona never really prospered like so many other small towns along the Mother Road and was never incorporated. It gained its greatest notoriety by being mentioned in Bobby Troup’s Get Your Kicks on Route 66 song. Today, there is little left of Route 66 here, except for a great old bridge.