Though most people of today’s generation have never even heard of Burma-Shave, ask anyone who lived from the 1920s to the early 1960s, and you will most likely bring up a few memories and tales from that vintage era.

Burma-Shave was a brand of brushless shaving cream that was sold from 1925 to 1966.  The company was notable for its innovative advertising campaign, which included rhymes posted all along the nation’s roadways. Typically, six signs were erected, with each of the first five containing a line of verse, and the sixth displaying the brand name.

Burma-Shave was the second brushless shaving cream to be manufactured and the first one to become a success.

The product was sold by Clinton Odell and his sons Leonard and Allan, who formed the Burma-Vita Company, named for a liniment that was the company’s first product. The Odells were not making money on Burma-Vita, and wanted to sell a product that people would use daily. A wholesale drug company in Minneapolis, Minnesota, where the company was located, told Clinton Odell about Lloyd’s Euxesis, a British product that was the first brushless shaving cream made, but which was of poor quality. Clinton Odell hired a chemist named Carl Noren to produce a quality shaving cream and after 43 attempts, Burma-Shave was born.

To market Burma-Shave, Allan Odell devised the concept of sequential signboards to sell the product. Allan Odell recalled one time when he noticed signs saying Gas, Oil, Restrooms, and finally a sign pointing to a roadside gas station. The signs compelled people to read each one in the series and would hold the driver’s attention much longer than a conventional billboard.  Though Allan’s father, Clinton, wasn’t crazy about the idea he eventually gave Allan $200 to give it a try.

In the fall of 1925, the first sets of Burma-Shave signs were erected on two highways leading out of Minneapolis. Sales rose dramatically in the area, and the signs soon appeared nationwide.  The next year, Allan and his brother Leonard set up more signs, spreading across Minnesota and into Wisconsin, spending $25,000 that year on signs. Orders poured in, and sales for the year hit $68,000.

Burma-Shave sign series appeared from 1925 to 1963 in all of the lower 48 states except for New Mexico, Arizona, Massachusetts, and Nevada. Four or five consecutive billboards would line highways, so they could be read sequentially by motorists driving by.

This use of the billboards was a highly successful advertising gimmick, drawing attention to passers-by who were curious to discover the punch line. Within a decade, Burma-Shave was the second most popular brand of shaving cream in the United States. 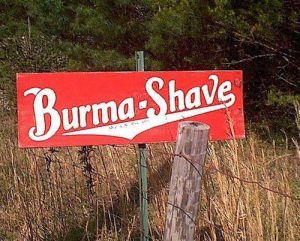 The first set of slogans were written by the Odells; however, they soon started an annual contest for people to submit the rhymes. With winners receiving a $100 prize, some contests received over 50,000 entries.

At their height of popularity, there were 7,000 Burma-Shave signs stretching across America. They became such an icon to these early-day travelers that families eagerly anticipated seeing the rhyming signs along the roadway, with someone in the car excitedly proclaiming, “I see Burma-Shave signs!” Breaking up the monotony of long trips, someone once said, “No one could read just one.”

Burma-Shave sales rose to about 6 million by 1947, at which time sales stagnated for the next seven years, and then gradually began to fall.  Various reasons caused sales to fall, the primary one being urban growth. Typically, Burma-Shave signs were posted on rural highways and higher speed limits caused the signs to be ignored. Subsequently, the Burma-Vita Company was sold to Gillette in 1963, which in turn became part of American Safety Razor, and Phillip Morris. The huge conglomerate decided the verses were a silly idea and one of America’s vintage icons was lost to progress.

By 1966, every last sign disappeared from America’s highways. A very few ended up in museums, including a couple of sets that were donated to the Smithsonian Institution. Here are two of them:

but not your chin – use

Philip Morris sold the Burma-Shave brand name to American Safety Razor Company in 1968, but the name remained dormant until 1997 when it was reintroduced for a line of shaving cream, razors, and accessories. Although the original Burma-Shave was a brushless shaving cream, the name currently is used to market a soap and shaving brush set.

In recent years, replica’s of the Burma Shave signs can be found along Route 66 in Arizona. Have you seen any other replica’s in your travels? Let us know in the comments section below.

Continue on to Burma-Shave Slogans 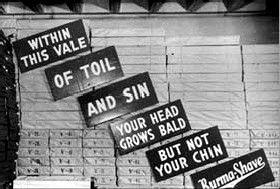 Valentine Diners Across the Mother Road