Mad as a Hornet – Very mad.

Made His Jack – Got what he aimed at. 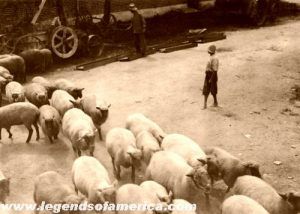 A derogatory name for sheep was maggot, photo 1916 by Lewis Wickes Hine.

Mail-Order Cowboy – This was a derogatory term used to chide tenderfoot, urban “cowboys” who arrived from the East all decked out in fancy but hardly practical Western garb.

May Hay – To put in disorder, to make confusing.

Make Hay While the Sun Shines – To make the most of the day, or an opportunity.

Make a Mash – Make a hit, impress someone. (Usually a female.) “Buck’s tryin’ to make a mash on that new girl.”

Making Meat – On the Western prairies, cutting into thin slices the boneless parts of the buffalo, or other meat, and drying them in the wind or sun. Meat thus prepared may be preserved for years without salt.

Make Tracks – To leave, to walk away. A figurative expression of Western origin.

Man-a-hanging – A man having difficulties.

Man At The Pot – According to camp etiquette, when a cowboy gets up to refill his cup from the coffee pot hanging over the campfire, if someone shouts, “Man at the pot!” the man at the coffee pot is required to fill everyone’s cup.

Manner Born, To the – A natural. “He’s a horseman to the manner born.”

Man for Breakfast – A murdered body in the streets at dawn. Commonplace in the early days of Los Angeles and Denver. Also used to describe certain saloonswhen men were killed the night before. “Lambert’s only had two men for breakfast.”

Man-trap – Cow dung in the fields, or, a widow.

Marm – A corruption of the word madam or ma’am.

Marooning – To go marooning.  To have a party or picnic.

Mauks – Derogatory term for women of the lower class or prostitutes.

Mealer – A partial abstainer who drinks liquor only during meals.

Milestonemonger – Some who likes to roam, a tramp.

Millrace – A channeled stream of water that runs through a mill to push the mill wheel.

Mind, Have a – To have a notion, to be willing.

To Mind – To recollect, remember or to take care of..

Missionate – To act as a missionary.

Mitten – When a gentleman is jilted by a lady, or is discarded by one to whom he has been paying his addresses he is said to have got the mitten.

Miss one’s figure – to miss a change, to make a mistake.

Mitten, Get or Give  – Turned down by a lady after proposing.

Miss Nancy – A name given to an effeminate man.

Mizzle – To run away, to abscond. 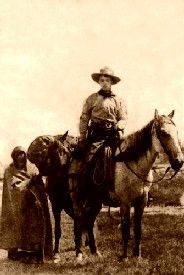 Mochilla – A rectangular leather saddlebag popularized by the Pony Express.

Molled – In the company of a woman.

To Monkey – To play tricks, fool or tamper with, mischievious.

Monte – A gambling game played with dice or cards.

Moonshine – A trifle, nothing.

Mosey – To saunter or shuffle along, to be off, to leave, to sneak away.

Moss-backs – Old fogies, men behind the times, slow to learn.

To Mouse – To go mousing about is to go poking about into holes and corners.

Mouth-bet – A gambling man who only gives verbal promises to pay.

Muck Forks – A low term for hands or fingers. “Keep your muck forks off me!”

Muck-out – To a gambler, to “clean-out” an opponent.

Mucks, Mux – To make a muddle or failure of anything. “He made a regular mux of the whole business.”

Muck-snipe – To gamblers, the one who has been “cleaned out.”

Mud Pipes – Any kind of boots or shoes, but mostly applied to riding-boots.

Mud Fence, Ugly as a – Used to describe someone who was very ugly. 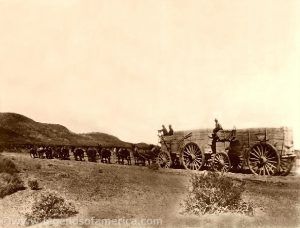 Muleskinner – A person who drives and usually rides in a wagon pulled by mules.

Muley – A one-horned or hornless cow.

Mustard – To unsettle or disturb cattle.

Mutton-Puncher – Derogatory name used by cowboys to describe a sheepherder.

Mysteries – Sausages, called that because many didn’t know what they were made of.