Nailed to the Counter – Proven a lie.

Nancy or Nancy-boy – An effeminate man. 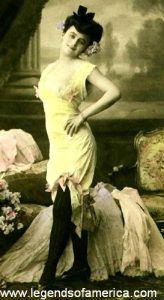 A Nanny poses for the camera.

Necktie Social or Necktie Party – A hanging or lynching, most often referred to in vigilante hangings.

Nester – A squatter who settled on government land, usually to farm.

Nibble – To take or steal.

Nigh Unto – Nearly, almost.

Night Hawk – While the rest of the cowboys slept under the stars on a cattle drive, one unlucky soul who drew the short straw, the “night hawk”, had to stay up all night standing guard.

Nipper – A baby or small child.

No Count or No Account – Of no account, worthless.  “That no count boy does nothing but get into trouble.”

No Odds – No difference, no consequence, no matter.

Nosey Parker – Someone who is nosey.

Not By a Jugful – No consideration, on no account, not at all.

Notch – An opening or narrow passage through a mountain or hill.

Nothing To Nobody – Nobody’s business.

Notions – A wide range of miscellaneous articles for sale.

Nurly – A corrupt pronunciation of gnarly, i. e. gnarled.

Odd Fish or Odd Stick – A person who is eccentric or odd in his manners. “Ol’ Farmer Jones sure is an odd stick.”

Off his nut, off his rocker, off his chump – Weak in the head, crazy, illogical; someone who behaves strangely.

Off one’s feed – Unable to eat, having no appetite.

Of the First Water – First class. “He’s a gentleman of the first water.”

Oh-be-joyful – Liquor, beer, intoxicating spirits. “Give me another snort of that oh-be-joyful.”

Old – Crafty, cunning. If someone tries to take advantage of someone else, who is too cunning to be deceived, he might say “I’m a little too old for you.”

Old Country – A term applied to Great Britain, originally by natives from that country, who had immigrated to the United States.

Old Countryman – A native of England, Scotland, Ireland, or Wales. The term was never applied to persons from the Continent of Europe.

Old Dan – Often used to refer to a trustworthy mule.

Old Man – The ridge found between two sleepers in a feather bed. 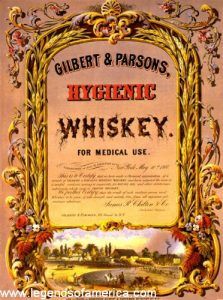 Whiskey was called lots of names, one of which  was “Old Orchard.”

Old Pie – An expression of admiration or approval.

Old Rats – Equivalent to “one of the boys,” a hearty old fellow.

Old Stager – One well initiated in anything.

On One’s Own Hook – On one’s own account, for himself. “He is doing business on his own hook.

Old Woman – The cowboy’s cook. Though the cook was often the most popular man on the cattle drive, cooking was still considered to be “women work.”

On or In A Pinch – On an emergency.

On the Dead – Gratis, free.

On the Dodge – Hiding out somewhere; laying low for a while.

On the half-shell – Applied to anything prepared and ready for use.

On the Prod – Full of piss and vinegar, looking for trouble, spoiling for a fight. Said of both people and critters.

On the Shoot – Looking for trouble. “Looks like he’s on the shoot, tonight.”

On the Win – Winning or making money.

Opine – To be of the opinion.

Outlaw – A horse that cannot be tamed to ride.

Over Head And Ears – Completely overwhelmed. “He was over head and ears in debt.”

Out And Out – Wholly, completely, without reservation.

On The Fence – Neutral or undecided.

Out Of Fix or Out of Sorts – Disarranged, in a state of disorder.