Ears – To be by the ears, denotes being in a quarrel or fight.

Elephant – Short for ‘to see the elephant’; to go to town, or to see the world, usually for the first time.

Eucher, euchered – To out-smart someone, to be outwitted or suckered into something.

Eventuate – To issue, come to an end, close, terminate.

Excuse-me-ma’am – A bump in the road.

Exodusters – The Biblically inspired name taken by black emigrants who departed the post-Civil War South for the promised land of Kansas.

Express – The mails or mail stage.

“Freely, good sir, we will forgive your attacks upon our national character; but spare our mother tongue!”

— Thomas Jefferson in Notes on the State of Virginia, which appeared in the European Magazine and London Review in 1787. 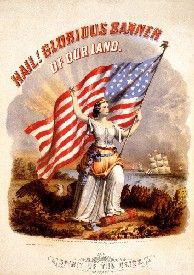 Fag – In cowboy talk, to get out fast.

Fagged Out – Fatigued, worn out.

Fair Shake – A fair trade, a satisfactory bargain or exchange. 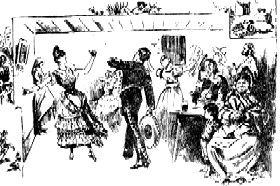 Fandango – From the Spanish, a big party with lots of dancing and excitement.

Faro – A card game that took its name from faroon, a derivative of pharaon (pharoah.) The Pharoah was the king of hearts in a regular deck of cards. Players bet on the order in which cards would be drawn from a box.

Fat In The Fire – To have one’s plans frustrated. “If I don’t get this job completed, the fat’s going to be in the fire.”

Feeze – To be in a feeze is to be in a state of excitement.

Feller – Fellow. “That big feller over there is the sheriff.”

Fetch – Bring, give. “Fetch me that hammer.” “He fetched him a punch in the nose.”

Fice – A worthless dog, mongrel. Also referred to as fiste and tyst.

Fid Of Tobacco – A chew, or quid of tobacco.

Fill a Blanket – Roll a cigarette.

Find One’s Self – To provide for one’s self through labor and wages.

Fish – A cowboy’s rain slicker, from a rain gear manufacturer whose trademark was a fish logo. “We told him it looked like rain, but left his fish in the wagon anyhow.”

Fish or Cut Bait – Do it or quit talking about it.

Fit – Often used instead of “fought.”

Fit – A short return after intermission, a turn, a period or interval. “I almost lost my crops after that fit of cold weather.”

Fits And Starts – At short and sudden intervals interruptedly.

Five Beans in the Wheel – Five cartridges in the six chambers of a rvolver. Westerners often left the chamber under the hammer empty for safety reason.

Flannel Mouth – An overly smooth or fancy talker, especially politicians or salesmen. “I swear that man is a flannel-mouthed liar.”

Flat – A foolish fellow, a simpleton. Also refers to a flat-bottomed boat.

Flat Out – To collapse, to prove a failure.

Fling – A sneer or contemptuous remark

Flitter – A corruption of the word fritter, a pancake.

Flunk Out – To retire through fear, to back out.

Fob Off – To delude by a trick.

Folded Up – A horse bucking.

Fore-Handed – To be in good circumstances, to be comfortably off. 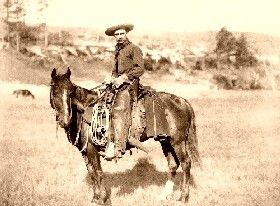 This cowboy is “forking” a horse.

Fork a Hoss – To ride a horse.

Forted In – Entrenched in a fort.

Fox Boots – To fox boots is to repair them by adding new soles or leather.

Free-Soilers – People opposed to the extension of slavery. The name came from the Free-Soil Party, which existed from 1848 to 1854.

French Leave – To depart without taking leave, to run away.

Freshet – A flood or overflowing of a river due to heavy rains or melted snow.

Frolic – A celebration, party or a wild time. Also sometimes used to instead of “fight.”

Frump – To mock, to insult.

Fudge – An expression of contempt, usually bestowed on absurd or talking idlers.

Full as a Tick – Very drunk.

Full Chisel or Full Drive – At full speed, executed with everything you’ve got.

Full-Rigged – A saddle that is completely leather-covered.

Full Split – With the greatest violence and impetuosity

Funkify – To frighten, to alarm.

Fuss – Disturbance. “They had a little fuss at the saloon.” 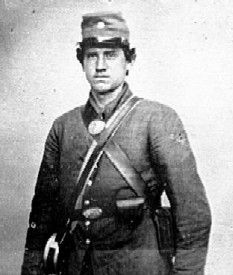 Gadabout – One who walks about without business

Gal-Boy – A romping girl or tomboy.

Galvanized Yankees – Former Confederate soldiers who served in the U.S. Army in the West following the Civil War.

Gat – A gate or passage.

Gay Cat – One who cases banks and towns for future jobs

Gee Up – A term used by teamsters to their horses and oxen, when they wish them to go faster. “To Gee” means to agree.

General Treat – A general treat is a treat of a glass of liquor bought by one person in a tavern to the whole company present. Buying a round of drinks.

Gerrymandering – To arrange the political divisions, so that in an election, one party may obtain an advantage over its opponent, even though the latter may possess a majority of the votes in the State.

Get a Wiggle On – Hurry.

Get Gaited – Get going in a hurry. Gait refers to the rate a horse moves, which is far faster, so “get going.”

Get it in the Neck – Get cheated, misled, bamboozled.

Get my/your back up – To get angry. “Don’t get your back up, he was only joking.”

Get the Mitten – To be rejected by a lover. “Looks like Blossom gave poor Buck the mitten.”

Ginnin’ About – Moving around fast.

Girls of the Line – Prostitutes.

Gitty-up – Go, Move. A term used to get the horse to start moving.

Give Him Jessy – To give a flogging.

Give the Mitten – When a lady turns down a man’s proposal or discards him.

Go It Strong – To perform an act with vigor or without scruple.

Go Boil Your Shirt – Take a hike, get lost, bug off.

Gone Coon – A goner, past recover, a lost man. Also called a gone sucker and a Gone Goose.

Go the Big Figure or Whole Figure – To go to the fullest extent in the attainment of any object, do things on a large scale.

Got the Bulge – Have the advantage. “We’ll get the bulge on him, and take his gun away.”

Go the Whole Hog – Out and out in favor of anything. A softened form of the phrase is to go the entire animal.

Go Through The Mill – A metaphor alluding to grain which has been through the mill.

Goyathlay – Means “one who yawns.”

Grab a Root – Eat a meal, especially a potato.

Grab the Apple – Taking hold of the saddle horn to avoid falling off. Also called “grab the nubbin.” In either case, this was not something a self-respecting cowboywanted to be caught doing.

Grail – Small particles of any kind.

Granger – A derogatory term for a farmer. 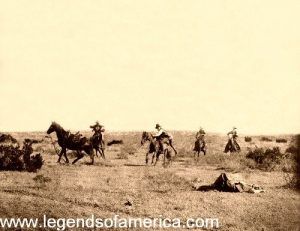 Grassed – To be thrown from a horse.

Greenhorn – An easterner innocent of cowboy ways. Also referred to as greeners, green peas, and tenderfoots.

Gringo – A derogatory word for Anglos. One source claims it comes from a shortening of the title of a popular song during the Mexican War: “Green Grow the Lilacs.”

Grist – A quantity or bunch. “There’s been a mighty grist of rain lately.”

Grocery – A bar or saloon.

Grog – To seamen, gin and water, or any spirit and water.

Groggery – A bar or saloon.

Growlers – Buckets, cans, or pitchers carried by apprentices or children to the saloon to be filled with beer and returned to the workplace during the day. They were called “growlers” because of the grating noise when slid across the bar. Fetching the beer from the saloon in a growler was called rushing the growler, working the growler, or chasing the can. 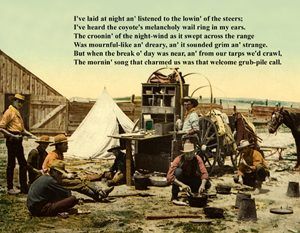 Grub Pile – Referring to a meal or to the chuckwagon.

Grub Slinger – The cook; also referred to as grub spoiler or grubworm.

Grubstake – To provide the materials a prospector needs, including food and money, in return for a percentage of any claim that the prospector might find.

G.T.T. – Gone To Texas. A common expression in use following the Civil War. People would find the letters G.T.T. carved into their doors, left by a kin. Many outlaws went to Texas.

Gull – A cheat, fraud or trick. Also, refers to a stupid animal or person, one easily cheated.

Gump – A foolish person, a dolt.

Guttersnipe – A homeless child who roamed and slept in the streets.