Ugly as a Mud Fence – Used to describe someone who was very ugly.

Uncorkin’ a Bronc – Breaking a horse.

Unshucked – Cowboy talk for naked. An unshucked gun is one that’s out of the holster.

Up a Tree, Treed – In difficulty, cornered, unable to do anything.

Upper Story – The brain, the head. “He’s not right in his upper story.” 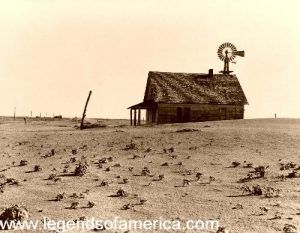 This farm was left to go “up the spout” after the dust bowl days. Image from 1938 near Dalhart, Texas.

Up the Spout – Gone to waste or ruin.

Up Stakes – To depart in a hurry. Same as “cut stick.”

Up To The Hub – To the extreme point.

Up To Snuff – To be flash, to be shrewd.

Up the Spout – Imprisoned.

Up To Trap – Knowing, shrewd.

Valley Tan – A kind of liquor sold in Mormon Country.

Vamoose – To disappear or leave quickly.

Varmint – A corrupt pronunciation of the word vermin.

Vission Quest – An attempt to achieve a vision of a future guardian spirit, traditionally undertaken at puberty by boys of the Plains Indian peoples, typically through fasting or self-torture.

Wabble – Make free use of one’s tongue, to be a ready speaker.

Waddy – One of the words for cowboy, especially a cowboy who drifted from ranch to ranch and helped out in busy times.

Wake Snakes – To raise a ruckus.

Wake up/Woke up the Wrong Passenger – To trouble or anger the wrong person.

Wamble-Cropped – Sick at the stomach, and figuratively, wretched, humiliated.

Wampum – In the Massachusetts Indian language, this word means white, or the color of shells.

Wap – To throw quickly, to flap

War Bag – Cowboys traveled light, and stored their meager worldly possessions in his “war bag”. Inside was generally everything he owned, typically an extra set of clothes, extra ammunition, spare parts for equipment, playing cards, bill of sale for his horse, and maybe a harmonica or a few precious letters. Also called a “war sack” and a “yannigan bag.”

Washy – Weak, not firm or hardy.

Way-Bill – A list of the passengers in a stage-coach, railroad car, steamboat, or other public conveyance.

Wearing the Bustle Wrong – Referring to a pregnant woman.

Weather-Breeder – A cloudless sky, after a succession of rainy weather, denotes rain, and is said to be a weather breeder. 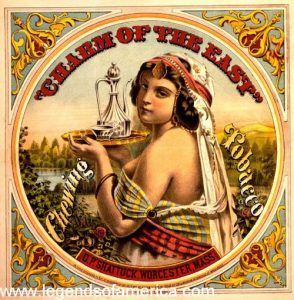 Tobacco was often referred to as “weed.”

Weed – A common term for tobacco.

Well To Live – To be in easy circumstances, to live comfortably.

Whacker – Anything very large, same as a “whopper.”

Whale Away – To preach, talk or lecture continuously or vehemently.

Whang – Sinews of the buffalo or another animal, or small strips of thin deer-skin, used by the dwellers and hunters of the prairies for sewing.

Whaling – A lashing, a beating.

Whap – A quick and smart stroke.

Whapper or Whopper – Anything uncommonly large, as, ‘That’s a whopper,’ meaning a monstrous lie.

What in the Tarnation – A polite way of saying “What the hell?”

To Wheal – To swell.

Whelk – An old name for a pustule, a pimple. The word is not much used in America.

Whim-Wham – A toy, a freak, a strange fancy.

Whitewash – To gloss over or hide one’s faults or shortcomings.

Who-Hit-John – Liquor, beer, intoxicating spirits. “He had a little too much who-hit-John.”

Whoremonger – A man who frequents prostitutes.

Wicket – A place of shelter, or camp made of the boughs of trees.

Wipe Your Chin – Be quiet.

Wolfer – A man with a large appetite or a hard drinker.

Wooding-Place – A station on the banks of a river where the steamboats stop to take in supplies of wood.

Woolsey – A cheap hat, usually made of wool.

Worm-Fence – A rail fence laid up in a zig-zag manner.

Worse Than a Cat in a Roomful of Rockers – Someone who is really nervous.

Wrapper – A loose dress or gown.

Wrinkled His Spine – A horse bucking. 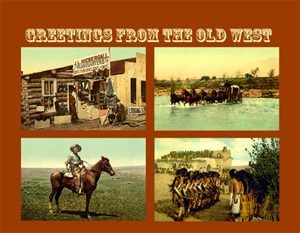 Yannigan Bag – A bag in which the cowboy carried personal items, also known as a “war bag.”

Yellows – Often pronounced yallers. A disease of horses and cattle, which is indicated by a yellow appearance of the eyes, inside of the lips, etc.

Zitted – Zipped, flew. “The bullets zitted about in every direction.”