Tail-Race – The water course leading from a mill after it has passed the water-wheel.

‘Taint – A corrupt abbreviation for it is not.

Take French Leave – To desert, sneak off without permission.

The cowboys who worked for the Aztec Land & Cattle Company, known as the Hashknife Outfit, in Arizona  “took the rag off” many other “saddle stiffs.” Photo, 1897.

Take the Rag Off – Surpass, beat all. “Well, if that don’t take the rag off the bush.”

Talk a donkey’s hind leg off – To talk with no purpose.

Tallow – Fat, whether on humans or animals.

Tally – To live tally is to live as man and wife though not married.

Tan Your Hide – Spanking. “I started raisin’ Cain, an my mama said she was going to tan my hide!”

Taos Lightening – A name given to any potent liquor.

Tarnation – A mild oath or explanation.

Teapot – A depot or railroad station.

Techy or  Techy as a Teased Snake – Grumpy, irritable.

Tee-Totaller – A thorough temperance man, who avoids every kind of ardent spirits, wine, and beer.

Tejas – When the Spanish first arrived in America, the present state of Texas was called Tejas, a Spanish version of a Caddo Indian word meaning “allies.”

Tenderfoot – A person new to the job, or a young person.

Tenderloin – The red-light commercial district of a town, featuring brothels.

That Dog Won’t Hunt – That idea or argument isn’t going to work. Or, the person saying it doesn’t believe what you’re saying.  After I broke curfew for the second time and blamed it on my car catching fire, my daddy said to me, “Traci, that dog won’t hunt.”

There You Ain’t – Expresses a failure. The opposite of “There you are.”

Three Ways from Sunday – Moving quickly; high-tailing it out of there.

Three-by-nine smile – A laug or smile to the full extent on the jaws.

Throw Off on – Make fun of.

Throw up the sponge – Quit, give up, surrender.

Tied Up – Given over, finished.

Tiger Town – Refers to an alley, street or district that had many gambling halls where Faro was played. Also referred to as “Tiger Alley.”

Tilt On – to come across, meet. 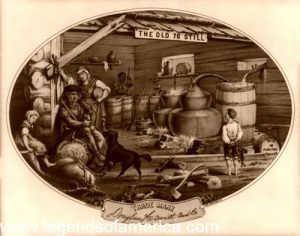 Tin-horn Lot – A term used to express contempt towards a small-minded or mean fellow.

Tinker’s News – News that has already been heard or told before.

Tight Scrouging – Hard squeezing. Said of anything difficult to accomplish.

Tin – A slang word for money. ‘Kelter,’ ‘dimes,’ ‘dough,’ rocks,’ and many other words are used in the same manner.

We never put tin on a horse to win,
Lack of oof explains it partly,
But the horse that will be in the final three,
Is the one that races Smartley.
— Sporting Times.

Tiswin – A kind of weak beer brewed from corn, popular among the Apache.

Titivate – To dress up.

Tit For Tat – I shall treat you as you treat me.

Titter – An eruption on the skin.

Toddle, Tortle, Turtle – To be off.

Toddy – A kind of punch made of rum, water, sugar, and nutmeg.

Toff – A dandy, a swell, one who dresses well. “Toffer” is the female version.

To Rights – In the proper way.

To Toll – To entice, to lead on. Western.

Tongs – A name for pantaloons and roundabouts formerly in use in New England.

Too Big For His Breeches – Said of a man who is above his business, arrogant, haughty.

Too Much Mustard – A braggart.

Trace – A trail or path.

Trailing – Moving cattle from one location to another.

Trampous, Trampoose – To walk, to lounge or wander about, to tramp.

To Tree – To take refuge in a tree, usually said of a wild animal. To tree oneself, is to conceal oneself behind a tree.

Trimmings – Bread and butter and other necessary eatables for the tea-table.

Truckage – The charges for carrying on a truck, the cartage.

Tuckered Out – Tired out, fatigued.

Twist – A good appetite. Also to outlaws, it means to hang.

Twistical – Tortuous, unfair, not quite moral.

Twisting the Tiger’s Tail – Playing Faro or poker. Also referred to as “bucking the tiger.”

Two Whoops and a Holler – Not far away.