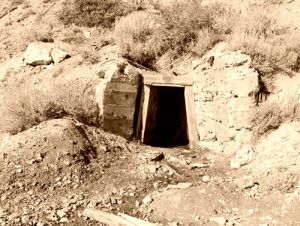 Adit at the Lucky Tiger Mine, Humboldt County, Nevada. Click for prints & products.

Adit – An entrance to a mine, generally a horizontal tunnel.

Alluvial or Bench Deposits – An ancient river-washed rock and gravel bar that may be thousands of feet from the nearest stream, creek, or river. Alluvial or bench deposits contain untapped potential for finding gold because such areas have never been worked before. The hydraulic giants generally worked alluvial deposits.

Alluvium – A deposit of loose gravel between the superficial covering of vegetable mold and subjacent rocks.

Amalgamation – The technique of using mercury to attract small particles of crushed gold and join with them in an amalgam, or alloy. Gold may be recovered by distilling off the mercury.

Arastra – A mill, consisting of one or more large stones dragged around on a circular bed, used to grind ore.

Assaying – Finding the percentage of a given metal in ore or bullion.

Bar Claims – Gold found in in low collections of sand, or gravel, in rivers, exposed at low water.

Bench Claims – Minerals found in narrow tableland on hill-side, above a river.

Blende – An ore of zinc, consisting of zinc and sulphur.

Blind Lode – A lode having no outcrop.

Blossom Rock – Float ore, found upon the surface or near where lodes or ledges outcrop, and from which they have become detached.

Bonanza – Fair weather; a mine said to en bonanza when it is yielding a profit. It is a Spanish term meaning good-luck.

Breasting Ore – Taking ore from the face, breast or end of a tunnel. Bullion. – Precious metals, gold and silver, etc., not coined.

Bucket Line Dredge – Unlike modern dredges; a bucket line dredge was very large. Instead of sucking up water and gravel through the use of water pressure, the bucket line dredges would scoop it up and run it through a long sluice box.

Cage – The elevator used for hoisting and lowering the ore cars, men and materials of a mine.

Carbonate – A geological formation which carries silver ore, and from 5 to 70 per cent. of lead.

Chilean Mill – A machine, somewhat like the arastra, in which heavy stone wheels turn about a central shaft and crush ore.

Chlorides – A compound of chlorine and silver. 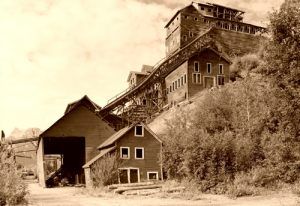 A large chute at the Kennecott Copper Mine in Alaska. Click for prints & products.

Chute – An inclined channel through which ore slides.

Chopping – The rock that appears on the surface indicating the presence of a lode.

Claim – A piece of land 25 to 300 feet wide and 1,500 feet long, which the government sells to the man who finds mineral within its limits.

Conglomerate – Pudding stones, composed of gravel and pebble cemented together.

Contact – A touching, meeting or junction of two different kinds of rock, a porphyry and slate.

Cornish Pump – A type of pump developed in Cornwall, England, and commonly used in deep mines of the nineteenth century to raise underground water.

Crosscut – A horizontal tunnel driven perpendicular to the main direction of a vein.

Country Rock – Rock on either side of a lode or ledge, usually barren; the permanent rock enclosing a vein.