Perched on the side of Battle Mountain at nearly 10,000 feet elevation is Victor, Colorado, a village steeped in history. Filled with vintage buildings and gold mining structures, this semi-ghost town is one of the most preserved mining camps in Colorado.

Before the town was even officially platted in 1893 it had already become known as the City of Mines because the largest and richest gold mines of the Cripple Creek Mining District were located on Battle Mountain just above the camp. 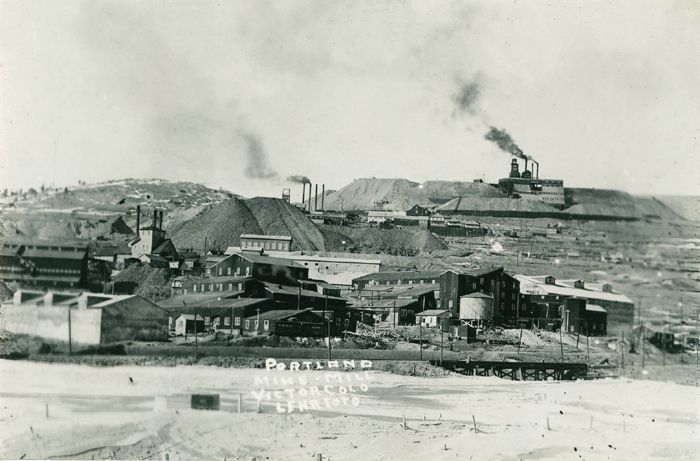 The Cripple Creek gold rush began when a cowboy and part-time prospector, Bob Womack, found gold on his cattle ranch in 1890. The ranch, bisected by a small stream called Cripple Creek, would be just the first of many locations in the Cripple Creek Mining District to be filled with rich veins of gold ore. When Womack first found the rich vein, there were less than two dozen people living in the four by six-mile long area that would be called home to more than 50,000 people in less than a decade.

When word of Womack’s find got out, the area was soon crawling with prospectors seeking out their own fortunes in the remote area on the southwestern side of Pikes Peak. Literally, overnight, the town of Cripple Creek was born, along with almost a dozen other mining camps including Victor, Goldfield, Elkton, Altman, Independence, Anaconda, Gillette, Cameron, Beaver Park, Arequa and Lawrence. 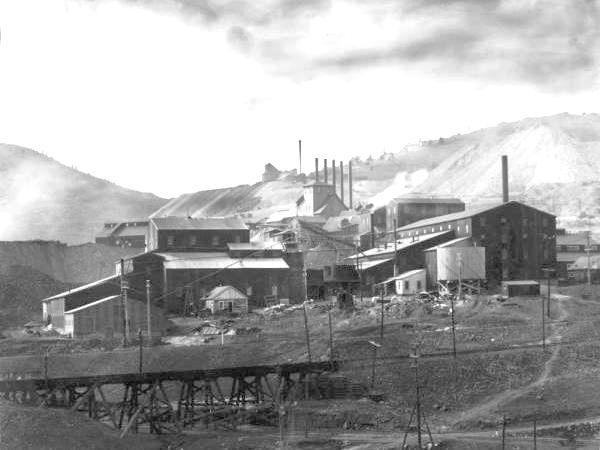 The first gold was discovered in Victor in 1891 by Winfield Scott Stratton who soon began the Independence Mine. This area, too, immediately filled up with miners. Warren Woods and his sons, Frank and Harry, soon formed the Woods Investment Company and purchased a 136-acre site at the foot of Battle Mountain, where they platted a townsite and named it Victor, after an early homesteader named Victor C. Adams. Marketing their lots as “gold mines,” the Woods sold them quickly to the many prospectors and businessmen, who built homes, stores, hotels, and a number of saloons, along with hundreds of mines.

In addition to the Independence Mine, other mines, including the Portland and Ajax Mines, were doing a brisk business just north of Victor on Battle Mountain, called the “richest hill on earth.” 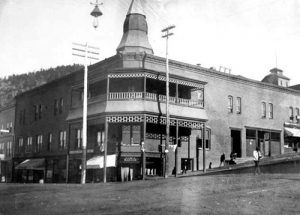 And, in the very center of town the Woods Brothers, who were excavating the foundation for the much needed Victor Hotel in 1894, discovered a rock that was rich in ore. The Woods brothers wasted no time in finding another lot for the hotel and began to build the Gold Coin Mine at Diamond and Fifth Streets, which would become one of the richest in the area, producing more than $50,000 per month in gold ore.

However, the Woods faced a problem — that of where to dispose of their mine waste. Undaunted, they created a dump and the Economic Mill some 4,000 feet away in Arequa Gulch. To reach these locations, they then built a series of tunnels beneath the streets of Victor.

In the meantime, the Woods Brothers completed the Victor Hotel just in time to accommodate travelers arriving on the newly completed Florence & Cripple Creek Railroad. The large two-story wooden frame building was a showplace with its cone-shaped tower and enclosed balconies on its second and third stories. The “modern” hotel even featured electricity. 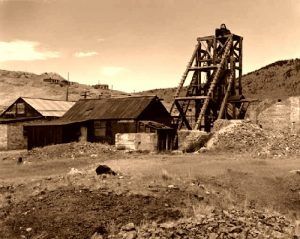 While the Woods family is most often seen as Victor’s founders, there were others in the bustling mining camp that were also making a significant impact as on the town, as well as making their own fortunes.

Two of these men, named Jimmy Burns and Jimmy Doyle, came to Victor in 1891 from Colorado Springs, after hearing about the easy gold to be found. However, by the time they arrived, most of the claims had already been staked and the major mines, including Winfield Scott Stratton’s Independence Mine, Sam Strong’s Strong Mine, the black Diamond, the Anna Lee, and the Captain Mines, were already turning out a profit on Battle Mountain.

But, Burns and Doyle remained undaunted, pouring over claim maps and measuring distances between claim stakes. Finally, they found a small area, no more than 1/10th of an acre, that remained unclaimed and after registering it, set up “shop” calling their claim the Portland. At first, they were disillusioned as they dug and dug, finding nothing in the 30-foot hole they had created. 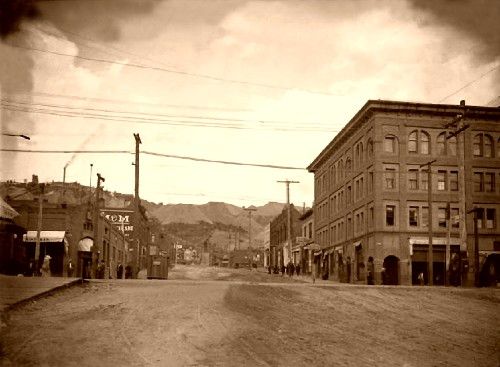 Frustrated, they asked Independence Mine employee, John Harnan, to take look. Harnan quickly realized that the rock “dump” pile that Burns and Doyle thought was worthless, was actually filled with gold. He negotiated with them for a third interest in the claim if he could “find” the gold. The two novice miners agreed and Harnan showed them a vein just about halfway down their already dug hole.

When word spread of the find, their nearby neighbors immediately began to file claims that the vein found in the Portland Mine actually originated in one of theirs. The three partners quickly began to remove sacks of gold under cover of darkness in order to horde as much as they could if the lawsuits failed to support them. Though they quickly accumulated about $70,000 in the bank, they knew they would need help to save their claim and turned to Winfield Scott Stratton for help.

Stratton, who was already well on his way to becoming a millionaire, accepted a 1/3 stake in the Portland to help the three partners. The lawsuits continued until some 47 different ones were filed against the Portland.

With Stratton backing them, the partners soon turned the lawsuits around and began to attack and buy up neighboring claims until the tiny Portland grew from 1/10th of an acre to more than 30 claims on 135 acres. After years of wrangling, the Portland had become the largest and strongest mine in the Cripple Creek Mining District.

In just a few years, Victor had developed into a town that rivaled its larger sister city of Cripple Creek, and an old saying began, “Cripple Creek gets the glory, but Victor has the gold.” 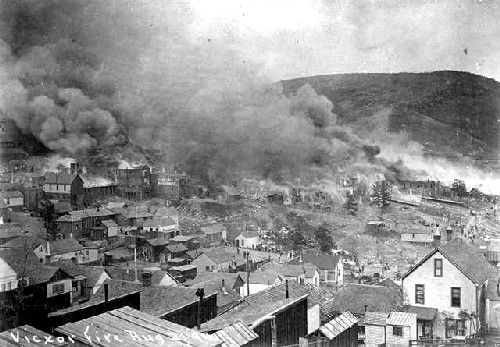 But Victor’s grand heydays would be dampened on August 21, 1899, when a fire began in a brothel in Victor’s notorious Paradise Alley. Before the blazing inferno was under control, fourteen blocks had been destroyed, including some 800 buildings, causing $1.5 million in damages, and leaving 1,500 people homeless.

As the largest property owner, the Woods Investment Company suffered the heaviest losses, including the total destruction of their bank and the original Victor Hotel. However, Victor’s citizens immediately began to rebuild and within three days the banks and saloons were back in business. 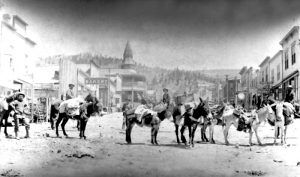 On December 24, 1899, the Woods family’s “new” First National Bank of Victor was completed which not only held their banking and investment business but also a number of retail operations.

Though the town soon prospered once again, it would be short-lived. In 1900, the main ore vein in the Gold Coin Mine began to play out and the Woods’ profits began to decline. To add to their tremendous debt, heavy financial losses in 1899, and the reduced profits of the mine, the Woods’ Economic Mill burned.  For the Woods Investment Company, the future was looking extremely grim.

Though they were said to have been worth some $45 million, the company was heavily leveraged and rumors of their impending collapse caused a run on the First National Bank of Victor. Trying to recoup, the Woods Investment Company consolidated its miscellaneous mining properties into the United Gold Mines Company in 1902. 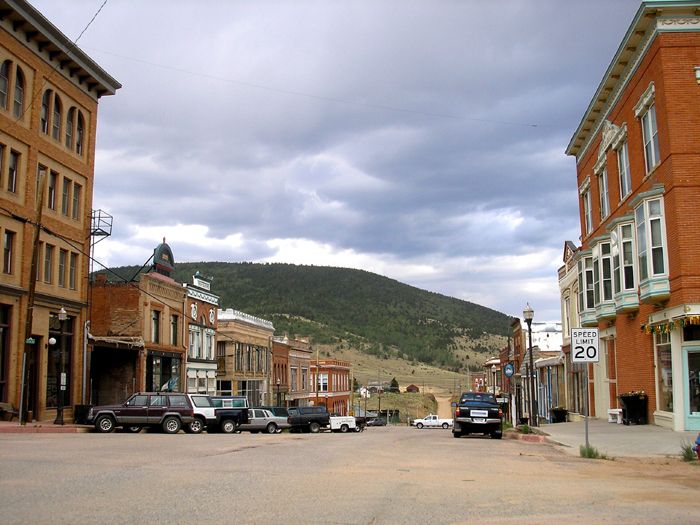 Though the family hoped to issue shares in an exciting new company, so they might use them as loan collateral, their efforts would be in vain. Their bank was forced to close its doors on November 4, 1903, when bank examiners declared it insolvent. Over the next several years, the Woods Family Empire collapsed and the Woods Investment Company closed its doors permanently in 1910. 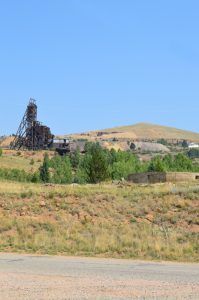 Harry Woods ended up moving to California where he started a new business in oil. Though he did comfortably well, he never lived the lavish life he had during Victor’s heydays. He died in moderately comfortable circumstances in 1928.

Frank, on the other hand, didn’t fare as well. A number of personal tragedies affected him when he lost his son in a mining accident, and his daughter and wife both passed away. After remarrying, his second wife also died. Though he tried several new ventures, he was never able to make a financial comeback. When he died in Los Angeles in 1932, his friends had to take up a collection to pay for his burial.

At its peak, over 500 mines dotted the landscape surrounding Victor and some 50,000 people called the area home. But like the Woods’, Victor’s days of prosperity ended in the early 1900s when the vast majority of the gold was panned out or too expensive to get to. In the end, more than 22 million tons of gold had been taken from the area’s many mines. 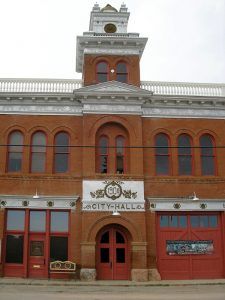 Through the years, the value of the gold mined in Teller County was greater than all other gold mining operations ever conducted in the United States combined, and, unlike most Colorado mining towns, Victor’s gold has not been depleted. Today, the Cripple Creek & Victor Gold Mining Company continues to operate the largest open pit and heap leach mine in Colorado.

Though the gold mining of today cannot match the excitement of Victor’s heydays of a century ago, it has again become the focus of the city’s economy and has added much to the preservation of the district. In addition to meeting the many environmental requirements, the Cripple Creek & Victor Gold Mining Company has built a number of trails and set up mining equipment exhibits in cooperation with a local volunteer group.

Today, Victor remains much the same with its 1890s architectural buildings and headframes dotting the landscape. Beneath Victor’s streets, more than two miles of Gold Coin tunnels remain. The entire city, as well as a number of buildings, has been placed on the National Register of Historic Places. Be sure to take a look at Victor’s City Hall, built in 1900. The two-story Classical Revival building has been fully restored and continues to house the city clerk’s offices, the municipal court, and the police department as well as a new visitor center and museum. At 230 N. 4th Street, the Midland Terminal Railroad Depot also continues to stand, as well as the Victor Hotel in the Woods old bank building, and Stratton’s Independence Mine and Mill just outside of town. 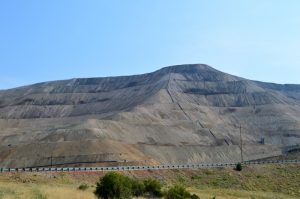 Other mining remnants can also be seen at the Gold Coin Mine at Diamond and 5th streets, the Cresson head frame adjacent to the baseball field, and the Battle Mountain Interpretive site, which includes numerous mining remains, as well as old photographs, and the city’s history.

Of the Cripple Creek Mining District, only Victor, Gillette, Goldfield, and Cripple Creek remain today. The other many towns have long since disappeared.

To reach Victor from Colorado Springs, drive west on U.S. Highway 24, then turn left  (south) onto Colorado Highway 67 at Divide. Drive toward Cripple Creek and turn left off the highway onto Teller County Road 81 (near the former town of Gillette, marked with a tiny airplane hanger).