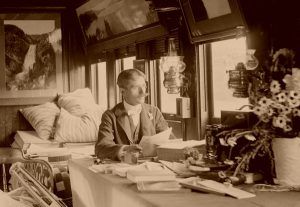 The Detroit Publishing Company was an American photographic publishing firm best known for its large assortment of photochrom-color postcards and prints. First called the Detroit Photographic Company, it was launched in the late 1890s by Detroit, Michigan businessman and publisher William A. Livingstone, Jr., and photographer and photo-publisher Edwin H. Husher.

They obtained the exclusive rights to use the Photochrom process for the American market. This technique, developed in Zurich, Switzerland, converted black-and-white photographs into color images and allowed the company to mass-produce color postcards and prints long before color photography became economically feasible. The company specialized in postcards of American and European subjects, including cityscapes, reproductions of artwork, natural landmarks, and folklore.

Prominent subjects include buildings and views in towns and cities, colleges and universities, battleships and yachts, resorts, natural landmarks, and industry. 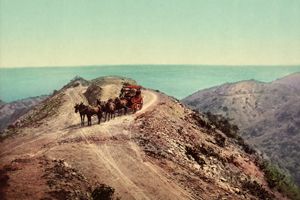 In 1897, Livingstone persuaded the accomplished American landscape photographer, William Henry Jackson, to join the firm. This added the thousands of negatives produced by Jackson to the Detroit Publishing Company’s inventory. Jackson moved to Nebraska after the Civil War and was active in the West from about 1870 to about 1890. His photographs for the U.S. Geological and Geographic Survey of the Territories influenced the establishment of Yellowstone and other early national parks. Jackson’s collection included city and town views, images of prominent buildings, scenes along railroad lines, views of hotels, and landscapes, especially in the American West.

In the late 1890s, the Detroit Publishing Company expanded its inventory to include photographic copies of works of art, which were popular educational tools and inexpensive home decor. 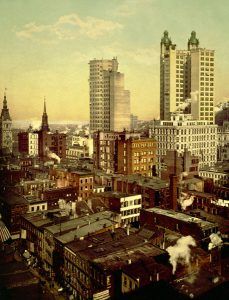 In 1898, William Henry Jackson became president of the company and, in 1903, also became the plant manager, leaving him with less time to travel and take photographs. The firm was known as the Detroit Photographic Co. until 1905, when it became the Detroit Publishing Company.

In about 1910, the company expanded its inventory and, during its height, drew upon 40,000 negatives for its publishing effort and had sales of seven million prints annually. At this time, it also employed about 40 artists and more than a dozen traveling salesmen.

With the declining sale of photographs and postcards during World War I, and the introduction of new and cheaper printing methods used by competing firms, the Detroit Publishing Company went into receivership in 1924. Jackson left the company the same year. Its assets were liquidated in 1932, but Jackson kept the negatives.