Ike N. “Buck” Stinson, an alleged member of a road agent gang called the Innocents, operating out of Bannack, Montana, who was hanged by Montana Vigilantes.

Born in Greencastle, Indiana, he moved with his family to Andrew County, Missouri, at the age of 14. From a respectable family, he was described as intelligent, studious, and as having a bright future. However, when he grew up, he headed west and, upon reaching Montana, got involved with bad influences. After he arrived in Bannack, Stinson rented a corner space in Cyrus Skinner’s saloon, set up a barber chair, and made his living cutting hair when he wasn’t drinking, gambling, or getting into arguments with other men in the saloon.

In the spring of 1863, Stinson murdered a friendly Bannock Indian chief for no apparent cause and would later brag about it. Despite his reputation, after Henry Plummer was made sheriff on May 24, 1863, he appointed Stinson as one of his deputies. Though Plummer hired a couple of other “roughs” with less than sterling reputations, he also hired several respectable men, one of which was John Dillingham, who was made the chief deputy.

But, deputies like Buck Stinson, Charley Forbes, and Ned Ray, who were living on the “fringe” and thought to have been outlaws themselves, didn’t like Dillingham’s honesty. When Dillingham tried to warn a man named Dodge that fellow deputies Stinson and Forbes, along with a man named Haze Lyons, intended to rob him on a planned trip to Fort Benton. When the would-be robbers heard of the warning, they shot Dillingham down in Virginia City, Montana, on June 26, 1863. Though the killers were arrested and tried in a miners’ court, with several witnesses to the murder, they were acquitted. This incident was just one of many that prompted the organization of the Montana Vigilantes in late 1863. 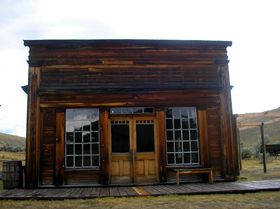 After capturing and hanging alleged road agent Erastus “Red” Yager on January 4, 1864, the Montana Vigilantes claimed that Yager had named Henry Plummer as the leader of the gang called the Innocents. The vigilantes acted swiftly, and on January 10, 1864, they rode into Bannack from Virginia City and apprehended Henry Plummer and his two deputies, Buck Stinson and Ned Ray. Marching the three men to the gallows in a military style, the three were lifted up and dropped to their deaths. The three bodies were left hanging until the following day. Plummer’s was the only body placed in a wooden coffin, and none were buried in the cemetery; but instead, all three were buried in shallow graves in Hangman’s Gulch about a hundred yards up from the gallows.