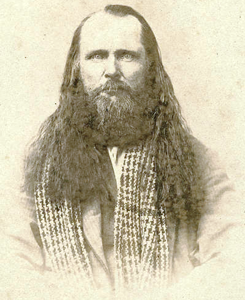 Mormon Church founder Joseph Smith, Jr‘s personal bodyguard, Orrin Porter Rockwell would be known for his loyalty and generosity, as much as his tenacity and ruthlessness as a lawman in Utah.

Because he didn’t keep a diary, Porter Rockwell’s story is blurry. Conflicting information put his birth as either June 28, 1813, or June 25, 1815, but we know for sure that as a young man he became personal friends of the slightly older Joseph Smith. His parents were neighbors of the Smith Family in Massachusetts, and when Smith needed funds to publish The Book of Mormon, Rockwell sold berries and wood to help out.

Following Smith to New York, the Rockwell family would become some of the earliest members of the Latter Day Saint movement, with Porter being baptized in the church on the day it was founded in April of 1830. At 16, he was the youngest member.

After the New York branch of the church relocated to Ohio, Porter was sent on to Jackson County, Missouri, the intended central gathering place for church members. It was in Missouri that Porter would become proficient with a gun, and would marry his first wife in 1832. It would also be in Missouri that Porter would be a suspect in the assignation attempt against former Governor Lilburn Boggs.

On October 27, 1838, Governor Boggs issued Executive Order 44, known as the “Extermination Order”, which evicted Mormons from Missouri by any means possible, including violence. Boggs’ order was in response to what he called “open and avowed defiance of the laws” during the conflict between Mormons and their neighbors known as the Missouri Mormon War. The church members were not welcome in the state. Tensions had been rising due to the economic and electoral growth of the church community, along with Joseph Smith’s opposition to slavery. Newspaper articles out of Independence, Missouri in 1833 culminated with Missouri public officials publishing a manifesto that July which said in part:

“We, the undersigned, citizens Jackson County, believing that an important crisis is at hand, as regards our civil society, in consequence, a pretended religious sect of people that have settled, and are still settling in our County, styling themselves Mormons; and intending, as we do, to rid our society, “peaceably if we can, forcibly if we must,” and believing as we do, that the arm of the civil law does not afford us a guarantee, or at least a sufficient one against the evils which are now inflicted upon us, and seem to be increasing, by the said religious sect, deem it expedient, and of the highest importance, to form ourselves into a company for the better and easier accomplishment of our purpose — a purpose which we deem it almost superfluous to say, is justified as well by the law of nature, as by the law of self-preservation.”

Church Elders would often meet at Porter’s home to discuss ways of protecting members from the Missouri mobs who were persecuting them. But it would be of no use, as they were eventually driven out of Jackson County, forced to relocate to Illinois. Porter remained in Missouri, according to the church, to ensure the safe passage other Latter Day Saints out of the state. In May of 1842,  now former Governor Lilburn Boggs was shot by an unknown assailant.  The crime was quickly pinned on Porter Rockwell as revenge for the Executive Order a few years before. Porter would spend eight months in Jail awaiting trial but was acquitted due to lack of evidence.

After his release, Porter made his way to Nauvoo, Illinois to join the rest of the church. Arriving Christmas Day, 1843, to Joseph Smith’s home unannounced, hair long past his shoulders, Smith at first mistook him for a drunken Missourian and was ordering his removal before realizing it was his friend.  According to the church, it was on this occasion that church leader Smith promised Porter that if he remained faithful to the church and did not cut his hair, he would never suffer death from a bullet. It is said that Porter, from that day forward, wore his long hair braided and tucked into a bob at the back of his neck, although another account from the church says that later he would cut his hair in order to help a widow who was balding from typhoid fever.

Following the assassination of Joseph Smith in June of 1844, Porter is alleged to have shot and killed Frank Worrell, leader of the group of men responsible for Smith’s death, in September of 1845. The church contends it was self-defense, and some add it was on orders of the new Saints leader, Brigham Young, to shift away persecution from those still in Nauvoo to himself. Rockwell was acquitted that next spring.

Porter followed Brigham Young to Utah, and in 1849 was appointed Deputy Marshall of Great Salt Lake City. During his time in law enforcement, he was said to be relentless. Describing the changes in life over 20 years at Salt Lake City, an article in the Reno Evening Gazette in February of 1891, while referencing the conflict between prospectors and the church, said:

“The prospectors made their headquarters principally at a hotel kept by Gentiles, who, like all other newcomers, were regarded as intruders and trespassers, and were watched like thieves in every move they made, by the Mormon spies and church hirelings. Then it was that Porter Rockwell, with his long, wild locks flowing over his shoulders, and his running mate, Brig Hampton; bore the reputation of being the two leading destroying angels of the Mormon Church.” 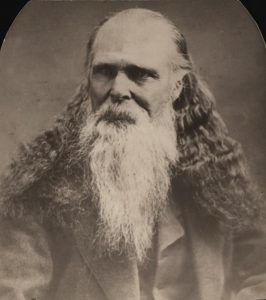 While it is believed he killed many men as a gunfighter, religious enforcer, and Deputy Marshal, Rockwell told a crowd in 1869, “I never killed anyone who didn’t need killing”. However, many considered him an outlaw, suspecting him in the murders of several in service to the church. This included ‘Aiken affair’, an incident involving six professional gamblers from California who would be murdered, allegedly by Rockwell, while being escorted out of Utah Territory in 1857. Rockwell would be indicted for the incident some 20 years later but died before his trial.

Porter is not only remembered as a lawman though. He also was a noted guide and mountain man, and at one time operated the Hot Springs Hotel and Brewery in southern Salt Lake Valley. Author Fitz Hugh Ludlow would write in 1870 about Porter Rockwell, saying:

“But he was that most terrible instrument that can be handled by fanaticism; a powerful physical nature welded to a mind of very narrow perceptions, intense convictions, and changeless tenacity. In his build he was a gladiator; in his humor a Yankee lumberman; in his memory a Bourbon; in his vengeance an Indian. A strange mixture, only to be found on the American Continent.”

Rockwell died of natural causes on June 9, 1878, and is buried in the Salt Lake City Cemetery. At his funeral, future church leader Joseph F. Smith said,  “They say he was a murderer; if he was he was the friend of Joseph Smith and Brigham Young, and he was faithful to them, and to his covenants, and he has gone to Heaven and apostates can go to Hell…”