In the mid-1850s a European tourist recorded her activities and reputation. 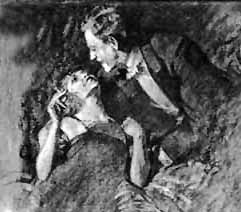 “The conversation of these bravos drew my attention to a female character of the Texas frontier life, and, on inquiry, I heard the following particulars. They were speaking of a North American amazon, a perfect female desperado, who from inclination has chosen for her residence the wild border-country on the Rio Grande. She can handle a revolver and bowie-knife like the most reckless and skillful man; she appears at dances (fandangos) thus armed, and has even shot several men at merry-makings. She carries on the trade of a cattle-dealer, and common carrier. She drives wild horses from the prairie to market, and takes her oxen-wagon, along through the ill-reputed country between Corpus Christi and the Rio Grande.”

About 1855, Sally married husband #4, Isaiah Wadkins, but left him after only five months because, according to court records, he beat and dragged her nearly 200 yards. He must’ve been pretty darned strong, or else maybe he had her tied to the leg of a horse. The records don’t say. Sally also proved he was actually living with a woman named Juanita. Her divorce was granted on the grounds of cruelty and adultery. 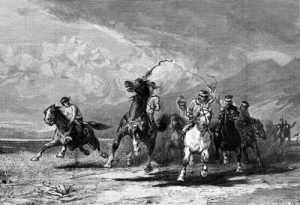 Some of her neighbors suspected that she was (gasp) a horse thief, and did the dastardly deed of stealing stock from her friends. Her method allegedly began with a friendly visit and, while Sally talked amiably with her host, her vaqueros were casing the ranch, cutting barbed wire and running the neighbor’s horses off. Indians took the fall for this treachery. Some even said bands of Comanche were on Sally’s payroll, so she got the stolen horses every which way she could, and they were promptly given her Bow and Arrow brand, though some sources have her brand as Circle S. It was also said that her brands might not stand close inspection. However, entered in the Records of Marks and Brands of DeWitt’s Colony at Gonzales on September 25, 1833, we find the following:

Sarah Newman wife of Jesse Robinson requests to have her stock mark and brand recorded which she says is as follows, Ear mark a swallowfork in the left and an underslope in the right and her brand the letters, J N which she declares to be her true mark and brand and that she hath no other. Sarah (herXmark) Newman [Records of Marks and Brands in the District of Gonzales for 1829, DeWitt’s Colony” (County Clerk’s Office). Gonzales, Texas, p. 51.]

(The instrument makes clear that the brand is hers and appears on her livestock. Since her father died only two-and-a-half years before that time, it is obvious that the brand, her father’s initials, as well as the cattle which bore it, was hers by inheritance).

Sally began to make the dangerous journey across the border into Mexico for horses. Usually alone, carrying large sums of gold in a nosebag hanging over her saddle horn, she bought herds of wild mustangs, which she frequently sold in New Orleans.

Most women would not have dared to do anything so fraught with peril, but Sally was not most women. She encountered a problem only once, in the territory of Cortina, when a bandit and self-proclaimed governor jailed her for a few days. Sally seemed to regard it as a sort of vacation and just sat and waited for her vaqueros to arrive.

When the Civil War broke out, Sally saw a surefire way to make even more money: Texas cotton, sorely needed by European manufacturers, through Mexico to Europe and, on the way back, arms and other military supplies from Europe through Mexico to the south by rail. The Camino Real north from Matamoros to Alleyton where the Houston railroad line ended, formed what became known as The Cotton Road. Banquete was the midway point.

When Sally was traversing The Cotton Road with her teamsters, her favorite outfit was a buckskin shirt, jacket and chibarros, long rawhide or coarse cotton bloomers tied at the ankles with drawstrings. During winter, she often wore chibarros of bright red flannel. Her grandchildren later remembered that she sometimes “sported a fancy wrap-around riding skirt. Her two ever-present French pistols were always hidden in her skirt when she wasn’t sporting her holstered six-shooters.”

Unlike Lottie Deno, Sally was no fashion figure. Old newspapers report her as dressing solely in rawhide bloomers, making it easier for her to ride astride Redbuck, like a man. Others say she rode sidesaddle and wore a long skirt or dress and a bonnet. John Warren Hunter wrote “I met Sally at Rancho Las Animas near Brownsville … Superbly mounted, wearing a black dress and sunbonnet, sitting as erect as a cavalry officer, with a six-shooter hanging at her belt, complexion once fair but now swarthy from exposure to the sun and weather, with steel-blue eyes that seemed to penetrate the innermost recesses of the soul — this in brief is a hasty outline of my visitor — Sally Skull!” 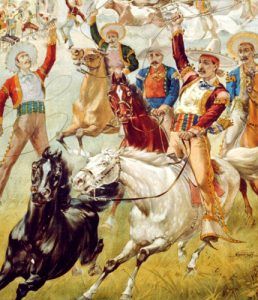 Sally spoke fluent Spanish, had a fondness for Mexicans, and hired them to work in her business of freighting cotton by wagon train to Mexico in exchange for guns, ammunition, medicines, coffee, shoes, clothing, and other goods vital to the Confederacy. She had a reputation of ruthlessness and of ruling the armed trail hands with the crack of her whip, fueled by a hasty and nasty temper. Nonetheless, the trail hands (teamsters) developed a healthy respect for such a woman who knew so many cuss words, the type of words that would “scald the hide off a dog.” They were also impressed with her prowess with pistols. Her expert cussing also impressed a preacher Sally met on the trail.

Sally was hauling freight to Mexico when she came upon the preacher who had inadvertently mired himself and his two-horse buggy down in the muddy road. All he could do was shake the lines up and down on the horses’ backs, to no avail. They refused to pull. Suddenly Sally rode forward and yelled loudly as only she could, “Get the hell out of there you sons of bitches!!! Get the hell out!!!” whereupon the horses bolted, freeing themselves, the buggy and the preacher. They were seen running on down the road. The preacher managed to get himself and the buggy entrapped in the muck a second time, ran back to get Sally, and said, “Lady, will you please come and speak to my horses again?”

Sally’s magnificent Spanish pony named Redbuck, was almost as famous as she was. Gifted with legendary endurance, a necessary quality for a horse who wanted to please his tempestuous owner, Redbuck was blanketed in bright colors and ridden under a fine Mexican silver-trimmed saddle. Sally failed to understand that she had passed on her affection for Redbuck to her daughter, who felt the same way about a pet dog. Nancy had been sent off to New Orleans to become a lady, and it was said that Nancy became so refined that she valued her dog above people. One day when Sally was visiting, she became enraged when the dog tried to bite her, drew her gun and blew him to smithereens. Nancy never spoke to her mother again.

Sally was at her “peak of notoriety” when she met and married husband #5, a man half her age named Christoph Hordsdorff, nicknamed “Horse Trough.” One old-timer who knew 21-year-old Horse Trough described him as being “… not much good, mostly just stood around.”

As the story goes, Horse Trough and Sally rode out of town together one day. Only one rode back.

Horse Trough returned alone to Banquete. “She simply disappeared,” was all he said, which probably aroused more gossip than if he had admitted outright that he plugged her. Speculation abounded that he “blew off the top of her head with a shotgun” for the gold in her saddlebag. Let’s face it though, if he was 21 to her 43, and good-looking enough to just have to “stand around,” chances are she would’ve willingly handed the gold over.

A drifter later reported that as he was traveling over the prairie, he came across the body of a woman buried in a shallow grave. He first spotted it when he saw a boot sticking out of the ground, with only circling buzzards marking the spot. There was no evidence that the boot was on a foot connected to the body of Sally Skull. Presumably, Horse Trough inherited her entire estate.

What if he didn’t do old Sally in after all? Records indicate that she faced perjury charges and was defendant in a lawsuit brought by Jose Maria Garcia. Even though the San Patricio County Courthouse burned down and official reports on the case were lost forever, one form relating to the lawsuit survived. Written across the bottom was the mysterious notation “death of Defendant suggested.”
The infamous Sally Skull was portrayed in the 1989 mini-series, “Lonesome Dove” by O-Lan Jones.

In 1964 a historical marker in her honor was erected two miles north of Refugio, Texas, at the intersection of U.S. Highway 138 and State Highway 202. It reads:

Woman rancher, horse trader, champion “Cusser.” Ranched NW of here. In Civil War Texas, Sally Scull (or Skull) freight wagons took cotton to Mexico to swap for guns, ammunition, medicines, coffee, shoes, clothing and other goods vital to the Confederacy. Dressed in trousers, Mrs. Scull bossed armed employees. Was sure shot with the rifle, carried on her saddle or the two pistols strapped to her waist. Of good family, she had children cared for in New Orleans school. Often visited them. Loved dancing. Yet during the war, did extremely hazardous “man’s work.”

About the Author: Maggie Van Ostrand’s articles have appeared in the Chicago Tribune, the Boston Globe, various magazines; monthly in the Mexican publication, El Ojo Del Lago and mexconnect.com, and numerous contributions to Texas Escapes Online Magazine, from which this article was provided.