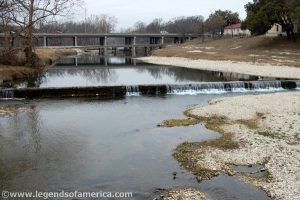 Long before the village of Salado, Texas was ever formed, the area had long been known to Native Americans for Salado Creek and the multiple springs in the area. It was first called Salado Springs by the Tawakoni Indians, who formed a settlement here long ago. In their language, the term “Salado” meant “salty.” Evidence shows that even before the Tawakoni were here, Paleo-Indian tribes were also known to utilize the waters of the area for thousands of years. In 1732, Spanish explorer, soldier, and governor of Spanish Texas, Juan Antonio Bustillo y Ceballos is thought to have visited the springs as he traveled westward through the region.

The first white settler in the area was Archibald Willingham, who was one of the original Texas colonists of Stephen F. Austin in 1839. In 1848, his eldest son, Francis Marion Willingham, traveled to the area and purchased 320 acres of land on Salado Creek on behalf of his father.

Two years later, in 1850, Archibald and two of his sons settled on the land, building two log cabins with a covered passage between the two homes. It stood about a hundred yards west of where the Stagecoach Inn would later be built.

As more people moved to the area, the settlement gained a post office in 1852 and became a stage stop along the overland mail route between Austin and Waco. Carrying passengers as well as the mail, the community was visited by the likes of Sam Houston, Robert E. Lee, and Shanghai Pierce. A military road followed the stage road in 1859, bringing yet more people to the area.

The same year, in October, a local landowner, Colonel Sterling C. Robertson, who supported the building of a college in the area, donated 10 acres for the educational institution, as well as an additional 90 acres to form an “official” townsite. Divided into lots, they were sold for $5 each, with the intention that the lot sales would provide the funds for the college building. Though the lots sold rather slowly, the plans for the college continued. The first classes for Salado College were held in a temporary wooden building on February 20, 1860, with Levi Tenney serving as the first Principal. It was the first college in the state to operate without church or state funds and unlike most colleges of the time, it was co-educational. The college would attract the best students from throughout the state and 75 students were enrolled the first term. On July 4, 1860, area Masons laid the cornerstone for the college’s permanent two-story limestone building. The next year, attendance increased to 124 students. The college stressed fine arts, humanities, and emphasized Greek and Latin, along with advanced mathematics and literature. This high level of education brought prestige and respect to the burgeoning city of Salado.

In 1861, the Shady Villa Hotel was opened by Thomas Jefferson Eubanks, who had bought 2 ½ tracts of land from the townsite company in December 1859. The hotel served as a stage stop and attracted numerous people throughout the years, including such names as General George Armstrong Custer, Robert E. Lee, Sam Houston, and outlaws such as the James Brothers and Sam Bass.  Now known as the Stagecoach Inn, the old hotel continues to serve customers as a dining room today. It is the longest, continuously operating inn in the state.

The same year that the historic inn opened, also saw the nation become embroiled in the Civil War, ending the town’s growth during the period. Many of the men in the area quickly joined the Confederate forces and went off to war, including a company called the “Salado Mounted Troops.”

Those who survived the war returned to find their farms in poor shape, but they began the process of rebuilding. Others, who had owned businesses, restored and expanded them and the community began to grow again. As the town began to thrive, eleven mills were built along Salado Creek. Of those, only Stinnett’s Mill remains, now serving as a private residence. 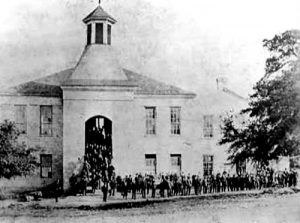 In 1866, Salado became part of the busy Chisholm Trail as thousands of head of cattle began to run right down Main Street, making their way to Kansas. The cattle would continue to be driven through the area for almost two decades, bringing with them several desperados including the infamous Sam Bass.

In 1867, Salado was incorporated, primarily to raise funds to build a bridge across Salado Creek. Though a bridge was built, this formal organization did not continue for long and no records were kept to document its officers. It would be more than 130 years before the city would be formally organized again.

With attendance at Salado College sometimes topping 300 students, a two-story annex was added to the school in 1871. From 1866 to 1872, the average number of students was 250.

Following the Panic of 1873, fraternal organizations called the Grange, popped up all through the farm belt, to protect the interests of those involved in agriculture who were plagued by low prices for their products, growing indebtedness, and discriminatory treatment by the railroads. The first Grange in Texas was formed at Salado that same year, meeting in a two-story building just across from the Salado College Campus. Even after other Grange organizations began to dwindle, the Salado Grange continued strong until the late 1880s. The building where they met now houses the Central Texas Area Museum.

The financial Panic of 1873 also had an impact on Salado College and enrollment dropped sharply. By this time, there were also more state-funded colleges and soon the college almost found itself in foreclosure, until Colonel Sterling C. Robertson stepped in and saved it. Unfortunately, he died in 1879 and the following year, in February, the school’s charter expired. A new corporation then purchased the college, which continued to operate for the next few years. However, it was not re-chartered, so no degrees were granted between 1880 and 1884. Finally, it ceased operations as a college in 1885. For 25 years, it had operated without endowments, sustained solely by tuition. For the next five years, the buildings were utilized by the Salado Public Schools. 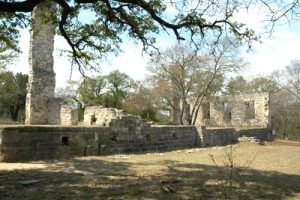 By the early 1880s, Salado boasted of seven churches, 14 stores, two hotels, two blacksmiths, three cotton gins, and almost 1,000 people. However, when the Gulf, Colorado & Santa Fe Railroad reached Temple in 1880 and the Missouri, Kansas & Texas Railroad reached Belton, much of the population moved closer to the railheads and Salado began to decline.

In 1890, the old Salado College site became the Thomas Arnold High School, a private institution run by Dr. Samuel Jackson Jones who had previously been associated with Salado College.  Named for Thomas Arnold, noted headmaster of Rugby School in England, Dr. Jackson, along with his wife Charlotte, provided quality education during a time when there were few public high schools. One of the high school’s first students went on to become the first female governor of Texas, Miriam Amanda Wallace “Ma” Ferguson.

Unfortunately, the buildings were damaged by fires in 1901 and 1902 but were repaired and rebuilt each time. It continued as a private high school until 1913, at which time, it once again served as Salado College until 1919. When the college closed for its final time, the site was again given over to the Salado public school system. However, when it burned again in 1924, the city didn’t have the funds to rebuild and its ruins were abandoned. By that time, the town boasted a population of only about 400 people. Locals say that the three fires at the college were “suspicious,” but, any more information regarding why has been lost in history. Many years later, the site became the subject of an archaeological survey. The ruins of the building have since been stabilized and the site is open to the public. A bronze statue of the school’s benefactor, Colonel Robertson, stands at the site

Still, there were enough children in the area that the town still needed a school. Thanks to the kindness of William K. Hamblen, a site was provided, the cornerstone of which was laid on September 20, 1924. The building continued to be used for a school for several decades, before it, too, closed. In 1993; however, the red brick building was renovated and now serves as a community center. 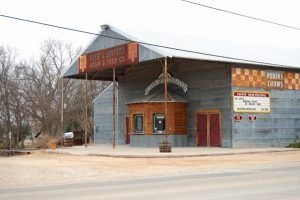 The Silver Spur Theater in an old grain and storage building, features films from the early years of the movie industry in addition to live Vaudeville performances.

In the 1920s and ’30s, the town continued to survive, but, supported only about 200 people, close to becoming a ghost town. However, in 1945, the old Shady Villa Hotel was purchased by Dion and Ruth Van Bibber, who renovated it and re-opened it as the Stagecoach Inn. The fine food and quality service soon garnered numerous visitors to the small town. Later, a modern hotel was added to the site, bringing yet more visitors, including Lyndon B. Johnson and his family. After a new residential development called Mill Creek Country Club, complete with a golf course, was built in 1960, more residents came to live in the area. In 1966, Salado Creek, which played a very large part in the history of the area was designated as the first Natural Landmark in Texas. Here is also Pace Park, where wagon wheel ruts can still be seen in the limestone creek bed just north of the park, leftover from when Main Street was part of the Chisholm Trail.

Over time, more and more people renovated Salado’s historic buildings and started new businesses, making the small town a mecca of antique shops, specialty stores, and historic sites today. Visitors not only enjoy the many events held throughout the year but also, the recreation at nearby Lake Belton and Hollow Lake, the Mill Creek Golf Course and Inn.

As Salado grew and changed, it drew more and more people and the area population grew from just 400 people in about 1950 to some 3,500 today. Interestingly, for more than 130 years of its history, Salado thrived without a city government. However, in 2000, the city overwhelmingly voted in favor of incorporation when faced with a looming threat of annexation by their neighbor to the north, Belton.

Today, there are 18 buildings in Salado that are listed on the National Register of Historic Places and the city has 23 Texas Historical Markers. Some 130 businesses cater to both the locals and the tourists of pretty little Salado. The city provides numerous views of historic homes, the Salado United Methodist Church, Stinnett’s Mill, Summers Mill, the Denman Log Cabin, the Salado Cemetery, ruins of the Salado College/Thomas Arnold High School, the most famed site of the city – the 1860 Stagecoach Inn, and more. 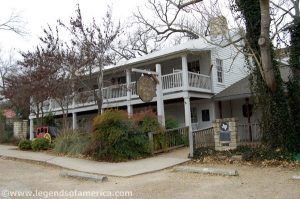 The Stagecoach Inn is the longest continuously operating inn in the State of Texas.

Salado is located just off I-35 about 18 miles south of Temple, Texas.