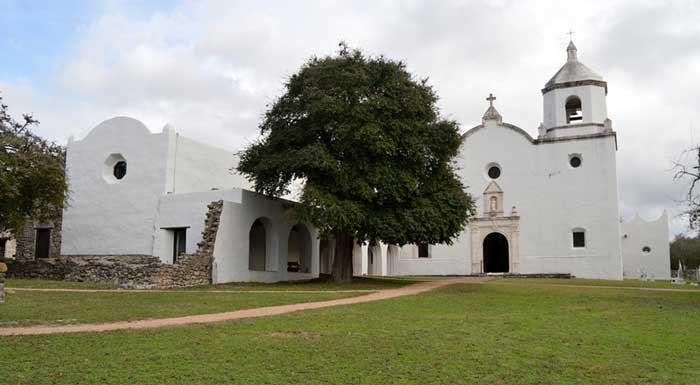 The Spanish began colonizing efforts in what is today South Texas after withdrawing to El Paso in the wake of the Pueblo Revolt of 1680 that occurred in New Mexico. Colonization of the area was politically and economically advantageous. In addition to saving souls, the missions were a way to create a supply of native labor and deter the French in Louisiana from gaining a foothold in the region.

The mission was first built on Matagorda Bay near what is today Houston, Texas. This area was once inhabited by the Karankawa Indians, who first encountered Europeans when Alvar Nunez Cabeza de Vaca and his men were shipwrecked on the Gulf Coast. A century and a half later, the French, led by Robert le Cavelier, sieur de La Salle, established the small Fort Saint Louis settlement on the coast of Matagorda Bay in 1685. However, it was abandoned after the Karankawa attacked and destroyed it around 1689.

The Spanish built an outpost on top of the ill-fated French settlement in 1718. The fort constructed there in 1722 became Presidio La Bahia, which protected the Mission Espíritu Santo de Zuniga. The purpose of the mission, along with its military fortress, was to secure the Texas coastline from the French and to Christianize the native Karankawa Indians. The Franciscan priests also tried to gather the local Coco, Copane, and Cujane Indians. Like the French settlement at Matagorda Bay, the Spanish fort and mission there did not last long, failing to grow crops and attract the local peoples to convert. 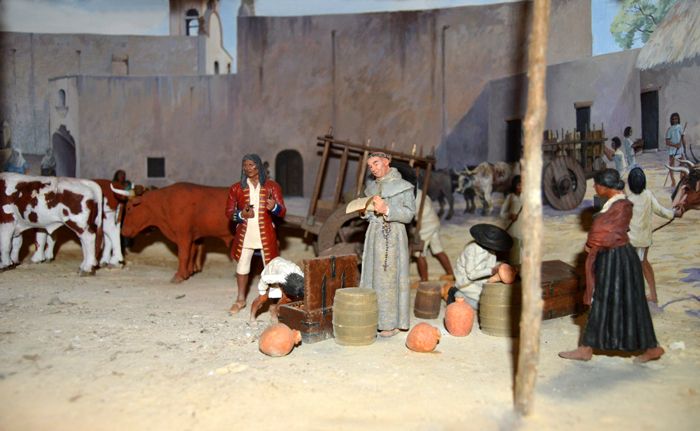 As a result, the mission was moved in 1726 near present-day Victoria, Texas, where the Tamique and Aranama peoples lived. Here, dams and stone acequias were built to carry water from the Guadalupe River to the mission and a presidio was constructed. A ranching outpost was also built of mortar and stone at Tonkawa Bank, on the river about 12 miles below the mission. Producing enough grain and hay to trade with other Spanish settlements, this site lasted for 26 years. Although prosperous, Spanish officials recommended moving the mission to secure the area between Bexar and East Texas from the encroachment of the French and English. 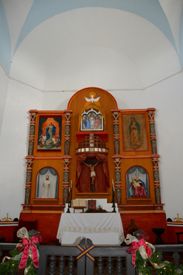 In 1749 Mission Espíritu Santo and Presidio Nuestra Señora de Loreto de Bahía were moved to what is now Goliad, Texas, one on each bank of the San Antonio River. The two settlements helped protect El Camino la Bahia, a major trade route to the north and east. The initial settlement buildings were jacals constructed of wattle-and-daub. Later more permanent stone structures were built including a convento and living area for the families at the mission, a granary, workrooms, and a forge. Construction continued until 1758.

The native people living and working at the mission were from many groups, including the Aranama, Piguique, Manos de Perro, Tamique, Tawakoni, and Tonkawa. They chose to try life at the mission because the mission and presidio provided protection from raids. Supervised by Franciscan priests, the women spun wool for clothing, made clay pots used for storage and cooking, harvested grain, fruit, and vegetables, and ground corn into meal. The men worked with cattle, farmed, and assisted with the construction of the mission and presidio. These people became adept horse riders and ranchers. Over time the mission became one of the first large cattle ranches in the region. 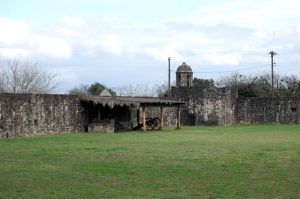 During the American Revolution, mission vaqueros herded thousands of heads of cattle to Louisiana in support of the American struggle for independence. By 1788 the mission was growing a variety of crops and had over 15,000 head of cattle. The cattle herd may have reached 40,000 at its peak, with the incorporation of herds from other missions. The mission priests armed the native peoples living at Mission Espíritu Santo to defend against raiding Lipan Apache and Comanche groups. In the 1790s, the raids became more problematic. Raiding, desertion, and disease contributed to the native population’s decline at the mission in the late 18th century.

The mission remained in service until Mexican Independence in 1821. However, two Franciscans refused to leave and remained as parish priests. By the 1830s most of the Christianized Indians had left and the mission which was facing opposition from raiding Apache and Comanche. These conditions coupled with a lack of money and political turmoil in Texas forced the mission to close in 1830. 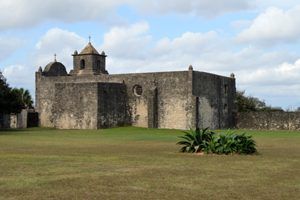 With most Indians having already left, the premium lands of the mission were acquired by the local Mexican and American colonists. The mission itself became part of the City of Goliad and the old mission’s stones were allowed to be removed and used for local construction. The city leased the site between 1848 and 1856, first for a Baptist school and then a Presbyterian school, but the building gradually fell into ruin.

The mission ruins became part of the newly created Goliad State Park in 1931. In 1933, the Civil Works Administration with funds provided by the Works Progress Administration began the reconstruction of the stone chapel and granary, which were completed in 1941. Additional construction in the 1960s and 1980s brought the mission back its 1749 appearance. During the 1970s, Texas Parks and Wildlife Department rehabilitated the chapel and built exhibits in the restored granary.

The mission was listed on the National Register of Historic Places in 1977 and is currently part of a state park operated by the Texas Parks and Wildlife Department. 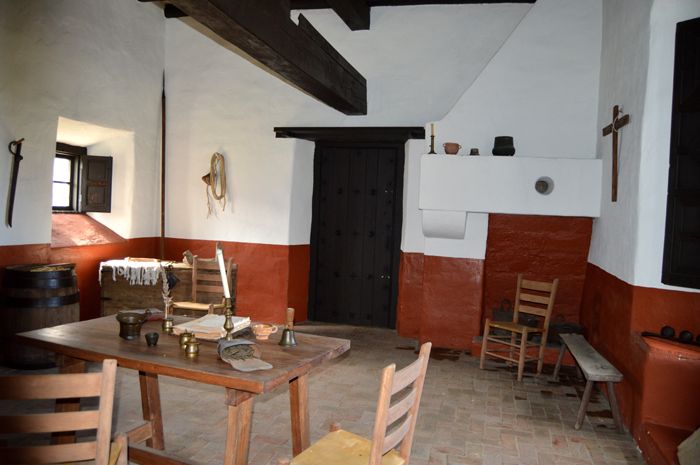 The park also contains General Ignacio Zaragoza’s Birthplace, Plaza and Amphitheater, which are located near Presidio La Bahia. General Zaragoza assumed command of the rag-tag Mexican Army and welded it into a staunch fighting force, which met and defeated the French on May 5, 1862, in the Battle of Puebla, against Napoleon III’s invading army (now celebrated as Cinco de Mayo in both the U.S. and Mexico).

Battle of Coleto and the Goliad Massacre