In February, Mexican General Jose de Urrea led a branch of the Mexican army up the Gulf Coast of Mexican Texas toward Goliad, where a large contingent of soldiers from the Texian Army were garrisoned under Colonel James W. Fannin.

Simultaneously, Mexican president Antonio Lopez de Santa Anna led a larger force into the Texas interior, where on March 6th, his troops won the Battle of the Alamo.

After word spread that the Alamo had fallen, Texas Commander Samuel Houston, fearing another disaster could befall the Texian Army, ordered Colonel James Fannin to destroy Presidio La Bahia and retreat to Victoria, Texas some 30 miles to the northeast. Fannin and his men had been fortifying the presidio, which Fannin called Fort Defiance, from possible Mexican attack.

Fannin received the orders on March 14, 1836, which stated “The immediate advance of the enemy may be confidently expected. Prompt movements are therefore highly important. But, for whatever reasons, he failed to immediately act. Whether indecisive, stubborn or loyal to the soldiers away on missions whom he did not want to abandon, Fannin remained in Goliad until the morning of March 19th.

Finally, Fannin led his some 400 men away from Goliad, transporting nine cannon, more than 500 spare muskets, and loads of heavy supplies and baggage. But, it would be too late for he and his troops. Urrea’s advance riders had already spotted the Texan troops and the main army was just about two hours behind.

After the column had traveled about nine miles Fannin ordered a halt to rest the animals. At about 3:00 p.m., the Mexican cavalry appeared and the Texans strove to reach a grove of timber some 400 yards away. But, as the Mexican force grew closer, the withdrawing Texas contingent formed a defensive square with their wagons and placed their cannons in each corner.

General Urrea’s forces then attacked. Bitter fighting immediately ensued as Fannin’s volunteers hurled back the assaults of the Mexican force. Although Mexican troops launched three separate attacks against the square, they could not penetrate the Texian position. However, as night fell, Mexican sharpshooters were able to wound and kill many of the Texians, whose view of the Mexicans was impaired due to the high grass of the prairie. After a fierce battle, the Mexicans suffered about 100 to 200 killed and wounded while the Texian losses were seven to nine killed and 60 wounded, one of whom was Colonel Fannin.

On the following day, faced with several times their number, Fannin and his officers drafted terms of surrender, which included statements that the Texian wounded would be treated, that they would all gain the protection expected as prisoners of war, and that they would be paroled to the United States of America.

However, Santa Anna had stated earlier that any Texians could only be allowed to surrender unconditionally, so Urrea could not guarantee that the terms would be followed by Santa Anna, but stated that he would talk to Santa Anna on behalf of the terms of surrender presented by the Texians. As a result of the signing, the battle of Coleto ended. 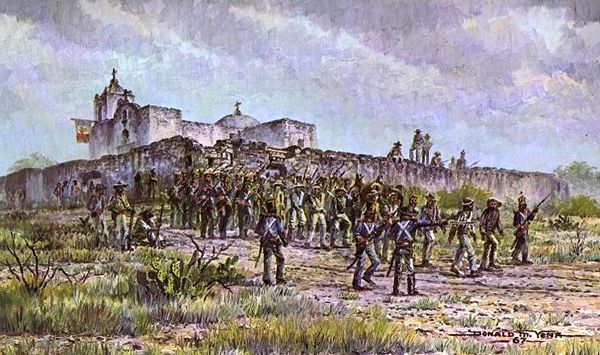 After the surrender, those Texians that could walk were sent to Goliad under Mexican escort. Those that were wounded were transported. Fannin arrived in Goliad on March 22nd. In the meantime, General Urrea moved onto Victoria, where he wrote a letter to Santa Anna recommending that the Texian prisoners should be treated with clemency. However, Santa Anna did not agree, as he had received authorization from the Mexican Congress to treat all captured Texian troops as pirates rather than prisoners-of-war. Once the Texian troops had all arrived in Goliad, Santa Anna ordered the Mexican commander Jose Nicolas de la Portilla to execute the prisoners.

The Mexicans spared 20 physicians, orderlies and interpreters, and another 28 prisoners were able to escape. Then, on Palm Sunday, March 27, 1836, Fannin and about 340 other Texian prisoners were divided into four groups. While the sick and wounded remained in the chapel, the other three groups were escorted on different roads out of town and when each group was about a half-mile from the fort, the Mexican guards opened fire. Then the Mexicans executed the wounded who were held in the chapel. The last soldier to die was the injured Colonel James Fannin. His three dying wishes were to be shot in the chest, given a Christian burial and have his watch sent to his family. Instead, the Mexican commanding officer shot Fannin in the face, burned his body with the others and kept the timepiece as a war prize. 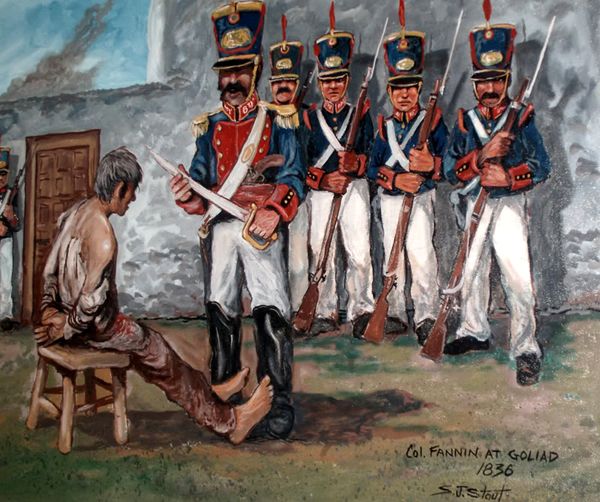 Deemed a massacre, the execution of Fannin’s command served to inflame the Texas cause, and when Texian forces attacked Santa Anna’s command on April 21, 1836, the battle cry rang out “Remember the Alamo! Remember Goliad!”

A few months after the Battle of San Jacinto, Republic of Texas Army General Thomas Rusk was escorting the remnants of the Mexican Army on their retreat back to Mexico. When he came through Goliad, Rusk discovered the remains of Fannin’s men in the trenches where they had been burned and on the ground where they had been scattered by animals. Rusk immediately ordered that the remains be collected and given a proper military funeral. Fannin and his men were buried with full honors in a mass grave on June 4, 1836. 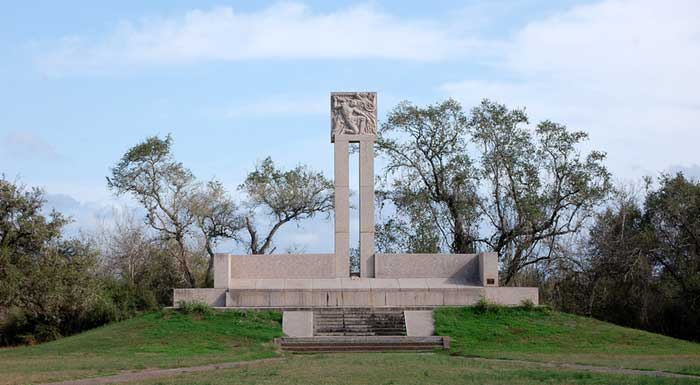 This mass grave of Texas heroes remained unmarked for decades and was almost lost to history. Over the years, charred bone fragments and other bits of human remains would be unearthed near the site. In 1928 two acres where these remains were often found was purchased and given to the City of Goliad. A subsequent archaeological investigation confirmed that this was the site of the mass grave for Fannin’s army. In 1936 the state of Texas appropriated money for this grand monument, which was dedicated in 1938. Today it is a popular pilgrimage site for everyone interested in the Republic of Texas and the Texas War of Independence.