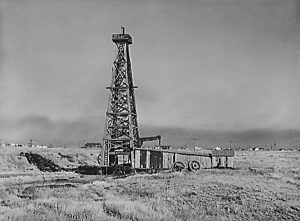 Signal Hill – A small oil boom camp located about four miles east of Stinnett, this town was founded in 1926 by Earl Thompson, of Amarillo, on a tentative survey of the Panhandle and Santa Fe Railway.

Shortly before founding the town, Earl Thompson had visited some friends in California who lived in a mansion near Long Beach in a section called Signal Hill. When he returned to Texas, he dreamed of establishing a similar community for the new oil-rich Texans of the area to build their mansions. Joining with Thompson were W. P. Sullivan and C. D. Armstrong. The trio set out to find a similar hill in Hutchinson County, finding the perfect location about four miles east of Stinnett. They purchased a quarter section of land and began platting a new townsite which they named Signal Hill after the one in California. However, they made a huge mistake in platting the lots just 25 feet wide by 80 feet deep. The width of these lots would obviously not support a mansion.

Though the size of the lots appears to have been poor planning on their part, the lots did come with several helpful selling points. First, the lots came with mineral rights; second, they could be purchased for just $100 down and $25 per month for a year; and third, buyers could finance their building supplies from Earl Thompson’s lumber yard for a third down and the balance over the rest of the year. Mr. Armstrong began selling lots on Friday, May 14, 1926, while the surveyors were still driving marker stakes for the townsite. By nightfall, several tents and a few partially finished shacks dotted the grassy hillside. The town grew quickly; but, there were no mansion builders. Evidently, the oil-rich men preferred to live in Borger, Amarillo, area ranches, or in many cases, not even in the state of Texas. A post office was established on December 4, 1926, with Benjamin W. Brown as the first postmaster. And by the end of the year, the population had reached nearly 10,000 people and numerous business lined Signal Hill’s Main Street. These included four drug stores, a movie house, a dozen or so filling stations, several hotels and rooming houses, an automobile dealer, oil well supply houses, welding shops, a boiler factory, and the only bakery and ice house in Hutchinson County. A hospital and a newspaper building were in the planning. However, of these more than 50 businesses, all but a two-story brick bank building were wooden frame structures or hastily erected tent structures. 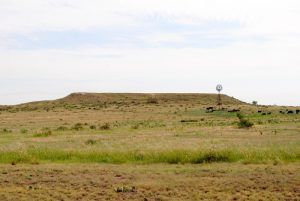 As quick as the town began, it already started to die. Town developers never planned for a school or a church. Even the bank building, which was built by townsite developer Earl Thompson, was never opened. Its only use was as an office of the Signal Hill Town Company. The promised water and sewer system never came and the town soon filled with the many criminal elements that were so prominent in the oil boom panhandle. Painted ladies plied their trade at the hotels and rooming houses. It was said that every business in town, with the exception of the post office, sold beer and whiskey.

When the railroad was routed through Stinnett, the folks of Stinnett, built a fence between itself and Signal Hill and armed guards patrolled it to stop anyone from Signal from entering what they saw as a far better city. As law enforcement, at the time, was far more involved in the wickedness in Borger, and were thought to have been corrupt anyway, they ignored the feud between Stinnett and Signal Hill. People began to carry guns on both sides of the fence, and the legitimate residents of Signal Hill fled. The post office closed on September 30, 1927, at which time the mail was routed to Stinnett. By that time, the population had fallen to just about 300 people.

Most of the people that were left in Signal Hill were criminals who had fled from Borger, as the Texas Rangers had taken control of the larger city. Some of these shade characters included such folks as Ray Terrill, Mat Kimes, Whitey Walker, Blackie Thompson, Ace Pendleton, who spent their time planning bank robberies in Texas, Oklahoma and New Mexico, and were known to make night raids on drilling crews, robbing them of anything of value. However by 1928, the authorities were beginning to get control of the criminal element in Hutchinson County, and by the end of the year, most of the outlaws had been arrested or fled. By the end of the year, there were only two residents left — a town watchman hired by town developer Earl  Thompson, and gas station operator. Before, long, they were also gone. For the next several years, the buildings were moved or dismantled for the lumber, leaving only the brick bank building. However, in 1934, it too, was razed and its bricks salvaged.

To access the old townsite, take Broadway Street east out of Stinnett about three miles, cross the now dry Cottonwood Creek. About half a mile on the east is a seldom-used dirt road that turns left towards a flat-topped mesa. It was here that Signal Hill once stood. There is absolutely nothing left today.

Skiatex Camp – One of the first major camps, this site was located on Dixon Creek about three miles east of Borger. Built by Jake Phillips in 1925, it was one of the first camps where wooden structures replaced tents. It was also one of the few camps that had a dependable water supply.

Stekoll Camp – A small camp once located Northeast of Borger.

Sunset Heights – An oilfield camp of approximately 50 homes built in the late 1940s. It was inhabited by Phillips Petroleum Company employees until the 1980’s when the camp was closed and the buildings sold or razed.

Texroy – A small oilfield community located five miles southeast of Borger in southern Hutchinson County, it was established in the late 1920s during the height of the oil boom. It was named for S. D. “Tex” McIlroy, founder of the Dixon Creek Oil and Refinery Company. The Texroy community reportedly had a population of 50 people in 1948 and was on a mail route from White Deer. It was eventually absorbed by Borger.

Whittenburg – Located in southern Hutchinson County one mile northeast of Borger, the town was founded in 1926 by rancher James A. Whittenburg to cash in on the impending oil boom. It was meant to house employees of the Phillips Petroleum Company, which began constructing its first Panhandle plant nearby — the Alamo Refinery. As the boom increased, shanties and overcrowded rooming houses were soon replaced by more permanent houses and businesses. A post office was established on May 19, 1926, churches were founded, and a school system was organized. The post office was short lived. On April 14, 1927, it was discontinued and the mail then routed to Borger. By 1936 Whittenburg reported a population of 200. In the meantime, the neighboring community of Pantex, which had a modern hospital facility and for a brief time its own post office, reported a population of fifty. In 1938 the two townsites voted to merge under the name of Phillips.