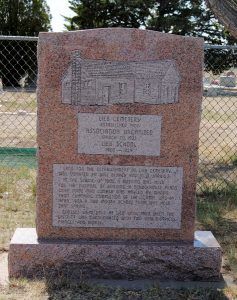 Lieb – Though the “town” of Lieb appears on historic Hutchinson County maps, the “Lieb Community” wasn’t actually a “town” in the sense of modern day understanding. Rather, it was a group of area ranchers and farmers who called themselves a “community”. The area was named for W.M. Lieb, who immigrated from Germany when he was just a boy, settling in Galveston with his family. When he was about 15 years old, he made his way north, working as a cowboy. Along the way, he married and eventually settled in Hutchinson County in 1899. Lieb first built a half dugout home for his family. Later, the dugout was replaced with a three-room structure, built with lumber hauled from Channing, located some 70 miles to the southwest of Lieb and Pringle. The Lieb children first attended school in Zulu, a stage stop and trading post situated in Hansford County, about 11 miles to the north.

Soon more people moved into the area and the “Lieb Community” began to organize. Land for the establishment of Lieb Cemetery was donated by Will Blakey and W.O. Jarvis in the spring of 1902. The first person buried in the cemetery was 24-year-old Frank L. Fox, who was killed by lightning in August 1902. That same year, the community gained its own post office on October 6, 1902, which was first housed in the home of the Tompkins family, with George W Tompkins serving as postmaster.

Area residents also wanted to build their own school and soon after the cemetery was established, they held a meeting in the Lieb home to make plans. The school would be built next to the cemetery. The men joined together and took their teams and wagons to Channing to get lumber and supplies to build the school, which was completed in April 1903. A two-month school term was held that spring with the first teacher being Birdie Hendrick, who boarded at the Tompkins’ home.

The school also served as a non-denominational church and community building. At the first church gathering, the building was named for W.M. Lieb as he had been in the area the longest. Most students who attended walked about two miles in all weather conditions to attend school. The social epicenter for the “Lieb Community”, numerous events and social gatherings were held in the building, such as parties, dances, literary meets, and baseball games on the school grounds.

Lieb’s post office was discontinued on October 31, 1921, and the mail was then sent to Spearman. Classes were held at the Lieb School continued until 1929 when the district was consolidated with two new districts in Pringle and Morse. The building continued to stand for decades until it finally deteriorated and collapsed. Of Lieb, the only thing left today is the cemetery. 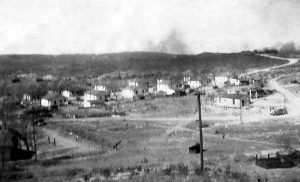 Morse Junction – A railroad station, this place was located in northern Hutchinson County at the junction of two tracks of the Burlington Northern Santa Fe Railroad. It was situated north of Route 281 and west of State Highway 136. 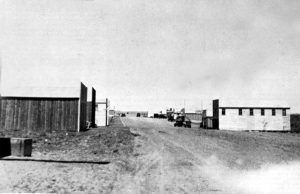 Oil City – Situated on Big Creek in southwestern Hutchinson County, this place was first known as Ingerton when a rural school was here, located on the Henry Yake ranch. During the Panhandle oil boom of the 1920s, a small camp called Oil City sprang up and grew as a stop on the Chicago, Rock Island and Gulf Railroad line between Stinnett and Fritch. In addition to a depot, a new school was built, and in 1927 a post office was established on April 12th with Miram K. Reck as the first postmaster.

The Oil City boom days, however, were short-lived and the post office was discontinued just two years later on December 31, 1929. Mail was then routed to Stinnett. However, its school remained active until 1949, when the Ingerton district was consolidated with the s. By 1940 Oil City had only one business and a population of 25. Though very small, it managed to survive until the Rock Island Railroad abandoned its line between Amarillo and Stinnett in 1972. The growth of nearby towns, along with the advent of the Lake Meredith National Recreation Area, also figured in its demise.

Pantex – This town, was at the site that Phillips Petroleum Company completed its first plant in the Texas Panhandle in 1927. Called the Alamo Refinery, the Phillips Petroleum Company developed permanent housing and other facilities. Just next to Pantex was the town of Whittenburg. Pantex had its own post office for a brief time, established on May 21, 1925, with Robert F. Smith serving as postmaster. It was discontinued on January 15, 1927. The Pantex School was built on land purchased from the J.M. Huber Co. In 1928 the school had only 14 students. The school district would later consolidate with Borger in 1943, at which time, the school supported 155 students. In 1938, Pantex and Whittenburg merged to form the town of Phillips.

Peacevale – A postal stop once located in eastern Hutchinson County. Its post office was established on August 22, 1903, with Carrie L. Coffee as postmaster. It was discontinued on February 15, 1915, at which time the mail was sent to Adobe Walls.

Phillips – Located just two miles northeast of Borger in south-central Hutchinson County, it got its start early in 1926 after oil was discovered in the area. Pioneer rancher James A. Whittenburg sought to cash in on the coming boom by founding a community which he named Whittenburg, after himself. Whittenburg’s townsite was eagerly promoted by P. R. Williams of Amarillo, who predicted a population of 10,000 within a year. Soon, it had a next-door rival in the community of Pantex, which was a Phillips Petroleum Company camp. Phillips completed its first plant in the Texas Panhandle here in 1927. It was called the Alamo Refinery. As the company developed, the boomtown shanties and overcrowded rooming houses gave way to more permanent housing, and soon there were several churches, a hospital a number of businesses and a progressive school system. In 1935 a new $77,000 school building replaced an earlier brick structure. In 1938 the townsites of Whittenburg and Pantex voted to merge under the name of Phillips. Railroad service for the refineries was provided by a spur of the Panhandle and Santa Fe line.

In 1947 the population of Phillips numbered 4,250. By that time, the Frank Phillips Foundation had contributed thousands of dollars for scholarships for the children of employees who worked for Phillips Petroleum. The company also provided housing for teachers. After a fire razed the high school on March 19, 1950, classes were held in the Baptist and Methodist churches until the structure was rebuilt. In the 1950s and 1960s improved highways and faster local transportation resulted in the loss of most of the town’s businesses to nearby Borger. The population of Phillips decreased to just about 2,500 people in 1960 and the Phillips post office was discontinued by 1970. Along with the decreased population, businesses also began to close. 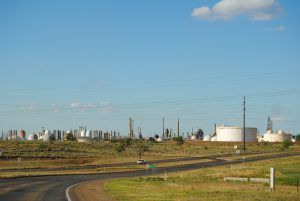 Though the town of Phillips is gone today, the plant still operates. By Kathy Weiser-Alexander.

On January 20, 1980, a hydrocarbon explosion wiped out two gasoline-producing units and a steam-generating facility, causing millions of dollars worth of damage to homes and businesses in both Phillips and Borger. The glow could be seen for miles. Dave Alexander, co-owner of Legends of America, lived in nearby Pampa at the time, about 30 miles away.  Dave says “I was a kid laying in my front yard looking at the sky when all the sudden the Sun started coming back up from the west..or at least I thought it was the sun”.

Phillips survived as a residential area for company employees until Phillips Petroleum Company forced the remaining homeowners to remove or abandon their homes in August 1989. At that time, Phillips was called home to about 1600 people. The refinery still operates today, and the only original buildings from the town,  those of the school, are used for offices. The town of Phillips no longer exists, and the site is behind the closed gates of the Phillips Petroleum Company.

Philrich Camp – This site was located northwest of Bunavista on the north side of Highway 136. Later, it became part of Borger.

Philview Camp – A small camp once located west of Borger