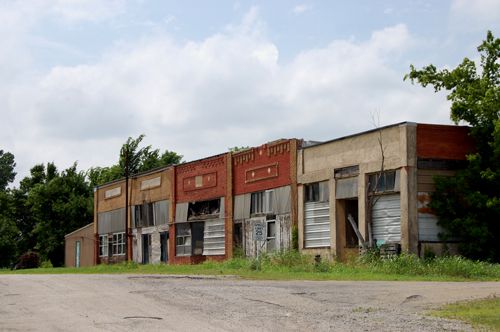 About 13 miles northwest of Depew, Oklahoma, sits the almost abandoned town of Shamrock. Once a booming oil town, with as many as 10,000 people, the town now sits fading with only about 100 residents, crumbling foundations, and long-closed businesses. The town began as a small farming hamlet with its post office established on July 9, 1910. Shamrock was named by the first postmaster, J.M. Thomas, for his hometown in southern Illinois. By 1913, the town supported two general stores, a restaurant, and a population of 35 people. 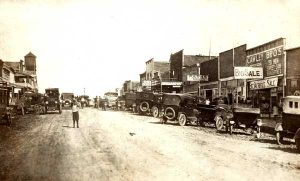 Shamrock, Oklahoma during its boom days.

However, this all changed when the Cushing Oil Field began to develop two years later. The townsite soon shifted to the southern edge of the oil field and became a boomtown almost overnight. Nearby, numerous oilfield camps, including Dropright, Gasright, Alright, Downright, Damright, and Justright sprung up in the vicinity.

When the new location for the town was surveyed and platted, Shamrock took on an Irish character with its Main street named Tipperary Road and other streets taking on monikers such as Cork, Dublin, Ireland, St. Patrick, and Killarney. Buildings were painted green, and the town acquired a Blarney stone. Its first newspaper was called the Shamrock Brogue.

Cushing, some 15 miles to the northwest of Shamrock, really boomed as it soon supported 23 refineries, and before long, the town of Drumright was formed just six miles north of Shamrock. 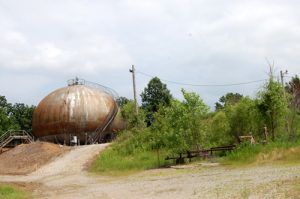 Remnants of better days in Shamrock, Oklahoma by Kathy Weiser-Alexander.

The Cushing field became one of the greatest oil discoveries of the early 1900s, producing 300,000 barrels a day by 1915. By 1919, the Cushing-Drumright area accounted for 17 percent of U. S. and 3 percent of world production of oil, becoming known as the “pipeline crossroads of the world.”

During Shamrock’s oil boom days, the town was a rowdy one with several gambling halls, saloons, brothels, and tough individuals. At one time, noted oil-field entertainer, Ruby Darby, performed in a Shamrock pool hall, entertaining her guests by dancing on top of a pool table.

Shamrock began declining in the mid-1920s as oil-field workers began to move on to new boomtowns. Before long, stores, pool halls, hotels, and other businesses began to close as the nearby oil-field camps were left deserted. Houses were moved to new locations, and business buildings stood closed up. 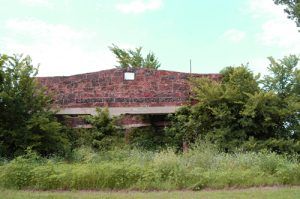 Built in 1927, this abandoned auto dealership is quickly succumbing to the brush, Kathy Weiser-Alexander.

By 1930 the population of Shamrock had decreased to about 700 persons. However, Shamrock still supported a bank that Pretty Boy Floyd robbed in 1932. Floyd was also seen casing the Depew Bank from the town’s post office, though he never robbed it.

Though the town is still called home to about 100 souls, many of its buildings sit decaying and vandalized. However, in keeping with its old Irish customs, the town still sports an annual St. Patrick’s Day parade. The town also continues to sport an open post office and a Grill & Grocery.

Shamrock is six miles south of Drumright, Oklahoma, on highway 16. To access from Route 66, travel approximately 3.5 miles west of Depew, then turn right on Creek County Road N3620 for about 9 miles before entering Shamrock. 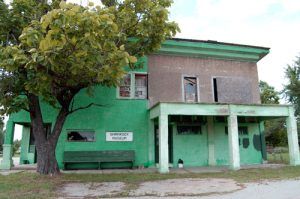 The closed Shamrock Museum building was once a general store by Kathy Weiser-Alexander.