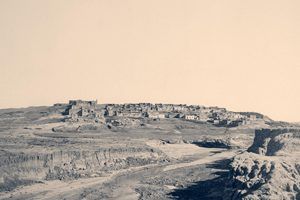 Located about 45 miles west of Albuquerque, New Mexico, is the Pueblo of Laguna. The largest of the Keresan pueblos, it comprises six small villages, including Laguna, Paguate, Encinal, Mesita, Seuma, and Paraje. Nestled below scenic Mount Taylor, ancestors of these Puebloan Indians are thought to have occupied these same lands since 1300 A.D. However, the area surrounding the villages indicates a more extended history, as archeological evidence has been dated back as far as 3000 B.C.

Pueblo tradition says that their people have always been there. The Spanish name, Laguna, translates to lagoon and is derived from a lake once located on the pueblo lands. The people refer to themselves as Ka-Waikah or Ka-waik, meaning “lake people,” though the lake has long since transitioned into meadowlands. Before Spanish incursions in the region in the 1500s, Kawaik residents lived in a border region between the Ancestral Pueblo people to the north and the Mogollon people to the south.

In 1539 a Franciscan friar, Marcos de Niza, claimed the Pueblo region for Spain, and by 1616, nine missions had been built at various pueblos. When the Spanish arrived in Laguna, they found a self-governing, agricultural society. The pueblo we see today was established after the Pueblo Revolt in 1699 by a group of Kawaik people and other refugees from Cienguilla, Santo Domingo, Cochiti, and Zia Pueblos. Built under the supervision of Franciscan Friars utilizing Laguna labor, it was the last mission built during this period. During Spanish rule, the Laguna people were not treated well but adapted to colonial rule by adopting and incorporating those aspects necessary for survival while maintaining their traditional beliefs. 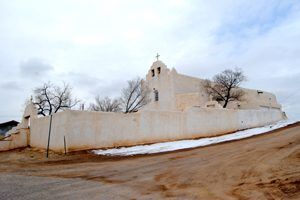 The pueblo expanded rapidly, growing to the north, east, and west, with the main village of Laguna built into the soft, light-yellow sandstone slope on the west side of the San Jose River. The original buildings were built of stone and adobe, and the St. Joseph Church, which dates from 1701, continues to dominate the skyline.

The Pueblo continued to thrive, moving from Spanish to Mexican rule to American rule in the 1800s. However, the changes brought more new challenges as the peoples’ traditional values and beliefs came into conflict with new governments. But, the Kawaik continued to endure. Agriculture continued to be a way of life, and Pueblo visitors often remarked on the quality of their crops. Starting with a Baptist presence in the 1850s and a Presbyterian presence in the 1870s, Protestant Christianity gained strength in the community and resulted in a split and the establishment of Mesita late in the 1800s.

In 1880 the Atlantic & Pacific Railroad began to be built through New Mexico. The pueblo allowed the company to lay track on the Laguna Reservation only if the railroad agreed to employ tribal members, setting a precedent for other tribes. 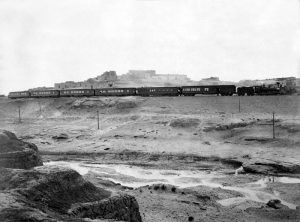 The railroad comes through the Pueblo Laguna, Detroit Publishing, 1899

In 1935, the historic mission in Laguna was fully restored, and today’s visitors are invited to visit the picturesque adobe mission perched atop a hill.

Prior to the 1950s, livestock grazing and other agricultural practices were the basis of Laguna’s economy. However, when uranium was discovered in 1951, mining would soon become the mainstay for the villages. The tribe leased 7,868 acres to a mining company that operated a uranium mine from 1953 through March 1982. One of the world’s richest uranium fields and the site of what was once the world’s largest open-pit mine was located near the village of Paguate. During this time, many men became miners, learned many mechanical skills, and the mines provided a revenue stream for the Pueblo. These were prosperous years for the mining company and the area residents. However, when the price of uranium ore dropped, the mines were closed in 1982. Afterward, the Pueblo faced hard years and high unemployment. The mining also left behind huge scars in the land and contamination requiring EPA cleanup.

However, with strong leadership and community support, the Pueblo created new economic opportunities, including the revival of the traditional craft of pottery making and other handcrafts, a tribal casino, tourism, a large construction company that does business all over the world, and numerous other businesses. Local feast days and festivals bring crowds to the villages, and the pueblo has five semi-pro baseball teams.

Though each village has its own church, the most prominent landmark of the Pueblo is the whitewashed St. Joseph Church in Old Laguna, which is readily visible from I-40 and Route 66. Listed in the National Register of Historic Places since 1973, the mission, built in 1699, is constructed of fieldstone, adobe, mortar, and plaster. The only openings in the fortress-like structure are the doorway and a small window in the upper front below the twin bells, which are set in the parapet. The mission is famous for its interior decoration, which displays original Laguna art and rare early Spanish paintings along the walls and the altar, and the woodwork in the mission is elaborately carved. St. Joseph Church is located at 1 Friar Road in Laguna and is generally open to visitors from 9:00 am to 3:00 pm Monday-Friday. 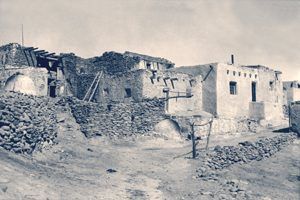 Today, the reservation consists of approximately 500,000 acres of land situated in Cibola, Valencia, Bernalillo and Sandoval Counties and is the second-largest in New Mexico. The tribe includes about 7,000 members. The pueblo also offers excellent fishing at Paguate Reservoir. Permits are required and can be purchased by contacting the Laguna Natural Resources office. A scenic view of the pueblo can be seen on Interstate 40 at mile marker 114. The pueblo-operated Dancing Eagle Casino and Travel Center are located at I-40 mile marker 108.

Route 66 bisects the heart of pueblo land. The initial 1926 alignment through this part of new Mexico curved north from Santa Rosa to Santa Fe and then south to Albuquerque and Los Lunas, returning to an east-west alignment near Laguna. Route 66 through new Mexico was realigned in 1937 to eliminate this dramatic “S-curve” through the state and reduce its mileage from 506 to 399. The new alignment left Santa Fe and Los Lunas behind, but Laguna remained along Route 66.

The villages of Mesita, Laguna, and Paraje are located on Route 66. When traveling the Mother Road westbound, take Exit 117 off I-40 onto the north service road (old Route 66). Mesita, the easternmost village of the Laguna Pueblo, comprises a scattering of homes on both sides of I-40. 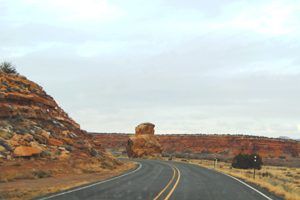 Mesita was established on the south bank of the San Jose River in the 1870s by a faction that split from the Laguna Pueblo people. The split was due to the growth of Protestant Christianity in the area after the arrival of the Baptists in 1850 and the Presbyterians in the 1870s. The word “Mesita” means “small mesa” in Spanish, but the Puebloans’ name for the village is “Tsé Ch’ ééhii,” which means “Red Rocks Pointing out horizontally.”

In the 1880s, the Atchison, Topeka, and Santa Fe Railroad reached the area and extended its tracks from Albuquerque towards Gallup through Mesita. Its station was named “El Rito,” meaning “tiny river.”

In 1932, when Father Agnellus began his assignment at Laguna, he undertook the construction of four more churches, two of them in Laguna villages. In Mesita, there was an old chapel, built in 1915 and dedicated to St. Anthony. This church was used until 1936, when the new chapel was completed and dedicated to the Sacred Heart of Jesus. The active church continues to stand today.

Stay on old Route 66 for another five miles to Laguna. Along the way, look for Owl’s Rock to the right, about two miles west of Laguna. A bit further down, you’ll come to the notorious Deadman’s Curve, a 180-degree bend in the road to the left. You can bet this turn scared more than one old Route 66 traveler in days past. Approaching the village of Old Laguna, follow the sharp left turn, then turn right onto Highway 124 through the village. 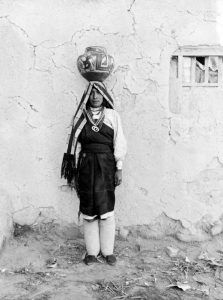 Old Laguna was the first village of the pueblo. Its highlight was its historic St. Joseph Mission Church, built in 1699. Sitting atop the hill, it can be seen for miles around. The old village also displays a number of old adobe buildings in various states of repair.

Stay with Highway 124 across the railroad to New Laguna, where the buildings are generally newer and comprised mostly of homes.

Another three miles down west of New Laguna, Route 66 travelers will come to Paraje, another village of the pueblo. Paraje means “place” or “residence,” Many villages were first called names like Paraje de Belen or Paraje de Bernalillo because they served as a stopping point for travelers. The village comprises homes and ruins of a few old buildings, but its active church continues to stand. The St. Margaret Mary Mission Chapel was constructed by the residents of Paraje village in 1935.

West of Paraje, Route 66 (NM-124) continues westward through Budville, Villa Cubero, and San Fidel before the old road meets back up with I-40.