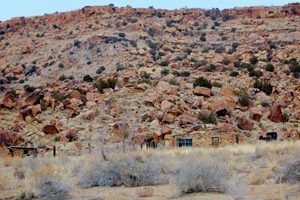 From the Laguna Pueblo, Route 66 continues west through Indian Lands, passing through a number of ghost towns before reaching Grants, New Mexico. Along this stretch, you will see numerous ruins and foundations dotting the landscape. Made of native stone, these rustic old buildings easily blend into the surrounding countryside, so you will have to keep your eyes wide open and your camera ready.

Just a few miles west of Paraje, Route 66 travelers will reach the once active trading center of Budville. 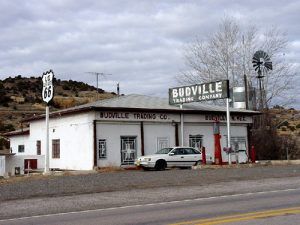 Named for H.N. “Bud” Rice, it got its start when Bud and his wife Flossie opened an automobile service in 1928. Soon afterward they opened the Budville Trading Company, and over the years — a gas station, a few cabins, and the only tow company between the Rio Puerco River and Grants for a number of years. They also sold bus tickets, operated a post office, and Bud served as the Justice of Peace, a position in which he was known to have issued steep fines, especially to anyone outside of the area.

Having operated the business for 39 years, the store was held up by a desperado in November 1967. There were four people in the building at the time — Bud, Flossie, an 82-year old retired school teacher named Blanche Brown who worked part-time, and a housekeeper named Nettie Buckley. Within moments, shots were fired and the gunman fled leaving behind a scene that would earn the trading post the moniker of “Bloodville.” Fifty-Four-year-old Bud Rice and the elderly shop keeper Blanch Brown were dead. Flossie and the housekeeper survived. Though arrests were made, no one was ever convicted of the crime. 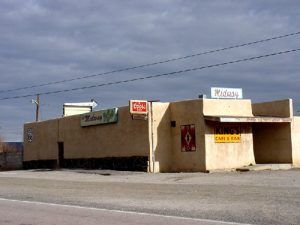 Afterward, Flossie continued to run the family businesses and remarried a man named Max Atkinson. Six years after she had lost Bud, her second husband was killed in a fight in 1973, just feet from where Bud had been killed. Once again Flossie persevered and continued to run the business up until 1979 when its doors closed for good after 66 years in business. Somewhere along the line she married for a third time and passed away from natural causes in 1994. The buildings were eventually sold and there was some talk of it being reopened but it never occurred.

Across the street is the closed Dixie Bar, which was established in 1936 and on down the road just a bit is the old King’s Café and Bar with it vintage signage. Today, the cafe’s name has been changed to the Midway where travelers can still get a hot meal and a cold beverage on this lonely stretch of the highway.

In Budville, between the Budville Trading Company and the old Dixie Bar, the pre-1937 alignment (Old Route 66) splits off of Highway 124 and heads northeast for about 1.5 miles to the centuries-old village of Cubero. Initially, this was the site of a pre-Spanish Colonial-era pueblo. The earliest known documentation of the village dates to 1776. In its early days, the settlement served as a garrison town for the Spanish.

In 1833, the government of the Republic of Mexico made a land grant to a group of people to form a colony at the site. In 1866, a mission was established and Our Lady of Light Catholic Church was built. The building, constructed of 40-inch thick adobe walls, also served as a refuge against Apache and Navajo raids. For many years, an abandoned cannon remained on the church grounds. Unfortunately, the church walls were weakened by flash floods and construction of a new church began in 1972 and was dedicated in 1975.

During the early 1920s, the area was discovered by tourists traveling through the Southwest in automobiles along the National Old Trails Highway. Old trading posts and new businesses sprang up to capitalize on this opportunity. Wallace and Mary Gunn operated one of these trading posts and did good business by providing the locals with groceries, dry goods, and coal oil in exchange for livestock, pottery and Indian art. The crafts of locals were then sold to the attentive tourists. But, for the village of Cubero, the tourist traffic wouldn’t last. In 1937, Route 66 was realigned, bypassing Cubero and making a path directly from Budville to San Fidel. 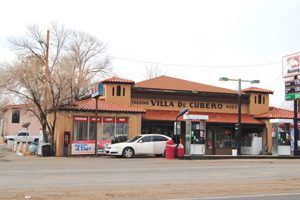 Route 66 travelers can return to the newer alignment by backtracking on old Route 66, or by heading west onto Cubero Loop, which will hook back up with Highway 124 (post-1937 alignment of Route 66.)

Shortly after the realignment of Route 66, the Wallace and Mary Gunn relocated their business to the new alignment. Called the Villa De Cubero Trading Post, the complex grew to include a service station, cafe and a small tourist court. The villa became popular with celebrities such as Dezi and Lucy Arnez, Vivian Vance, and the Von Trapp family. Reportedly, Ernest Hemmingway, resided in the small tourist court for two weeks while working on The Old Man and the Sea. Mary Gunn ran the cafe across the street from the trading post from 1941 to 1972.

Though the cafe and tourist courts are closed, the trading post still caters to Route 66 travelers today, operating a convenience store and gas station.

Route 66 continues from the Villa Cubero through stretches of desert surrounded by beautiful multi-colored formations as you continue the short three miles to yet another ghostly town – San Fidel. Mount Taylor, one of the highest peaks in the area, is visible along this section as well as the fading remains of several long closed tourist facilities. 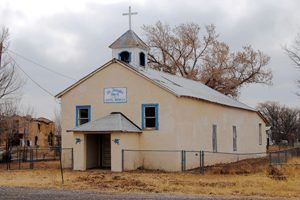 San Fidel, a small Hispanic community today, was established in 1868 when Baltazar Jaramillo and his family settled here. In its early years, it had no church, but the community residents were able to worship when priests visited from Seboyeta and San Rafael. A church was built for the people of the village in 1892. It was first called Ballejos and gained a post office in 1910. However, its name was changed to San Fidel in 1919, honoring the saint, a suggestion made by an area priest.

St. Joseph Church was built in 1920 and the next year, San Fidel became a parish because of its central location into the Acoma and Laguna Pueblos and the villages of Cubero, Seboyeta, Moquino, Bibo, San Mateo, San Rafael, and Grants; as well as its proximity to the railroad. The rectory was built in the early 1920s and housed the priests who served the missions for many years. In 1924, a school was built and first served as a public school. Later, it became St. Joseph Mission School and still serves about 50 pre-K to 8th-grade children from the Laguna and Acoma Pueblos as well as the Spanish villages of Cubero and Seboyeta.

As the years passed other parishes were established and only Cubero remained as a mission of San Fidel. That too changed when Cubero was entrusted to the care of a pastoral administrator. In 1981, the rectory was converted into a convent for the Sisters who staff the school. Today St. Joseph’s Church is only used on special occasions.

2 thoughts on “Ghost Towns in Indian Country of New Mexico”