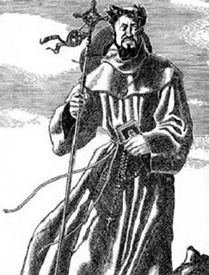 A Franciscan priest, Fray Marcos de Niza, who is said to have traveled to the fabled “Seven Golden Cities of Cibola” in what is now the western part of New Mexico. He sailed to the Americas in 1531 and traveled to Peru, Guatemala, and Mexico.

Marcos was born in Nice, Italy in about 1495 and grew up to become a Franciscan friar. In 1531, a group of friars were selected to accompany the Spanish conquistadors to the New World and Marcos De Niza was among them. Fray Marcos first served in Peru, then Guatemala before he was chosen to explore the country north of Sonora, Mexico. The area, based on hearsay stories of Alvar Nunez Cabeza de Vaca and other explorers were allegedly filled with wealth. In March 1539, the friar, proceeded by the slave, Estevanico, who had been to the area, started out from Culiacan, Mexico and crossed into southeastern Arizona. 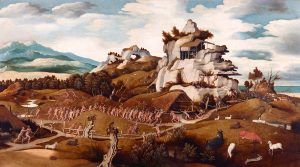 The slave and guide, Estevanico, was sent ahead as an advance scout. Separated by several days travel from Fray Marcos de Niza, Estevanico approached “Cíbola,” which is thought today, to have been the Zuni pueblo of Hawikuh. On his arrival, he announced his intentions to make peace, heal the sick, and told the villagers that he had been sent by white men who would soon arrive and instruct them in divine matters. The village elders, suspicious of his claims that he came from a land of white men because he was dark, and resentful of his demands for turquoise and women, killed him when he attempted to enter the village.

Fray Marcos and the rest would arrive a few days later; but, never went into the village. In September, Fray Marcos returned to Mexico saying that he had seen Cibola from a distance and described it to be equal in size to Mexico City. He was made provincial superior of his order for Mexico. However, his descriptions of what he had seen soon led Francisco Vázquez de Coronado to make his famous expedition to explore the famous city himself in 1541. With Fray Marcos as his guide, Coronado led his troops into present-day New Mexico and the Zuni Pueblo. With the reality of what the Spanish found, Fray Marcos returned to Mexico in shame. He died there in March 1558.

Compiled by Kathy Weiser-Alexander, updated May 2020.