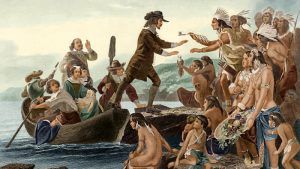 The Narragansett people are an Algonquian American Indian tribe from Rhode Island. Their name is said to mean “People of the Small Point.”

Archaeological evidence and the tribe’s oral history says that the people occupied Rhode Island for thousands of years before Europeans arrived. They also controlled portions of Connecticut and eastern Massachusetts. They were known as great warriors and offered protection to smaller tribes in the area who paid tribute to them. These included the Manissean, Niantic, Nipmuc, and Wampanoag.

Historically, the people had two homes — one they lived in during the winter and another in the summer. Their winter homes were longhouses in which up to 20 families would live. In the summer, the tribe moved to the seashore, where erected temporary wigwams made of bark and reeds. They survived by cultivating corn, hunting, and fishing. They were divided into multiple bands, each of which was ruled by its own territorial chief, each of whom was under the leadership of a head chief or sachem. 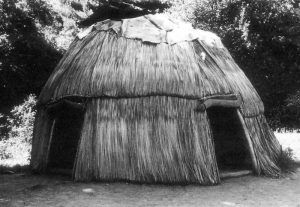 The first documented contact with the Indians of Rhode Island took place in 1524 when Giovanni de Verrazano, an Italian explorer in the service of King Francis I of France, visited Narragansett Bay. Upon his visit, he described having seen a large Indian population who lived by agriculture and hunting and were organized under powerful “kings.” During this time, the population of the Narragansett was said to have numbered more than 10,000.

Europeans began to settle in Rhode Island in about 1635, and the next year, Roger Williams acquired land use rights in the present-day area of Providence from the Narragansett Sachems. Williams became known as the founder of Rhode Island when he established the Providence Plantations.

The Narragansett allied themselves with the New England colonists during the Pequot War of 1636-37. However, the brutality of the Mystic Massacre in Connecticut in May 1637 disgusted the Narragansett, who then began to turn against the Europeans. 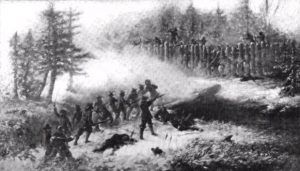 In 1675, the Narragansett allied themselves with King Philip, the Wampanoag Sachem, to support them in their efforts to reclaim their land in Massachusetts. During the war, a battle now known as the Great Swamp Massacre occurred in December 1675. During this conflict, the Narragansett lost almost 20% of their population, including many hundred women and children. Following the massacre, many of the remaining Narragansett retreated deep into the forest and swamplands in southern Rhode Island. Others were hunted down and killed. Some were sold into slavery in the Caribbean, and others migrated to New York and Wisconsin. Today, an obelisk commemorates the Great Swamp Fight on South County Trail in West Kingston, Rhode Island.

By 1682 less than 500 Narragansett remained. They were then settled on a reservation at Charlestown, Rhode Island, with the Niantic tribe on a reservation at Charlestown, Rhode Island. On the reservation, the people were under great pressure to abandon their traditional ways and adopt “civilization.” Formally, their “sachem system” was abolished and replaced by a five-man council in 1792. However, tribal members continued to recognize the Sachems and traditional leadership. Further, as the number of colonists arrived, the Narragansett hunting and farming grounds were greatly depleted, and the clam beds along the coast were destroyed.

By the end of the 18th century, the reservation area had been reduced to 15,000 acres. Over the next decades, the State of Rhode Island attempted to relieve itself of the responsibilities of a trustee of the reservation and “detribalized” the Narragansett, declaring that it was no longer an Indian tribe because its members were multiracial in ancestry. During this time, the reservation lands were continually reduced. Though the Narragansett fought these actions with petitions and in the courts, it was to no avail. In the meantime, however, they continued to maintain their traditional government and recognized Sachems, Medicine Men and Women, and the Tribal Council.

The Narragansett Tribe of Indians was officially incorporated in December 1934. In 1975, the Tribe filed a land claim suit against the State of Rhode Island and several landowners to return approximately 3,200 acres of undeveloped reservation lands. Three years later, the suit was concluded in an out-of-court settlement in 1978 of approximately 1,800 acres. In 1978, with the support of the Native American Rights Fund, the tribe began to work for federal recognition, which was finally acknowledged in 1983. 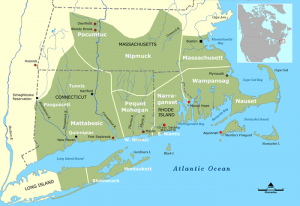 Today, the tribe’s current population is about 2400 members, most of whom live in Rhode Island. Though the Narragansett language became almost entirely extinct during the 20th century, the tribe has begun language efforts to revive the language.