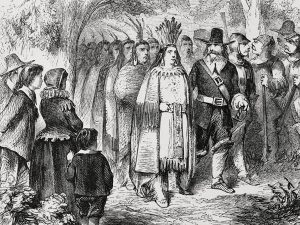 The tribe was semi-sedentary, with seasonal movements between sites in southern New England. The men often traveled far north and south along the Eastern seaboard for seasonal fishing expeditions, and the women cultivated varieties of maize, beans, and squash. The men also hunted game. Each community had authority over a well-defined territory.

Unfortunately, in the early years of colonial settlement, the relationship between the tribe and the settlers went downhill as disease and British attacks killed most of the Wampanoag people.

Today about 300 Wampanoag people live on a small reservation on Martha’s Vineyard, which belongs to them and is under their control. However, the US government still considers them citizens and controls some of their decisions. Other people of Wampanoag descent live in communities within Massachusetts and Rhode Island. Slightly more than 2,000 Wampanoag are counted as enrolled members of the nation today and many live near the reservation