Heading west from Springfield, Missouri, on old Route 66, travelers will make their way through a scenic stretch of the Mother Road that provides numerous peeks at the past along this almost abandoned piece of payment.

This stretch of the road was once the Springfield to Carthage stagecoach road. When automobiles became more common in the early 1900s, the Ozark Trail was developed in 1915. It made its way from St Louis, Missouri, across Oklahoma, Texas, to Romeroville, New Mexico, where it met the Old Santa Fe Trail.

When Route 66 was created in 1926, the old Ozark Trail was utilized as the new alignment from Springfield to Carthage. Along this stretch were several towns, including Halltown, Paris Springs Junction, Spencer, Avilla, and more, that thrived when the new highway came through.

Unfortunately, in 1961, portions of the old road between Spencer and Paris Springs were realigned in anticipation of the new Interstate-44 planned. At this time, the other towns along the road between Springfield and Carthage fought to keep the designation of US 66 and threatened to sue. However, their fight was in vain, and highway officials responded by building the new four-lane farther south. By 1965, all of these towns were bypassed entirely. 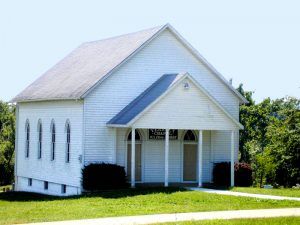 The Yeakley Methodist Chapel west of Springfield, Missouri, was established in 1887. Photo by Kathy Alexander.

Though large farms and ranches still populate this old road, this slice of the highway has long passed its prime. Some of the settlements along this section still have a few people living in them, but almost every one of the dozen or so towns that once thrived here have become ghost towns or don’t exist at all anymore.

Old Route 66 meanders westward out of Springfield on Missouri Highway 266 through rolling hills situated along the western edge of the Ozark Plateau. Within a few short miles, the highway comes to what must be one of the oldest cemeteries on Route 66 – the Yeakley Cemetery, established in 1852.

Named for a prominent farmer and rancher named Thomas Yeakley, this well-tended cemetery also boasts the Yeakley Chapel, built in 1887, that continues to provide services today.

The town of Yeakley that once stood here had a post office and a population of about 30 people in the late 1800s. All that remains today are the church and cemetery.

The Ghost Town of Plano 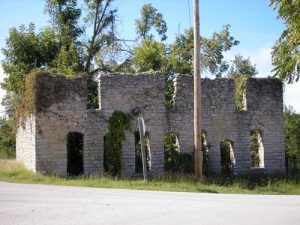 A few more miles brings travelers to the junction of Missouri 266 and Farm Road 45, where the small community of Plano, Missouri, once stood. Today, there are but two buildings left that pre-date Route 66.

A crumbling stone building on the northwest corner of an intersection looks like it might have survived several of Missouri’s many Civil War battles when this old route was known as the “Wire Road,” a strategic path that extended from St. Louis to Fort Smith, Arkansas. The tree-infested limestone building sometimes serves as a casket factory and mortuary, but that is not true. The 50-by-60-foot building was constructed from native limestone by John Jackson and his family. On the first floor was a general store that Jackson’s son and two daughters managed. The family’s living quarters and a large room utilized for meetings, dances, and church services for area residents were on the second floor. 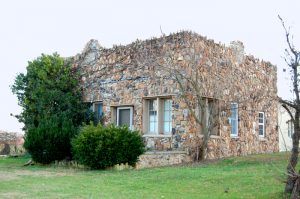 This residence in the ghost town of Plano, Missouri, was once a Tydol Station.

The confusion regarding the history of the building comes from the fact that there was a mortuary and casket factory later built in a wooden building across the street, which no longer stands today.

A rock building on the southeast corner of the crossroads once served as a Tydol gas station and store. Today it is a private residence. When I-44 replaced Route 66, Plano died.

The old road rolls over gently sloping hills before arriving at Halltown.