This area was first settled in the 1850s and a village was established about a half-mile north of the junction. When the village gained a post office in 1872, it was called Chalybeate Springs, for the iron-rich healing waters flowing from Clover Creek. Two years later, the name of the post office and the town were changed to Paris Springs, after Ely Paris, who had bought some 200 acres in the area in 1868. While actively engaged in farming and stock-raising, Ely improved the ground surrounding the springs by erecting a number of buildings, including a hotel. The health-giving qualities of the water drew hundreds of people to the area and the village became known as a summer resort. The mineral-rich springs also gave rise to the sale of bottled waters.

The town grew to include a sawmill and wool mill run by Oliver Johnson, a chair factory operated by E.L. Davis, and other businesses such as a blacksmith, shoemaker, a wagon-maker, and an attorney. But, despite its thriving start, the town began to face a decline in the early 20th century and its post office closed in 1920. 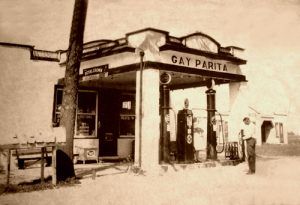 When Route 66 barreled through in 1926, it bypassed Paris Springs by ½ mile. Before long, a few businesses were set up to the south to take advantage of the many travelers along the new highway. This small cluster of buildings soon took on the name of Paris Springs Junction.

A dome-shaped cobblestone garage was one of the first buildings to be built at the junction in 1926. Four years later a Sinclair station was built next to the garage. Owned by Gay and Fred Mason, the couple also built three cabins and a restaurant/store was constructed across the road in about 1930. The Gay Parita Store/Restaurant was built in a Spanish Revival style and was much larger than what was typical at such a small crossroads community at the time. 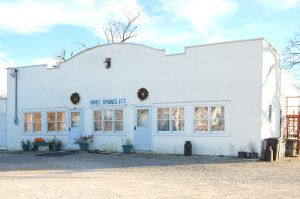 Taking advantage of the busiest road in America, the Mason’s did a brisk business fixing flat tires, and selling gasoline, sodas, and sandwiches for the next 25 years. When Gay Mason died in 1953, Fred continued to operate the business, but tragedy struck again when the Sinclair station burned down in 1955. Fred then retired to his home behind the burned-out station. He died in 1960.

The next year, Route 66 was realigned bypassing Paris Springs and nearby Spencer. In 1965, this entire section of the road was bypassed by I-44 to the south.

Afterward, the Gay Parita Store was converted to a residence, which continues to stand today.

However, this small burg gained new life when the Gay Parita property on the north side of the road was purchased by Gary and Lena Turner. Working with his son, Steve, Gary rebuilt the old Sinclair Station, which today beckons a new generation of Route 66 travelers. While the “new” station is not an exact replica of its predecessor, its facade is in character for the 1930’s era.

The “station” doesn’t sell anything — no gas, no sundries, no gimmicks or tourist memorabilia — just memories and enthusiasm spilling from one of Route 66′ biggest fans – Gary Turner. He filled the old 1926 cobblestone garage with old vehicles and memorabilia. Sadly, Gary Turner passed away in January 2015 and his wife Lena just a few months later. Gary spent many years welcoming roadies from all over the world, sharing Route 66 history, and promoting the road. He will be missed, but there is life still at the Gay Parita, as Gary’s daughter Barbara Turner took over in 2016. 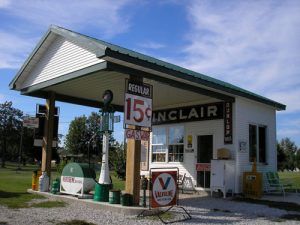 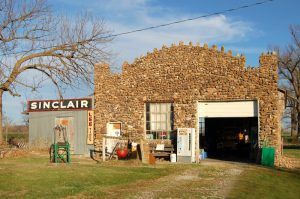 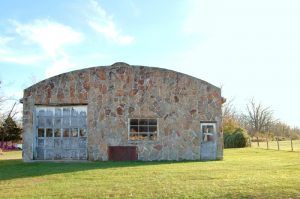 A couple of other buildings also continue to stand in Paris Junction including Dot Mason’s Log Cabin Station, which later served as an auto sales building, and a 1944 slab stone garage.

As to the original Paris Springs, ½ mile north of the junction, the only remaining building is a small church.

Paris Springs Junction is located about 25 miles west of Springfield, Missouri on Highway 266. 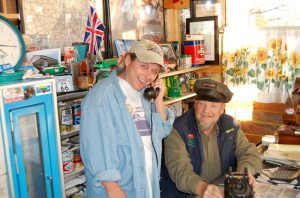