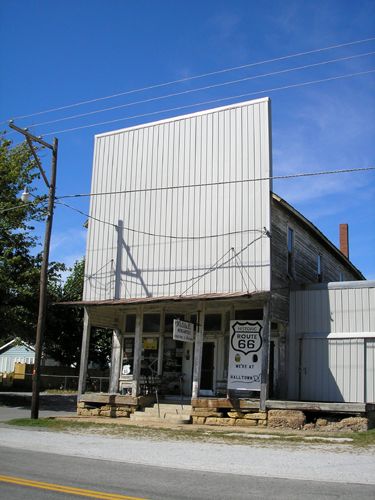 Halltown, Missouri, located on old Route 66, is a small village in Lawrence County, about 13 miles west of Springfield.

After the Osage Indians were moved from Missouri to Oklahoma, this area was first settled in the 1830s. The Rock Prairie Cemetery, also called the Halltown Cemetery, just south of town along State Highway Z, was established in 1838 after James N. Downing, Jr., donated the land. Downing was one of the earliest settlers who arrived in about 1833. The earliest known burial was Sarah Walker Carlisle, a Cherokee Indian and mother of James Downing’s second wife, Mary “Polly” Carlisle Bell. She died in 1845.

An official town would not begin until George Hall came to the area, and the Hall Post Office operated from 1860 to 1864. In 1876, George Hall opened a store, and the following year, he platted Halltown on his land. Another post office opened in 1879. The new town was located on the Springfield to Carthage stagecoach road. 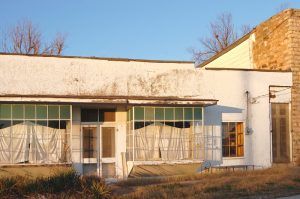 This building in Halltown, Missouri, was built in 1906 and served several purposes through the years. It last housed Richard’s Antiques but is vacant today. By Kathy Alexander.

Soon other businesses and buildings were built in the town. In 1900, the building that later was called Whitehall Mercantile was established. The two-story Victorian-style commercial building, with its false front, first housed a grocery store and post office on the first floor, and the upstairs was used for fraternal and community functions. In later years, the building served various functions and two single-story additions were added to the rear and east sides of the building.

It became the Whitehall Mercantile many years later when Jerry and Thelma White leased the building in 1985 and turned it into a popular antique store. Thelma soon became a co-founder of the Missouri Route 66 Association and wrote a small book of interviews she conducted with people living and working along the Mother Road in its heyday. Unfortunately, Thelma died in 2010, but her husband continued to run the store until it closed in 2016.

In 1906 a large stucco and stone building was built at 1911 Main Street. The building, measuring 50 x 60 feet, served as a livery and meatpacking plant in its early years. Afterward, it served several commercial purposes, and its original storefront was significantly altered with the addition of projecting bays and windows. Its last use was as Richard’s Antiques, but it is vacant today.

A large two-story rock building was built at 1904 Main Street in about 1907. The building was constructed of large rock-faced limestone blocks of varying sizes and featured stone-arched doors and windows. It shared a wall with the building to the west. Over the years, it served for various commercial purposes, including as a movie theater, a warehouse and a specialty store. The building is vacant today. West’s Grocery Store once stood on the north side of Main Street in Halltown, Missouri. However, it is gone today. Photo by Kathy Alexander.

West’s Grocery Store once stood at 218 Main Street. The brick front building built in 1922 was initially designed for two businesses with a large front porch supported by decorative metal posts with railing. Over the years, the building housed a grocery store, the post office, and finally, a flea market. It was razed in about 2016.

By the early 1920s, the town center consisted of three grocery stores, a drugstore, a variety store, a blacksmith shop, a bank, a garage, and a church. When Route 66 came through in 1927, Halltown thrived, and more businesses were added to service the traffic, including gas stations and cafes.

In 1930 the Las Vegas Hotel and Restaurant were built on the south side of Main Street specifically to capture the roadside business generated by Route 66. The Mission/Spanish Colonial Revival building was built of stucco and wood and serviced travelers along the Mother Road for years. Today, the building has been converted to apartments and still stands. To the west, a small building also stands once used as a barbershop. After World War II was over and people started to travel in great numbers, about 20 businesses were lining both sides of the road, including five gas stations, cafes, antique shops, and stores. Halltown was often called “The Antique Capital of the U.S during these heydays.” At that time, the town was called home to about 200 people and had seven antique stores specializing in something different.

Unfortunately, Halltown and the rest of the communities along this stretch of Route 66 were bypassed by I-44 in 1965, and the town began to die.

However, the town continued to thrive for years afterward with its multiple antique stores inviting people to visit. Today, while Halltown continues to exude small-town charm, its businesses are closed, and its boarded-up stores sit quietly in this small town populated with farmers and Springfield commuters. However, the town still has a post office that serves about 170 people.

This semi-ghost town is located on Highway 266, about 13 miles west of Springfield. From Halltown, Route 66 continues for just three miles before reaching Paris Spring Junction. The Christian church in Halltown, Missouri, is still active today by Kathy Alexander.