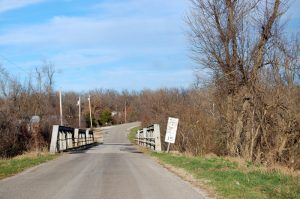 1923 triple pony-truss bridge over Turnback Creek between Spencer and Paris Springs on an old alignment of Route 66. Photo by Photo by Kathy Weiser-Alexander.

West of Paris Springs Junction, old Route 66 takes a jog off of State Road 96 onto County Road N to Spencer, Missouri. This very old piece of concrete pavement first crosses a 1923 triple pony-truss bridge over Turnback Creek before meandering on to traverse a 1926 one-lane steel truss bridge over Johnson Creek. Just beyond are the few remains of the ghost town of Spencer.

This tiny little settlement started in the 1860s on the old Carthage-Springfield Road after Oliver Johnson built a mill along a creek that was soon named after him. The site became a popular stopping place for travelers who stopped along Johnson Creek near the flour mill. The place was initially referred to as Johnson’s Mill until a Mr. Spencer opened a store at the site where a post office was established in 1868, which was called Spencer.

By the 1880s, the village had another general store, a schoolhouse, and a Methodist and Christian Church. Before long, others moved into the settlement, and the town gained a grocery store and blacksmith shop. But the town would be short-lived for the agricultural community. The post office closed in 1907, and the road to Spencer became impassable by 1912. Once traffic stopped, businesses closed, people moved on, and Spencer became a ghost town 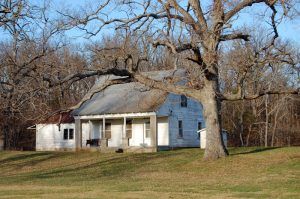 More than 20 years later, a man named Sydney Casey learned the plans for a new highway in 1925. He soon paid $400 for the old town of Spencer, a vacant store, and two acres of land. Route 66 was blazed through the area, and Casey reopened the old grocery store just one year later. He soon constructed a new building next to the old store, and by 1930, he had expanded it into a row of buildings, with the store on the left, a structure in the middle that served at various times, as a feed store, cafe, and barbershop, and at the far right, was a service station and garage. Casey’s service station began as a Tydol station, but it later became a distributor for the Phillips 66 brand.

The Casey family ran both the store and the service station/garage, while various people operated the middle building over the years. Spencer soon became a community center, as well as a traveler’s stopover. Dances were held on a platform across the highway, neighborhood news was exchanged from the bench in front of the store, and an old stove in the garage provided a comfortable gathering spot for card games. 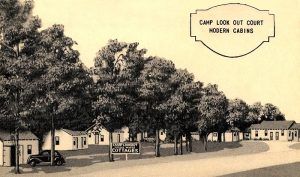 Camp Lookout in Spencer, Missouri, during the heydays of Route 66.

Across the road in the wooded area next to Johnson Creek once stood the Camp Lookout Modern Cabins, which featured nine cabins and advertised itself as spotlessly clean and “your home away from home.”

Unfortunately, the “new” Spencer would not last. In 1961, Route 66 was realigned through the area, bypassing Spencer and nearby Paris Springs Junction. Afterward, the store and gas station went out of business. This was just a precursor for the rest of the area when Route 66 in southwest Missouri was bypassed by I-44.

Carl and Ruby Casey purchased the property from his mother and brothers in 1985 and took residence in the family home behind the store buildings. 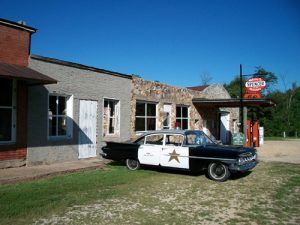 Afterward, the row of vacant buildings vacant sat empty and silent until they were purchased by Francis and Marie Lynn Ryan of Salina, Kansas. The Ryans obtained the property from Kent Casey, whose grandfather, Sydney Casey, first acquired the land in 1925.

Today, the gas station and garage have been restored to their former glory, welcoming a new generation of Route 66 travelers. The gas pumps, signs, and other memorabilia are from the Ryans’ personal collection. Helping with this project are locals Quentin and Cathy Stockham, who have placed a vintage police car in the front of the buildings. Though tiny Spencer was never large enough for a police department, it adds another touch of great nostalgia to this historic site.

More plans are in the works to restore all of the buildings, bringing yet more character to the forgotten little town of Spencer. The concrete roadbed in front of the building row is some of the last of the original highway Route 66 surface still in use.

From here, Route 66 continues by traveling northwest about one mile before rejoining MO-96 and making its way westward another five miles to Heatonville. 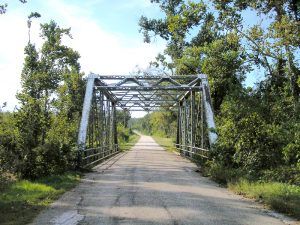