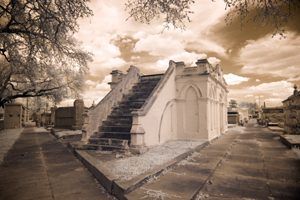 Established by a Spanish royal decree on August 14, 1789, St. Louis Cemetery #1 is not only the oldest cemetery that can be visited in New Orleans, it is also said to be the most haunted.

By the late 18th century, the city’s older cemetery — St. Peter Cemetery (no longer in existence) had begun to fill up, and the town development had reached the site’s boundaries. Recognizing the need for the new burial place, city administrators made plans for a new burial site which was far away from the center of population, due to fears that contagion and disease would spread. A below sea level swampy site on St. Louis Street was selected because high ground sites were much too expensive.

Upon initial development, the cemetery was divided into sections for Catholics, non-Catholics, and slaves. Initial burials appear to have taken place in a haphazard manner, leading to the current maze of tombs and aisles. Though the cemetery spans just one square block, it is the resting place of thousands. Currently, it holds over 700 tombs, the remains of over 100,000 people, and is still the site of several burials each year. It is listed on the National Register of Historic Places. 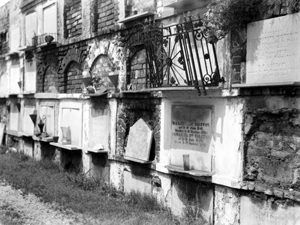 Because New Orleans has issues with high groundwater nearly all the graves are in above-ground vaults. Following the Spanish custom of using vaults, they range from simple to very grand. Walls in the cemetery are made of economical vaults stacked on top of one another, while other ornate crypts built by wealthier families look much like tiny houses, complete with iron fences.

Nicknamed “the Cities of the Dead” by the famed author, Mark Twain, its age is prominently displayed in chipped and crumbling tombs, broken shells and cobblestones that form the pathways, and vandalism. However, its age and deterioration take nothing away from its haunting beauty.

Due to the rise in vandalism, the cemetery was closed to the public in March 2015. However, visitors may still enter the burial grounds with authorized tour guides and companies.

Considered one of the most haunted cemeteries in all of the United States, reports of paranormal activity have been occurring for more than 200 years. 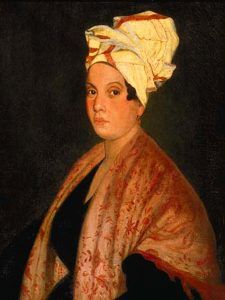 One of the most famous ghosts of the Cities of the Dead is that of Marie Laveau, better known as The Voodoo Queen of New Orleans. Born as a free Creole woman of color on September 10, 1881, she was the illegitimate daughter of a free man of color and a Creole mother. Historians believe that Marie’s mother and grandmother were also voodoo practitioners. As an adult, she practiced fortune-telling, the occult, Voodoo, and worked with herbal remedies, while incorporating her Catholic religion, African religion, and culture. Word of her successes soon spread throughout the area and before long she was renowned in New Orleans as the Voodoo Queen. She lived until the age of 86 when she died on June 15, 1881. Interestingly, there were a number of people who claimed to have seen her in the days after she died.

More than 130 years later, people are still saying that they have seen her. Her misty ghost has been seen walking along the pathways of the cemetery wearing her trademark red and white turban and brilliantly colored clothes. Many report that she simply vanishes if they try to follow her. Some say that she mumbles an original New Orleans Santeria Voodoo curse as she walks along. At times the curse is so loud that people have heard it outside the burial ground. Others have reported seeing her ghost emerging from inside her tomb. On many occasions, she appears to be in a foul mood as she storms along the pathways.

She has also been spotted in a number of other locations throughout the French Quarter, most often walking down the street she once lived on. For some non-believers who scoff at her, or her beliefs or religion, they have reported being scratched, pinched or shoved down to the ground.

Other reports include feelings of being touched, becoming unexplainably ill, and hearing voices emanating from inside her tomb.

Laveau’s tomb itself is a popular tourist attraction with many a visitor leaving offerings, candles, flowers, Voodoo dolls, and beads in the hopes that Laveau will bestow her blessings upon them.

Even more bizarre, rumors abound that say her soul appears in various places as a large shiny black Voodoo cat, with fire red eyes. Recommendation to visitors who may see this cat is to cross themselves three times and back away, rather than turning on the cat, for fear of being cursed.

Another tale says that the Voodoo Queens “familiar”, a large snake that she called Zombi, was placed in her coffin when she died and is entombed with her. Today, it is said that the snake guards her tomb and has been seen slithering around the crypt or basking in the sun atop of it.

One more strange story repeated is that ghostly nude Voodoo practitioners have been spied dancing in a ritual over which Marie Laveau, dressed all in white, presides.

Another spirit that is said to haunt the old cemetery is that of a man named Henry Vignes. A sailor during the 19th century, Vignes was a nomad of the sea, but when he was in New Orleans he called a certain boarding-house home. Evidently, his roots were in New Orleans because there was a family tomb in the St. Louis cemetery. Before heading out on his last voyage, he was worried about his important papers and asked the owner of the boarding house if she would keep them in a safe place while he was away. She agreed to look after the documents which included the papers for his family’s tomb. But, Henry had placed his trust in the wrong person. Upon his return, he discovered that she had sold his tomb. Before he could seek justice, he grew ill and soon died. Penniless, he was buried in an unmarked grave in the pauper’s section of St. Louis Cemetery #1. 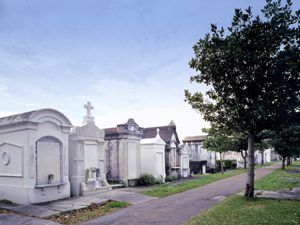 City of the Dead, New Orleans

More than a century later, he is said to still be looking for his family tomb. He is often seen walking in the burial ground, described as being tall, with blue eyes, wearing a white shirt. Though he appears looking disheveled and lost, he is also said to be in full, solid form, and very much alive. Reports tell that he asks visitors if they know the location of the Vignes tomb. Sometimes this spirit will tap the living on the shoulder, and ask, “Do you know anything about this Tomb here?” Another story says that he sometimes even shows up at funerals asking mourners if there is any room in the tomb for him. But his most often heard statement is “I need to rest!” His image is said to have been caught on camera and his voice on EVP.

Another lost ghost is that of a man named Alphonse. Like Henry, he also appears lost. He has been known to approach visitors in a friendly way and asks them to help him find his way home. He has also been seen a number of times gathering the flowers off of other graves and placing them on his own tomb. It is thought that he may have been murdered or betrayed by someone of the Pinead family, for he warns visitors to stay away from that tomb. Though he is often known to smile, the restless and lost soul often begins to cry just before he disappears.

These are not the only ghosts to haunt the cemetery — there are said to be hundreds. Reports tell of phantom figures including soldiers in uniform, yellow fever victims, and others who appear both night and day. Interestingly, the burial ground is also home to a number of unearthly dogs and cats which are said to have once belonged to a former caretaker. They are often said to lurk near the St. Louis No. 2 cemetery as that was where their owner was buried.

One question often asked of visitors is the reason for the fine china dishware and ornate silverware found throughout the graveyard. This is part of the ancient Wiccan practice called the” Dumb Supper”. In this old ritual, a mock table setting is placed for the departed as well as a visitor who has questions for their lost one. These settings may also include real food, wine glasses, bottles of wine or liquor, and more.