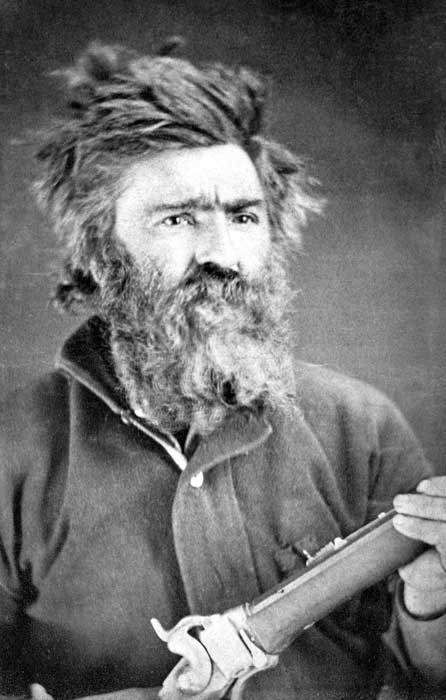 John “Liver-Eating” Johnson is known in history as a sailor, mountain man, Indian fighter, and lawman who earned the moniker of “Liver-Eating” because he allegedly killed several Crow Indians and ate their livers.

His real name was William Garrison, and he was born in Little York, New Jersey, in July of 1824 to Isaac Garrison and Eliza Mettler.

He joined the Navy during the Mexican-American War, but after striking an officer, he deserted and changed his name to John Johnston. He then traveled to Montana, where he worked as a trapper, miner, wagon master, scout, tour guide, whiskey peddler, and supplier of cordwood to passing steamboats. He also served with the Union during the Civil War. He had a brother named John, that was killed at Cold Harbor, Virginia, during the war.

Johnston is purported to have married a Flathead woman named the Swan, who was said to have been killed by the Crow. He then supposedly waged a personal war against the Crow, killing any Crow warrior he saw. Neither of these legends occurred because Johnston’s military records tell us he was a sailor, on board a ship, during the Mexican American War. Similarly, Johnston never did eat anyone’s liver. One day during a Sioux battle, he jokingly told his companions he had eaten a piece of liver. Hence, his nickname, “Liver-Eating” Johnson,” was earned through a macabre joke.

Johnston became the constable of Coulson/Billings, Montana, in the early 1880s. He also served as a town marshal in Red Lodge, Montana, in the 1890s. In December 1899, he was admitted to a veteran’s hospital in Los Angeles, California, where he died of peritonitis on January 21, 1900. He was buried in nearby Sawtelle National Cemetery.

However, in the early 1970s, his body was moved to Cody, Wyoming, where it now rests at Old Trail Town with several other local old west characters. Several legends surround Johnston, some of which are the basis for the movie Jeremiah Johnson.