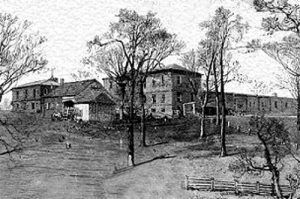 In the late 1830s, the United States Government established the Liberty Arsenal in Liberty, Missouri, a town settled in the 1820s, primarily by southern pioneers. This alleviated many fears of the residents who constantly worried about Indian raids. With the militia guarding the arsenal, the Indians stayed away. But, the town of Liberty had more to fear.

Though the city was mostly populated with southern sympathizers, the arsenal was raided by proslavery men during the Kansas-Missouri Border War in 1855.

Surprisingly, when the Civil War broke out, Missouri voted to stay with the Union, even though the state was filled with a Confederate minded population. This placed the state in a war within its own borders. The arsenal was raided again on April 20, 1861, by about 200 men from Clay and Jackson Counties. The Southern sympathizers captured about 1,000 muskets, four brass field pieces and a small amount of ammunition. It was the first civilian Civil War hostility against the Federal government in the State.

The munitions were to be hidden at the home of Henry Lewis Routt near what is now William Jewell College. Routt was eventually captured and tried for treason, found guilty in a military trial and sentenced to hang. But, friends on both the Confederate and Union sides interceded and President Abraham Lincoln issued a pardon, one of the earliest of wartime acts of mercy.

Instead, a large proportion of the arms were shipped upriver to the charge of St. Joseph Mayor M. Jeff Thompson. The arms were distributed to Missouri Militiamen and later to the Missouri State Guard. The four brass field pieces became Captain Henry Guibor’s State Guard battery.

Today, there is nothing left of the Liberty Arsenal that was once located at Liberty Landing on the Missouri River.

Missouri in the Civil War